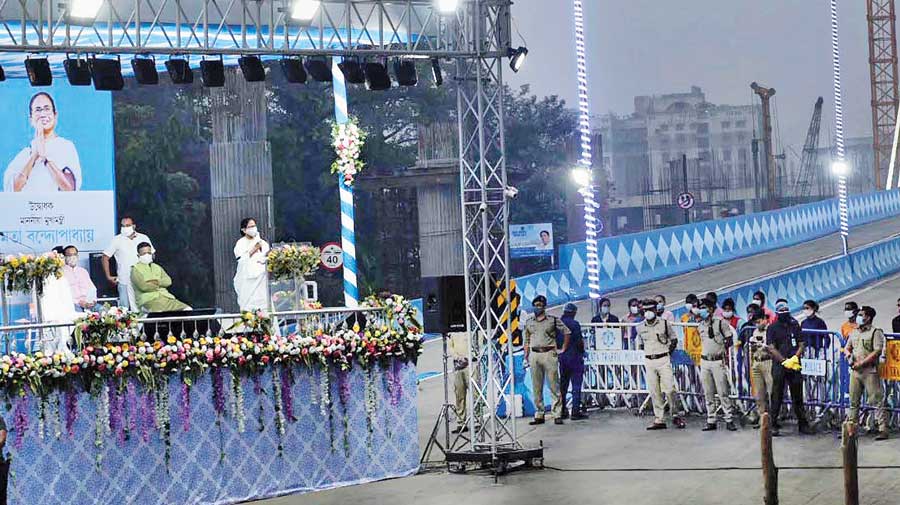 Pedestrians, not cars, took over the Majerhat bridge after it was inaugurated by chief minister Mamata Banerjee on Thursday evening.

The bridge was closed for vehicular traffic till 10.30pm because the dismantling of the giant dais at the Taratala end took a lot of time. A traffic officer said the bridge was unlikely to be opened for vehicles till early Friday.

Barricades with guardrails were placed at both ends of the bridge. Cops posted at the barricades kept telling motorists that the bridge would be opened “shortly” once the dais was cleared. The gathering at the inauguration of the bridge
Bishwarup Dutta

“You have waited for over two years. A couple of extra hours is nothing,” one policeman told a biker coming from Mominpore.

But hundreds of people descended on the 650m-long bridge soon after the VIP convoys left.

In swarms, people walked up and down the bridge, glowing in miniature lights and decked out in a fresh coat of blue and white.

The bridge, or what remained of it, was witness to a bigger turnout on September 4, 2018. A portion of the structure had just collapsed.

Two years ago, the mood was chaotic. Many people had come looking for “missing” relatives and friends. A heavy contingent of cops struggled to keep people at bay.

On Thursday, the mood was similar to that at a promenade along a seafront. Most of the pedestrians had their phones in their outstretched hands. Some kept taking pictures and others made video calls to near and dear ones to share the “inaugural experience”.

“I am making a WhatsApp video call. Please answer it,” a middle-aged man was heard telling over the phone.

The cops stopped a couple of cyclists from taking the bridge. But on the Mominpore-bound approach road, a young girl was trying her hands on a scooty under the watchful eyes of her father.

A man on a cycle was selling tea and doing multiple rounds of the bridge.

The pedestrians included children and grown-ups.

A group of teenagers, bags slung on their shoulders, posed for a group picture, after requesting another passer-by to click.

Many pedestrians on the bridge had helmets in their hands. They had parked their two-wheelers on Diamond Harbour Road to take a stroll on the bridge.

The crowd was denser as one approached the 260m deck slab of the bridge, held by 84 cables — imported from Switzerland — supported by towering pylons. A string of blue and white miniature lights fixed to the lamp posts and wrapped around the cables provided ample illumination.

A mother and her daughter in joggers clicked pictures of the giant cables.

“We go out for a run every evening. We were drawn here by the carnivalesque ambience,” the 12-year-old girl, a New Alipore resident, told Metro.

The deck slab stands over the railway tracks that lead to the Majerhat station. The honking of an approaching train prompted many pedestrians to look over the boundary walls of the bridge.

At the Taratala end of the bridge, a group of men were busy dismantling the blue and white dais.

Scores of food packets were stacked on top of a boundary wall. Two men were transferring them to the boot of a car.