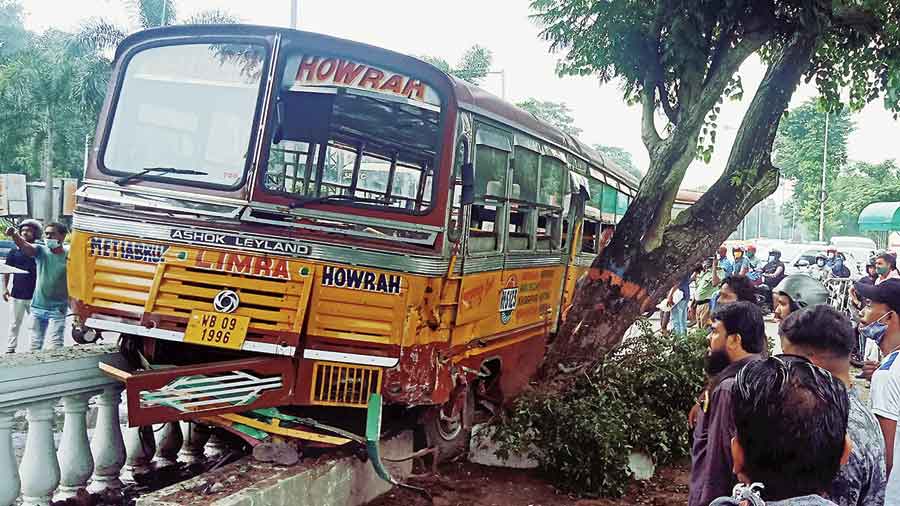 One of the few buses that rolled out on Thursday hit a biker in front of Fort William and crashed into the balustrades along Red Road on the way to Esplanade.

The motorcyclist was Vivekananda Dab, a constable of the reserve force of Calcutta police. He died on the spot.

At least 14 passengers on the minibus, plying on the Metiabruz-Howrah route, were injured. They were taken to SSKM Hospital, where doctors said the condition of some of the injured was critical.

Several passengers told police the driver appeared to have lost control of the bus. “Many of the passengers are saying a brake failure led to the accident. But this can be ascertained only after the bus is subjected to a mechanical test,” an officer in the traffic department said.

Witnesses said the bus and the motorcycle both were heading towards Esplanade, when the bus apparently hit the two-wheeler from the rear seconds before crashing into balustrades outside Fort William.

The motorcyclist fell under the bus and could be extricated only after three cranes lifted the mangled remains of the bus. Such was the impact of the crash with the concrete guard wall that the seats of the minibus were dislodged.

A critically injured Dab, 45, was taken to SSKM Hospital, where he was declared dead.

The police said all the injured who were taken to SSKM had been identified. None of them was apparently the driver.

“The driver is yet to be identified or tracked down,” an officer said on Thursday night.

Ten of the injured, some of whom suffered fractures, have been admitted to the hospital. The remaining four were discharged after treatment.

Buses were back on the roads, though in far fewer numbers than expected, on Thursday for the first time since May 16, when a temporary ban was imposed on public transport as a precaution against Covid.

Several automobile engineers and maintenance experts Metro spoke to said vehicles that remain stationary for weeks should undergo checks before they are allowed to ferry passengers.

The rubber of the tyres tends to go dry if left unused for several weeks. So, the tyres need a thorough check. Else, the tube may burst or parts of the rubber from the edges will come off, resulting in a disbalance.

“The mobile content of the engine needs to be checked and the steering must be examined to ensure it is properly lubricated. The steering may get locked or the engine may get heated causing various problems,” said an official in the transport department who oversees fitness tests of heavy vehicles.

“There can be a world of issues starting with steering lock to uneven flow of fuel to the engine from the tank. Most bus drivers are aware which items demand maintenance but tend to overlook the issue,” he said.

“The fatal squad of the traffic police has taken over the investigation of the case. A case has been started. The sequence of events will be clearer once the driver is found,” said an officer.