Maidul Islam Middya, 33, was allegedly beaten up by cops during the foiled Nabanna march last week 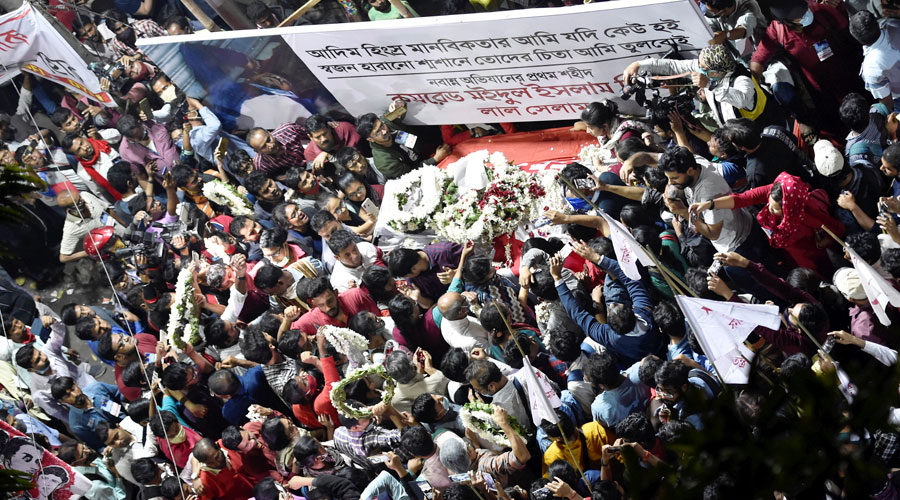 Maidul Islam Middya, a 33-year-old DYFI leader who took part in a protest on Thursday in Calcutta that witnessed clashes between the police and Left supporters, died in a nursing home on Monday morning.

A preliminary post-mortem report said no internal injury had been found, according to the police.

But the Left and the Congress said Maidul, an auto-rickshaw driver and the sole breadwinner of his family, was beaten up by the police during the foiled Nabanna march last week seeking jobs.

When chief minister Mamata Banerjee’s attention was drawn to the death, she said at Nabanna: “Any death is unfortunate. We will have to identify the true cause of the death. If anyone from his family is willing, we will offer a job.”

Mamata added that she had spoken to CPM legislator Sujan Chakraborty on the subject.

The backlash against the death brought hundreds of Left supporters to the streets in the run-up to the elections. At least one policeman was roughed up and heated exchanges took place.

The DYFI and the SFI have given a call to demonstrate in front of all the police stations in the state on Tuesday to protest the death.

“The preliminary post-mortem report suggests superficial abrasion on the knee of the deceased person,” a police officer at Lalbazar said. “There were no internal injuries to any organ.”

CPM leaders said Maidul, who hailed from Bankura’s Kotulpur, died at the Calcutta nursing home from injuries suffered when the police lathi-charged members of Left student and youth organisations.

“The lone breadwinner for a family of six, Maidul was initially admitted to my hospital on Thursday. He was shifted to another hospital on Sunday but he died of injuries suffered during the police lathi-charge,” said CPM leader and doctor Fuad Halim.

Halim said Maidul had been referred to another hospital on Sunday because medical tests had shown that his condition had deteriorated.

Maidul’s death sparked outrage across the state with Left leaders and supporters coming out on the streets to condemn the “unprovoked brutality of the police on youths demanding jobs”.

At Nabanna, Mamata asked why the police station concerned was not informed of the injury.

“I heard that his family wasn’t informed until February 13, while the incident took place on February 11. No police complaint has been registered so far,” Mamata added.
A large number of DYFI and SFI supporters gathered in front of their organisational headquarters at Entally to pay their last respects to Maidul on Monday.

Hours before the body arrived, some Left supporters got into a heated argument with the few policemen who had turned up to manage the crowd. While a policeman managed to run away as tempers rose, another was caught and roughed up. Later, SFI leader Srijan Bhattacharya whisked the cop away to safety.

Bhattacharya said the two officers had insulted Maidul’s “sacrifice” and this had angered those who had come to pay their respects to the departed leader. “The policeman should be grateful that we were there. We saved him from the angry mob,” he added.

Another heated exchange took place at the Calcutta Police Morgue near College Street. CPM leaders Mohammad Salim and Chakraborty had to intervene to calm the supporters. Left leaders hinted that they would move court.

A senior officer at Lalbazar said later in the evening that a case would be started against unknown persons for assaulting policemen.