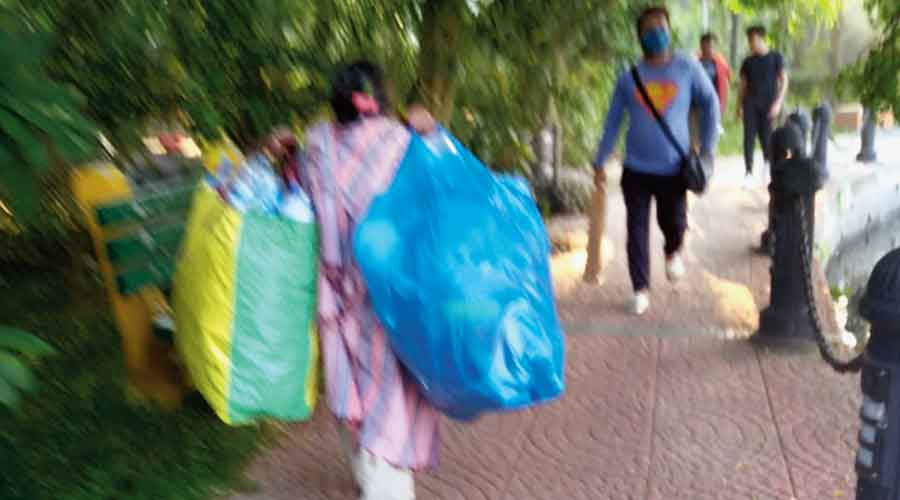 A woman carries bags full of plastic bottles that she picked up from inside Rabindra Sarobar. Daily visitors said she was helping keep the place clean of plastic left behind
Telegraph picture
Subhajoy Roy   |   Calcutta   |   Published 02.12.20, 02:37 AM

Regular visitors to Rabindra Sarobar have complained that an increasing volume of plastic bags and bottles is being dumped on the premises and the authorities are not doing much to stop the practice.

They are surprised that despite the park opening for only about six hours a day, so many plastic bags and bottles are still found strewn across the complex.

Some of the plastic waste ends up in the water, blown by the wind. Environment scientists said the waste can suffocate aquatic life.

The water body in the 192-acre Rabindra Sarobar compound is spread across 73 acres.

Somendra Ghosh, a daily visitor to the lake, noticed a plastic container, a plastic bottle and a garland floating on the water on Sunday. Ghosh said he had also noticed plastic bottles strewn around the place in large numbers.

Ghosh noticed a woman picking plastic bottles on the Sarobar premises on Sunday. By the time she was leaving, she had two bags filled with plastic bottles. “It shows how irresponsible some visitors are. The woman and people like her are actually helping keep Rabindra Sarobar clean of plastic waste,” he said.

The plastic that goes into the water is a threat to aquatic life. The plastic that remains in the soil can damage the top soil and turn the portion into a barren stretch.

Some plastic waste floats in the water
Telegraph picture

“The lake is home to a variety of turtles and fish. They will choke to death if they swallow plastic,” said Parthib Basu, a professor of zoology at Calcutta University, who specialises in ecology. “The plastic that remains stuck in the soil will destroy the topsoil, which is rich in all the vital nutrients plants need.

The top 1 feet of the soil contains all the beneficial microbes.

Since plastic does not decompose easily, it will turn the portion where it lies into a barren stretch,” said Basu.

Micro plastic — the torn smaller parts of a plastic bag — are hazardous for microorganisms, he said. Once in water, micro plastic releases toxic substances or can choke insects and other beings that are an important part of the ecosystem.

The Sarobar is home to three species of turtles, Common Toads, Bullfrogs, Cricket Frogs, Skittering Frogs, squirrels, about 60 species of butterflies, about 30 species of dragonflies and snakes.

Though Rabindra Sarobar has been declared as a no-plastic zone by the Calcutta Metropolitan Development Authority (CMDA), many visitors freely walk in with plastic bottles and bags. Regular visitors alleged that security personnel do not stop visitors to find out whether they are carrying any plastic item.

A CMDA official said it was not possible for guards to check the bag of each and every person because entry was free.

Sumita Banerjee, another daily visitor to the place, said she was surprised with the behaviour of those who dump the waste in the place. “The park is now open for three hours in the morning and three hours in the afternoon. Despite the short duration, people manage to defile the place. I think the only way to stop them is not allowing any plastic bag, bottle or container into the Sarobar,” she said.

Another CMDA official said the organisation had “installed plastic crusher machines inside the Sarobar so that plastic bottles are put inside them and crushed, and they do not fall in the water or lie scattered around the place”.

“We can consider imposing a penalty on people who are found to dump plastic waste inside the Sarobar,” said another CMDA official.