Drive to end abuse of children

Awareness campaign to be followed by parent counselling 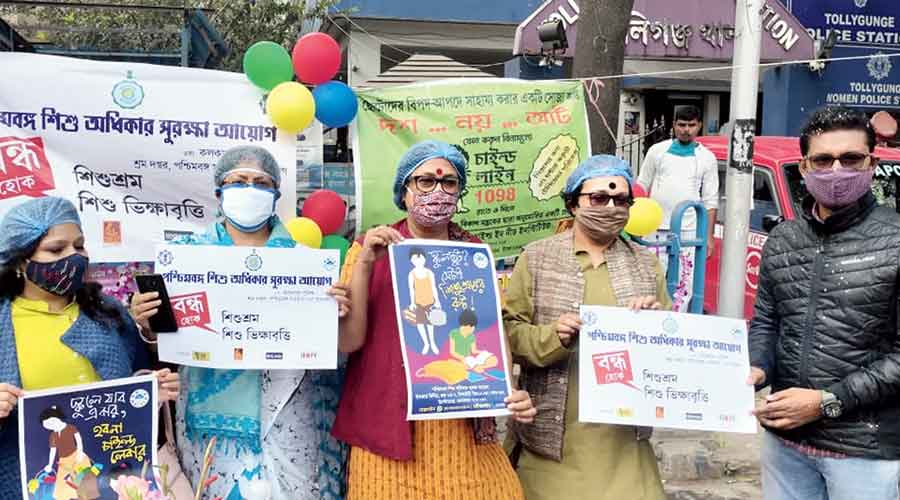 A drive to eradicate child labour and begging by children in Calcutta was launched on Wednesday.

The state commission for protection of child rights, Calcutta police, state labour department and several NGOs have come together for the initiative, which will include awareness campaigns and counselling of parents.

“Whenever we go down certain streets we see children begging or selling balloons and the campaign is to eradicate that,” said Ananya Chatterjee Chakraborti, the chairperson of the West Bengal Commission for Protection of Child Rights (WBPCR).

The drive, she said, will continue for several months.

The campaign started in front of Tollygunge police station and the group walked to the Rashbehari Avenue crossing, and from there to Southern Avenue. Members of the group talked to some of the families who live by the roadside.

Awareness campaign and sensitisation are the first step of the initiative, which will be followed by counselling of parents, Chatterjee Chakraborti said. “If it still continues, we will produce the children in front of the Child Welfare Committee and try to stop it…. It is a difficult task but we have to make genuine efforts to stop it,” she said.

“All stakeholders, from parents of children to those who employ children as domestic help, will have to be aware of the problem. During the pandemic, when schools are closed, there is a propensity (among children) to go out to work or beg to earn some pocket money,” said Bhattacharyya.

Announcements were being made from the procession that making children beg or work to earn money is a punishable offence, children should be sent to school, no child should be deprived of his or her right and one should not encourage begging by giving money.

“People need to understand that they should not encourage begging by giving money to children…. Even if one person makes note of what we are trying to say, it will help the cause,” said Mahuya Santra, a consultant at the West Bengal Commission for Protection of Child Rights.

From Thursday, announcements to discourage child labour and begging by children will be made from vehicles in pockets of Gariahat.