Of the 18 buildings contained on a blind lane housing BE 232 to 249, there are three houses where residents have been detected Covid-19 positive 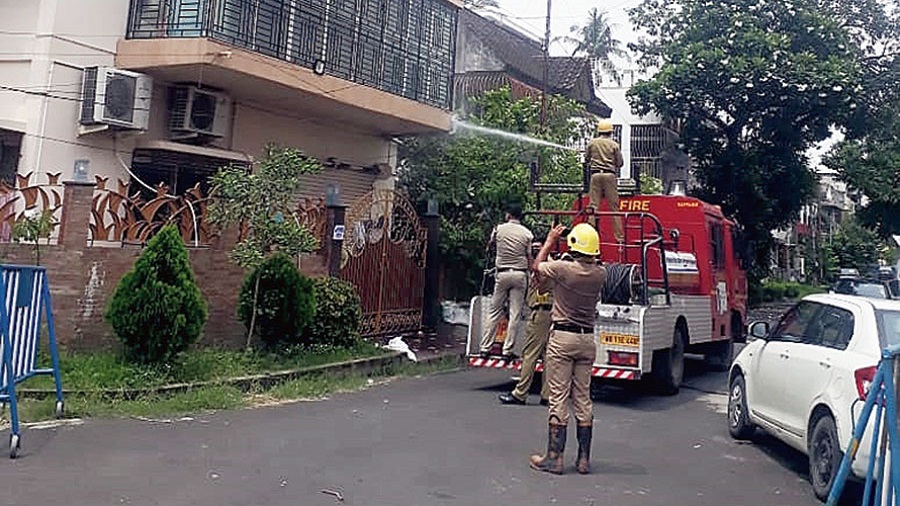 Of the 18 buildings contained on a blind lane housing BE 232 to 249, there are three houses where residents have been detected Covid-19 positive. “There are six members in one family and five in another so far. In the third house, family members of the sole patient are supposed to go for tests this week,” said president of the BE Block Nagarik Sangha Basab Aich. This is the only stretch in Salt Lake that has been contained, the other containment addresses being individual buildings.

“The resident of the only building deep inside the lane who has tested positive was in hospital all along. His family members have already served out the quarantine period. The only active cases in our lane are in two buildings facing each other at the entry point. Since the guard rails are placed there, the home delivery folk stop there and call us to collect food or whatever else we order. So we have to trudge all the way to a stretch of the road that is flanked by two infected houses.

The delivery boys too have to wait there. This is rather unsafe,” argued a resident on condition of anonymity, urging for the restrictions to be withdrawn. Several residents of the stretch have raised the matter with the block forum.

But they are unlikely to get their way right now as a new order issued on Tuesday mandates the “rigours of containment in the earmarked containment zones” to be extended till July 19.

However, there is hope for the residents in a clarification that the police gave when The Telegraph Salt Lake raised the issue. “We have allowed delivery personnel, including vegetable vendors with cycle vans, to physically remove a barricade, reach in front of the customers’ houses inside the containment zone, make the delivery and replace the barricade on the way out. But the residents are not to come out of the containment zone under any circumstance,” said a police officer, adding that the information had been publicised in the area through loud hailers.

The unavailability of block-wise records with the administration may not allow the confirmation of BE Block’s status as the block most affected by Covid-19 in the planned residential area of Salt Lake but it is undoubtedly among those with the maximum number of containment zones. According to block association sources, the number of infected residents totals 23, including 21 active ones, till Wednesday.

Faced with so many residents taking ill, the association has formed a self-help group comprising seven residents who would provide support to the affected families and their immediate neighbours. “They have been given our contact numbers. If they need ambulance or medicines in the middle of the night we have offered to arrange for the same,” said Aich.

The block has been sanitised several times. “Bidhannagar Municipal Corporation has done it twice, the fire and emergency services department did it in AE and CE markets as well as the main road and most recently in the containment zones. Even we from the block association arranged to borrow a sanitising machine from AE Block and got the job done once,” said Aich.

The police are doing their bit. “The Bidhannagar North police station has been helping out. During the initial days of lockdown, our people have shopped for affected families which could not arrange for supplies and even sent materials required for funeral of a family member,” said a senior police officer.