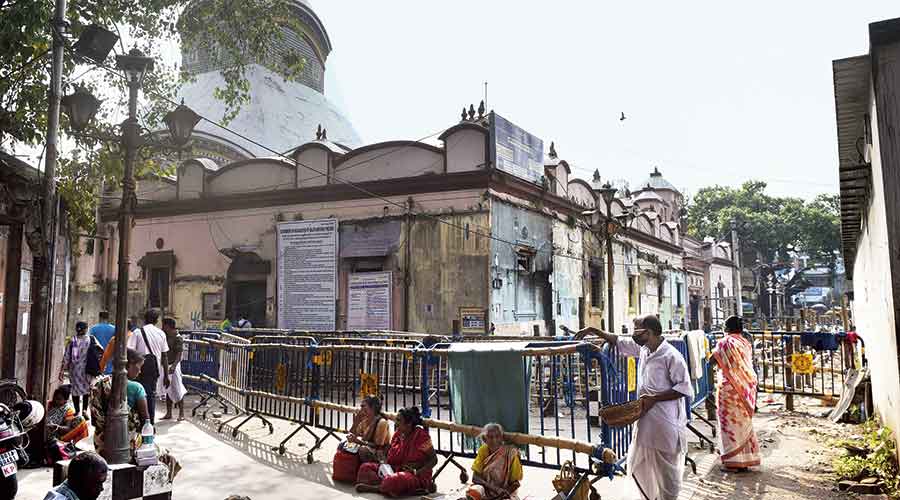 The sanctum sanctorum at the Dakshineswar and Kalighat temples will be out of bounds to visitors this Kali Puja, temple authorities and police have decided.

Devotees will not be allowed to gather on the temple premises as well throughout the day. Visitors will be scanned and there will be special police arrangements at both the temples to ensure there are not more than 50 people in a queue at any point of time.

At Dakshineswar, the puja won’t be live-streamed to giant LED screens at night like previous years to avoid crowds. At Kalighat, no offering will reach the deity from outside.

Police officers in Calcutta and the Barrackpore commissionerate have chalked out plans to restrict crowd at both the temples on the day of Kali Puja. Calcutta High Court has said the police will have to ensure “Covid protocol is maintained”.

“The local administration and the police will ensure there is no overcrowding within the temple precincts or outside,” the court said on October 5.

At Dakshineswar, cops will be posted at the entrance to the skywalk and the main temple to ensure all visitors are in masks and their body temperatures have been scanned by temple committee volunteers.

A team of police officers will take their position before the temple opens at 6am to ensure there is no gathering of people at various points, including the dala arcade and the ghats.
The nutt-mandir on the temple premises opposite the one that houses the Kali idol will be turned into a “no-entry zone”. Even the Shiva temples on the main temple premises will remain inaccessible to visitors.

On Kali Puja, Dakshineswar usually attracts close to 70,000 people on average and people gather at the nutt mandir to catch a glimpse of the idol. Many even sit and pray at the nutt-mandir.

“Visitors will not be allowed to stand and watch the puja proceedings from inside the temple complex,” an officer of the Barrackpore commissionerate said.

There will be separate entry and exit gates and everyone will be asked to move once they are through with their offerings, the police and the temple administration have decided.

A queue at Dakshineswar temple

“We will tell people this year is different because of the pandemic and everyone will have to adjust to the new normal.”

The Panchabati Complex adjoining the temple in Dakshineswar will be shut and no one will be allowed to enter Sri Ramakrishna Paramahamsa’s room to the temple’s north-west.

Officers will keep tabs on the crowd count from time to time and all key corners will have police presence.

At Kalighat, the police have decided to allow visitors through Gate No. 2. Gate No. 4 to the east of the Sebait ghat will act as the exit gate.

Moveable crash barriers have been placed outside both the gates to ensure restricted entry/exit and banners with instructions for the prevention of Covid have been fixed. “We will not allow any offering from outside to touch the deity at the sanctum sanctorum. Unlike previous years no one will be allowed inside to touch Kali Ma,” Bidyut Halder of the Kalighat Temple Committee said.

On the day of Kali Puja, cops and members of the Kalighat Temple Committee have decided to open the temple from 6am to 1pm and 4pm to 9pm.

Cops will be posted along Kali Temple Road right up to the main temple to prevent crowding of visitors. “CCTV cameras will capture the movement of devotees and there will be cops to ensure no one tries to perform puja outside the temple with a priest,” a city police officer said. “An armed police contingent will be posted around the temple.”