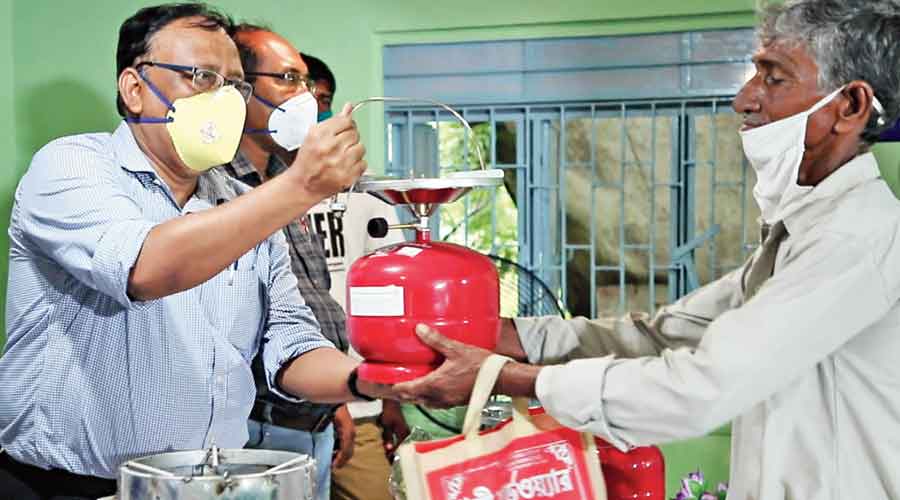 Mini-LPG cylinders being distributed in the Basirhat sub-division of the Sunderbans on Friday.
Pictures courtesy: SHER
Debraj Mitra   |   Calcutta   |   Published 10.08.20, 02:07 AM

One hundred mini-LPG cylinders will be distributed to fishermen in the Sunderbans so that they don’t have to venture into the forests for firewood to cook on the boat during their fishing trips, said foresters.

Fishermen, five or more in one boat, set out to catch fish from the rivers surrounding the mangrove delta. The journeys typically last over a week. The daily catch is stored in ice boxes on the boats.

Every now and then, the boats are anchored and the men enter the forests to collect firewood for cooking on the boat. Tigers cannot attack a boat on the river but inside the forests, the men are vulnerable to attacks, said forest officials.

In the first lot, 25 mini-LPG cylinders with stoves fitted atop were provided to as many licensed fishing boats in the Basirhat division of the Sunderbans Tiger Reserve on Friday.

“For now, the pilot project will cover 100 boat license certificate (BLC)-holders in the tiger reserve,” said Tapas Das, the field director of the Sunderbans Tiger Reserve.

“The traditional earthen stoves run on dry firewood. In the wet conditions in the Sunderbans, it is difficult to find dry firewood unless one ventures deep into the forest. Whenever they run out of firewood, fishermen are forced to anchor the boat and enter deep into the forest with sharp tools. That increases the risk of conflict, making both the tigers and the men vulnerable. This project aims to enable the fishermen to cook on their boats without having to enter the forests,” said Joydip Kundu of the Society for Heritage & Ecological Research (SHER), an NGO that works to reduce human-wildlife conflict.

The cylinders are being supplied by the organisation. The forest department has prepared the list of recipients and is coordinating the distribution. Each cylinder comes with a stove and a metal case for support to provide stability in choppy waters.

“A boat usually stays on the river for a week to 10 days. Each cylinder would last a fortnight. After that, it has to be refuelled,” said Kundu.

Sources in the forest department said over 10 persons have died in tiger attacks in the Sunderbans this year. Though no official record is available, researchers working on tiger attacks feel there have been about 3,000 such deaths since the 1980s.

“If the project is successful, it can be a model for the entire Sunderbans. But it has to be implemented efficiently,” said Ravi Kant Sinha, the chief wildlife warden of Bengal.

The onus would be on ensuring that the fishermen use these cylinders on the boat and don’t keep them at home, he said.