The help is not limited to food and dry ration, also includes clothes and medicines 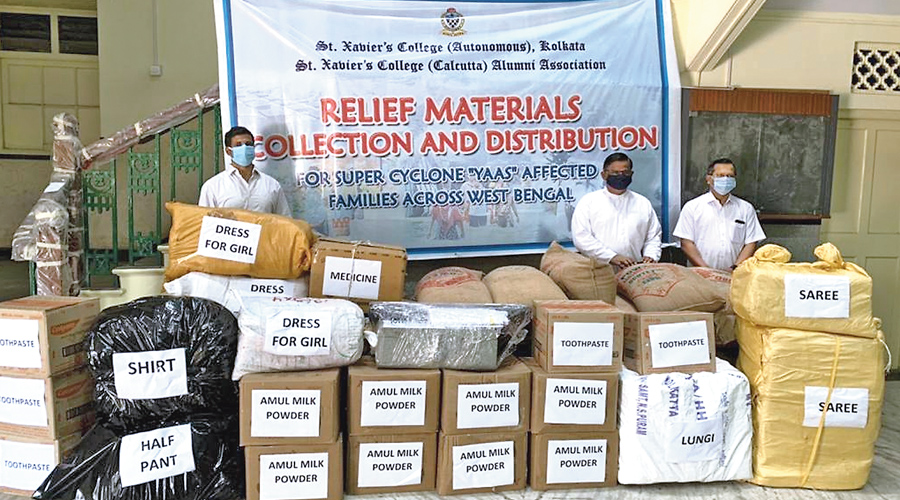 A consignment of relief materials at St Xavier’s College before being taken to East Midnapore.
Telegraph picture
Our Special Correspondent   |   Calcutta   |   Published 10.06.21, 02:01 AM

A relief campaign, led by Jesuit priests, has been feeding 1,500 people every day in pockets of East Midnapore that were devastated by Cyclone Yaas.

A team of volunteers from the St Xavier’s College Alumni Association stationed there hasbeen organising a camp everyday to provide hot meals toaround 1,500 residents of Contai and Ramnagar-I. Around150 quintals of cereals, potatoes and other vegetables havealso been sent to Ramnagar-IIand Khejuri-I.

The Jesuit priests of St Xavier’s are at the helm of the relief campaign.

Reverend Father Dominic Savio, the principal of the college and the president of the alumni association, took it upon himself to appeal to former students, benefactors and well-wishers of the college for contributions, said an organiser.

“The whole world is in distress and most importantly our state of Bengal has been repeatedly hit by back-to-back natural calamities apart from the pandemic. People should shower love and share their comfort with others with greater intensity at this crisis period...,” said Father Savio.

The alumni association is organising the camps with the local administration.

The help from St Xavier’s is not limited to food and dry ration. The consignments sent to East Midnapore included clothes and medicines. On June 5, medical camps were organised in multiple blocks.

“We will hold relief camps in Gosaba and Basanti of South 24-Parganas soon,” said an organiser.