According to port officials, large parts of Calcutta were spared inundation as there was no heavy rain 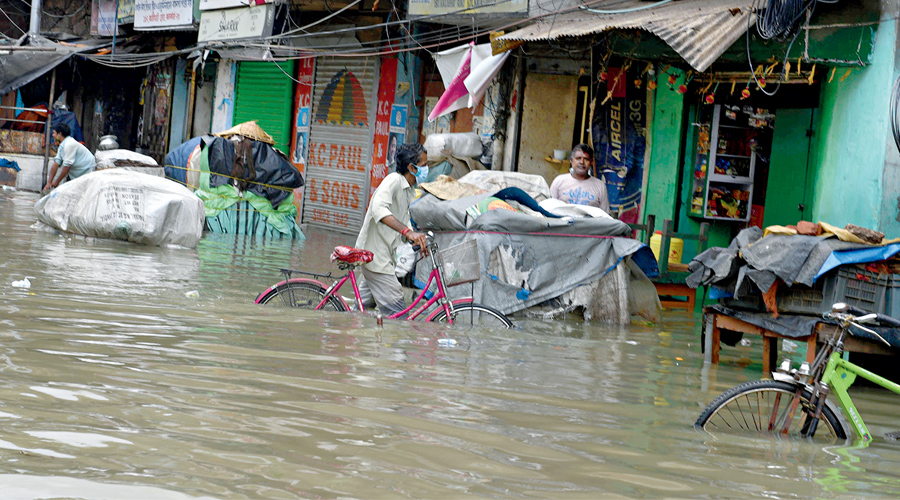 The water level in the Hooghly rose above the predicted 7 metres from the low tide level on Wednesday but the absence of heavy rain spared large parts of Calcutta from being waterlogged.

A few pockets such as Kalighat and Chetla did get flooded but those areas often go under water during high tide, when Tolly’s Nullah overflows its banks.

Port officials said large parts of Calcutta were spared inundation because there was no heavy rain.

Calcutta recorded around 25mm of rain in Alipore from 8.30pm on Tuesday to 8.30pm on Wednesday. The forecast was for “heavy rain”, which means 60mm or above in 24 hours.

Calcutta Port Trust officials said the water level in the Hooghly in Garden Reach rose to 7.3 metres — around 24 feet — around 1pm.

“That was way above what we have recorded in recent years. The cyclone and full moon together were responsible for the surge,” said an official.

“Water gushed over the lock gates at the Netaji Subhas dock and the Khidderpore dock in Calcutta and also in Haldia, a phenomenon we have not observed in two decades. This was primarily because of the timing of the high tide, which almost coincided with the landfall of Cyclone Yaas,” the official said.

The lock gates of Calcutta Port Trust prevent the entry of excess water from the Hooghly into the docks, where ships are usually parked during cyclones.

Veteran port officials said the volume of water displaced by Yaas in the sea multiplied several times when it entered the Hooghly. Since the expanse of the river is not as large as a sea, the

“Several jetties, including the one at Ramkrishnapur in Howrah, and a few others in and around the Sunderbans and in Dulduli in North 24-Parganas were completely submerged,” said an official of the Inland Water Transport department.

“During Amphan, several jetties were heavily damaged and the pontoons had suffered cracks. But they were not completely inundated like they did on Wednesday.”

The sluice gates in Calcutta, which are located at points where the outlet channels of the city’s drainage network meet the Hooghly, were closed early on Wednesday. Engineers from the Calcutta Municipal Corporation (CMC) said they wanted to ensure that river water didn’t fill the underground drainage network.

Engineers said the heavy inflow, because of the water level in the river reaching exceptionally high levels during high tide, stretched the city’s underground network but its effect was not felt as the city received only moderate rainfall.

“Water rushed through Tolly’s Nullah, inundating parts of Chetla and Kalighat in the afternoon. But that was expected,” said an engineer of the CMC’s drainage department.

“But several other pockets across parts of Nadial, Garden Reach and Metiaburuz were not flooded.”

Police officers went aro-und parts of the Chitpore, South Port and Garden Reach area asking residents to stay at home or move to safe shelters during the high tide at night.