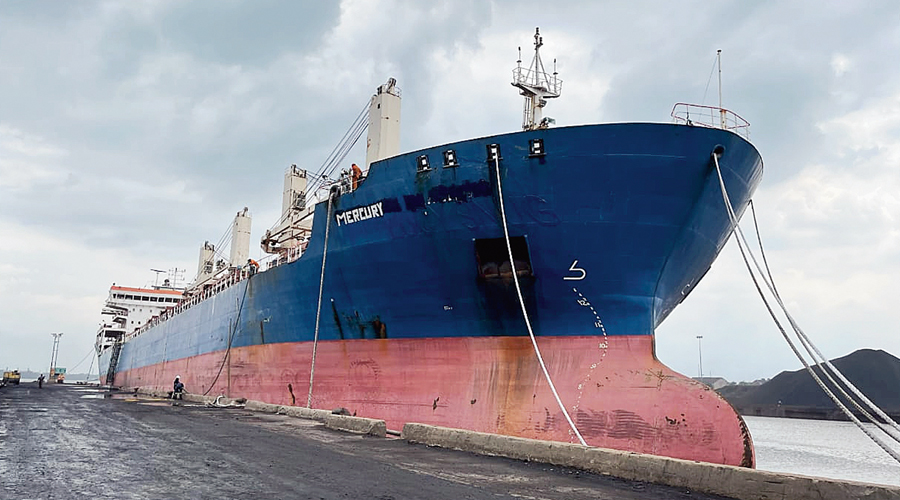 Taking lessons from its experience while facing Cyclone Amphan last year, Calcutta Port Trust has decided to take a number of steps to minimise the impact of Yaas on the city.

The port trust has set up satellite phones, procured diesel-run wood cutters and installed generator sets in control rooms and at other strategic locations.

"We don't want to miss out on any information or updates this time. We have learnt our lesson from last year’s experience (during Amphan) and decided to secure our networks using eight satellite phones," said Vinit Kumar, the chairman of Calcutta Port Trust.

Immediately after Amphan, communication was snapped because telecom companies' network systems had collapsed. So, contacts between the port trust's control centres in Haldia and Sagar Islands and the main control room in Calcutta were snapped.

The satellite phones have been distributed among personnel in control rooms in Calcutta, Haldia and Sagar Islands.

Besides, 18 diesel-run wood cutters have been bought to facilitate removal of fallen trees after the storm blows over and diesel generator sets have been stationed in control rooms and other strategic locations.

Pay loaders have been hired to remove debris and all jetties have been closed as a precautionary step.

Senior officials of the port trust said they had been in touch with the Bengal government around the clock. Temporary shelters to accommodate people who will be displaced by the storm are being set up on war footing at several places along the Bay of Bengal. One such accommodation is being set up at Sagar Islands.

The shelters will be functional from Tuesday.

Teams of senior officials of the port trust worked throughout Monday to clear sandheads, an island on the Bay of Bengal near Sagar Islands, nearly 40km from Haldia, of all ships.

Eight port-bound ships were navigated out of the proposed pathway of cyclone Yaas.

The port authorities have decided that no ships will be kept in river anchorages or jetties and all vessels will be taken inside docks before the arrival of the storm.

Inside the docks, the vessels will be secured with additional ropes and through other means, as laid down in the standard operating procedures.

By Tuesday, when entry of ships will be halted, the cranes and loaders will be secured to avoid damage to them.

"Arrangements have been made to accommodate 12 commercial ships inside the Calcutta dock and eight in Haldia so that no vessel comes in the path of the cyclone," Kumar said. "Seven ambulances fitted with oxygen have been kept ready."

Senior officials said that while entry of ships would be stopped from Tuesday morning, all cargo handling operations would be shut down from the afternoon and the workers shifted to safe accommodations.

The port hospital, which has close to 50 Covid-19 patients, has already stocked medicines, oxygen cylinders and food to last for at least three to four days.