Trek in cave of trees on Ballygunge Circular

Lessons learnt and re-learnt during journey 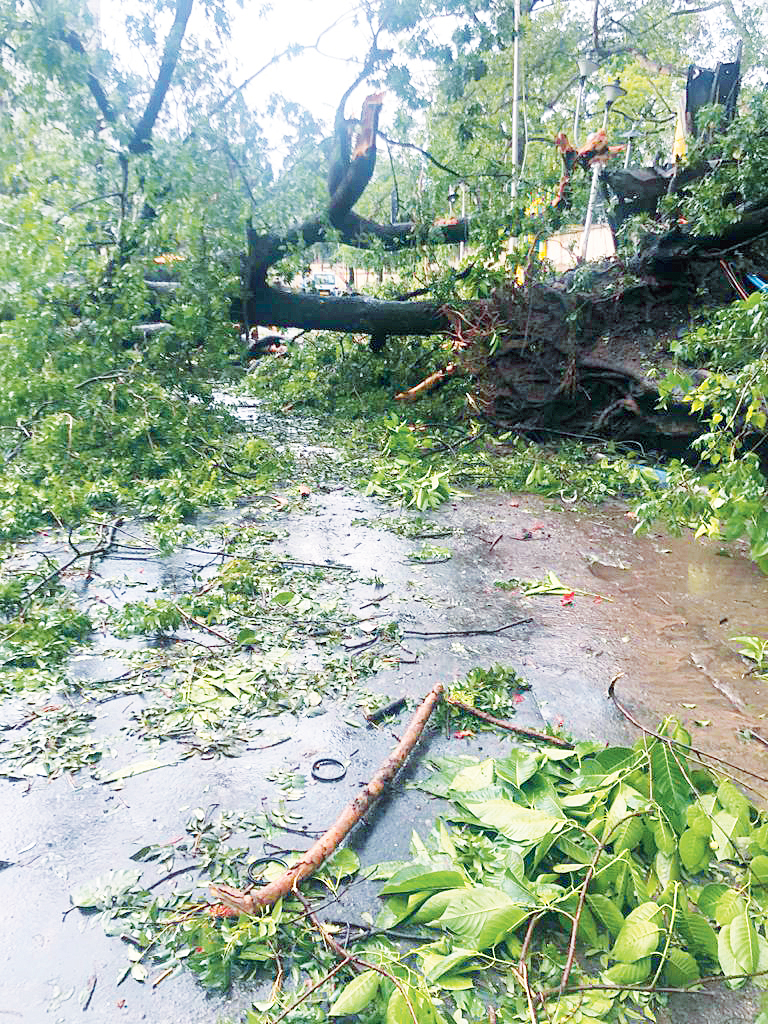 First the full disclosures: I am on the wrong side of 50, I weigh 120-kg-plus, my exercise is limited to squeezing the lemon wedge and shaking the bottle to extract the last drop from both and I generally detest movement, especially that of my limbs.

On Thursday afternoon, I had a problem: I had to reach my workplace on Bentinck Street, around 6km from my home on Dover Road, off Ballygunge Circular Road. Even for someone of my girth, it is a smooth ride every day, provided a car or the Metro is at your disposal and no rallies are lurking to lay an ambush.

That this Thursday would not be a cakewalk was evident as early as on Wednesday evening when Cyclone Amphan struck Calcutta and I could return home from work only at 10am on Thursday, clocking nearly 22 hours in office and picking my way the last quarter of a mile through uprooted trees.

I had returned home on Thursday morning via Park Circus and Ballygunge Phari, skirting Ballygunge Circular Road because any storm is usually not kind to the tree-lined curving stretch.

Around 3.30pm, I realised that my phone connections were off and I could not contact my office. I had to reach office for a deadline-driven job.

I hate movement but have been trained to think on my feet, like most of my colleagues. It did not take me long to decide to walk to office — 7km is not such a tall order. Braving sniggers at home, I borrowed my son’s waterproof sneakers and stepped in, only to realise that the soles could not take my weight and had come off.

Then I settled down on slippers to wade through the water, stripped my backpack like a bomber on a mission, including emptying the water bottle because every drop counts in adding to the weight, and stepped out. As soon as I was out of the gate, I realised that the water had receded a bit and the edges of the road were visible. Just 25 steps and the straps of the slippers were already biting into my feet.

I turned back — the mission aborted as soon as it had begun. I raced up the stairs, slipped into my forgotten Nike trainers with considerable effort and help from my wife and set out again, sharp at 4pm.

Houston, we have a problem again. A neighbour has taken out his car from the flooded garage and parked it exactly where there was a dry stretch, which would have seen me through without drenching my trainers and socks.

From the cobwebs of youth, a reminder from the NCC boot camp was beeping: come what may, keep your socks dry. Apparently, wet socks are recipe for disaster. Some soldiers give the matter as much importance as keeping their ammo dry.

I requested the neighbour to move the car a bit so that I could squeeze through between the wall and the vehicle and step into the main road with the socks still dry. As I gave a thumbs-up to the good neighbour, I think I heard him say: “Where are you off to? You can’t go far…. Ballygunge Circular Road is completely blocked.”

I assumed he must be talking about the road being inaccessible to vehicles and plodded on with whatever swagger a mass of 125kg can muster.

Once I was on Ballygunge Circular Road, one of my favourite stretches of Calcutta, I could sense something was wrong. As always, the light or the lack of it gives you a whisper of a foreboding. Then comes the sound.

Both were unsettling this afternoon. A canopy of darkness had descended on the wide road. Then there was the silence. Absolute silence born out of stillness — because no leaves were rustling. They could not because there was no wind. The road was like a cavernous dark-green cave, chiselled by an amateur who did not believe in modular shapes.

The foliage of the uprooted trees — with trunks that made my tummy look tiny — had intertwined themselves to form a leafy bubble.

From a distance, it looked like a gigantic and mouldy green wall, impenetrable and hostile. I felt trapped, overwhelmed and alone — and could sense dismay shaping up as a knot in my stomach. I would have to turn back, the second time within the hour.

But I plodded on — walking imperiously in the middle of Ballygunge Circular Road on a weekday, something I had not done even during any Left bandh — probably because that is what we all do when we don’t know what to do.

And the Archimedes bulb lit up in my couch-potato brain that had been washed clean of the muscle memory of my childhood days with trees.

There is a gap between the branches. Always. Perhaps I was looking too hard for something positive to tell or perhaps I had watched The Ten Commandments so many times that I am convinced the sea always parts when you think it won’t.

Again and again, there it was: a gap in the leaves and branches that I could squeeze through. An opening wide enough for my body mass and backpack survival kit.

Amid fallen tree after fallen tree, I found a gap — every time — on this Thursday afternoon.

This is not to say that it was smooth passage. The trunks were intimidating and slippery. Let alone stepping over them, if you placed your hand on them for support, your hand could slip and your armpit hit the solid wood with grievous consequences. Danger also lurked in the shape of wires of all thickness and colours.

By now I am breathing hard and sweating buckets. Worse, the corona-season mask is clouding my glasses with vapour and affecting my vision.

I paused in the middle of a foliage bubble, right in front of one of the most upscale apartments on the stretch, took off my backpack, placed it on a tree trunk and was about to sit down.

Something, I don’t know what, held me back, which probably saved me. Partially blinded, I was about to sit on a protruding branch that was split down the middle and was as pointed and sharp as the tip of a spear. The glistening wood was hidden by the deceptive foliage that had earlier camouflaged the gap.

Lesson number two from boot camp kicked in: push yourself to the limits during training but keep some energy in reserve in real-life situations. When you are tired, you lose the power to concentrate and you make mistakes — costly mistakes.

It was then that I noticed the wires lying in wait like snakes. Most looked like cables that pipe television programmes and Net connectivity to our homes. Could some be carrying power? I had no idea and I was not about to find out.

From then on, that became the obsession. How to thread and weave my way beneath and over wires hanging sometimes knee-high, sometimes overhead and sometimes coming ominously close to the neck like a garrotte.

Belated full disclosure: I am claustrophobic. In front of the Ballygunge military camp, a titan of a tree had fallen across the road.

I could find the gap easily — by now the hubris of the half-baked professional was setting in. But I had a problem — again: the gap was so narrow it looked like a tunnel, more like a funnel tapering towards the other end. The narrow end was weighed down by huge branches.

I could not squeeze through without taking off my backpack, which was fine. But I needed to bend, and the back of my head was brushing against the foliage — a trigger for claustrophobic panic to set in. The impulse is to turn back and run.

But the tunnel was so narrow I could not turn back, which probably saved me. There was no option but to push forward. Suffice to say that while emerging as a nervous, sweaty wreck, I learnt first hand the real meaning of the cliché “light at the end of the tunnel”.

Not without damage. In the panic, I forgot the retrieved boot-camp lesson and stepped into a ditch, drenching my trainers and socks. It did feel comfortable initially because of the steaming environment but it became harder to walk with squishy socks.

But size of the fallen trees was becoming relatively small, except one that blocked the main gates of La Martiniere for Girls. Eventually, I reached Park Street police station.

By now my unfit body was sending me warning signs. I was becoming more breathless, my limbs, especially the hands, were becoming heavier. Should I walk on?

Lesson number three: you are not a showboat, your job is to get the job done with as less damage as possible and using all resources at your disposal.

I could hear some cars coming up behind me. I tried to hitch a ride and failed miserably, partially because I do not know how to strike with elan the universal pose and partly because a sweaty, bald and unshaven middle-aged man is not an inviting proposition even in normal times.

Then came the Swiss knife of armchair explorers: the yellow cab. The very first one mercifully agreed to ferry me but the cabbie said he could not go beyond Esplanade, just a stone’s throw from my destination.

If you are reading this, it means my mission had been successful and I could play a role in bringing out this newspaper tonight.

The urge to refer to the plight of the walking migrants is irresistible. But to even mention, let alone compare, my possibly irresponsible trek and the migrants’ gruelling journey to further misery in the same breath would amount to dishonouring the lessons I learnt — and re-learnt — this Thursday afternoon.