Debris all around, monsoon to add to citizen woes 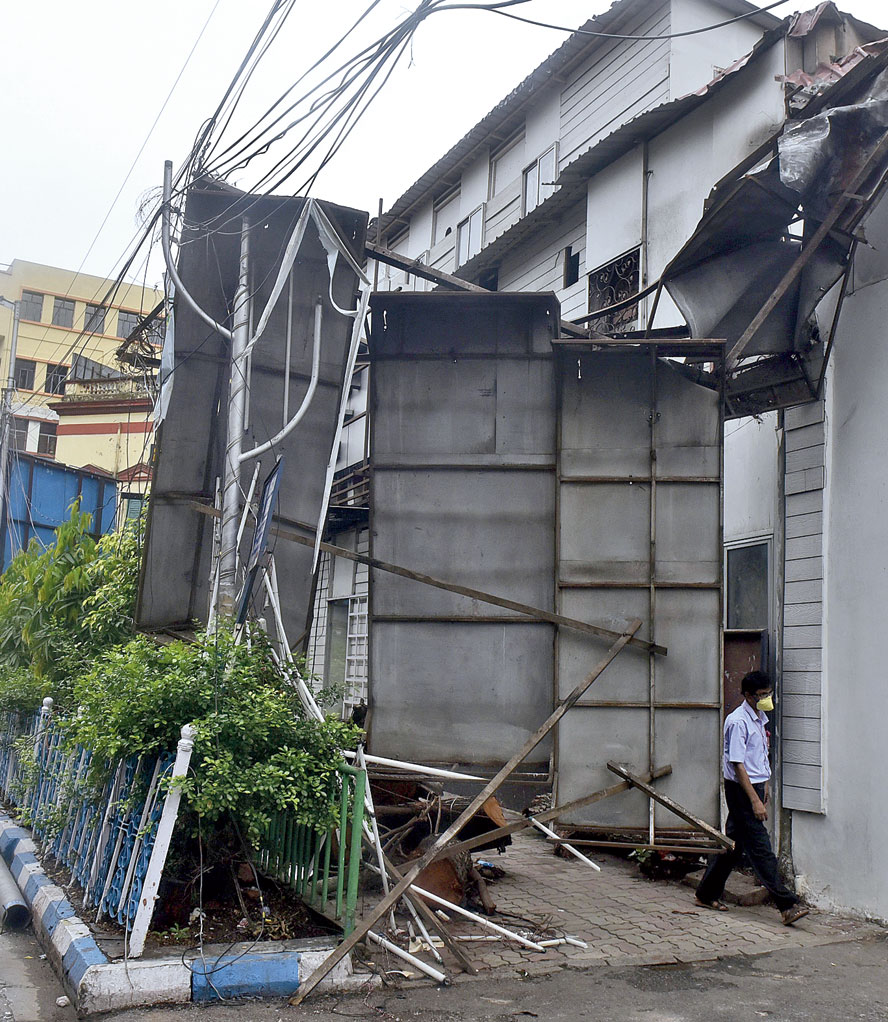 Half-broken street lights, inclined trees and collapsed billboards — tell-tale signs of the devastation caused by Cyclone Amphan — still lean on the city and the monsoon is likely to compound the threat they pose to commuters and others.

The Telegraph spotted many such hazards across Calcutta.

An overturned billboard has blocked the footpath in front of Apeejay House on Park Street. The sharp, rusted edges of the twisted frame protrude outside towards the road.

Pedestrians are forced to walk down the carriageway to avoid getting hurt while trying to squeeze through small gaps on the footpath on that stretch.

Damaged signage along Central Avenue leans on a tree on Saturday

Broken and tattered billboards were spotted in the Gariahat and Girish Park areas and near The BSS School on Amir Ali Avenue. Architect Abin Chaudhuri said such billboards could collapse under the impact of rough winds accompanying rain during the monsoon.

A tree whose roots were partially uprooted stand at a 45 degree angle in front of the Calcutta Medical College and Hospital. A lamp post stands dangerously inclined on BB Chatterjee Road in Kasba.

Similar sights were spotted on the streets of Salt Lake, Baguiati and Kestopur.

To make matters worse, several roads in Salt Lake — including Broadway, which connects the township with EM Bypass — plunge into darkness after dusk as most street lights have not been working since Amphan. Quite a few broke when the storm was blowing through the city.

On Friday, a resident of HB Block in Salt Lake fell off his scooty after he suddenly slammed the brakes to avoid crashing into a broken lamp post near BD Block in the township.

“The rusted end of the pole stuck out like a spear and was at the same level as my head. I spotted it at the last minute and my scooty skidded off the road, but thankfully I did not hit my head against the pole,” said Rishi Kundu.

Cyclone Amphan blew off the flex of a billboard on Chowringhee Road, exposing the tubelights. The picture was taken on Saturday

Residents said broken poles could be spotted in all three sectors of the township. A streetlight hangs precariously over the main road that connects EE Block to GD Block and broken signal poles lie on the roads near the Eastern Zonal Cultural Centre on Broadway.

On VIP Road, too, broken poles jut out on the carriageway on stretches along Dakshindari, Lake Town and Kaikhali.

Krishna Chakraborty, the mayor of the Bidhannagar Municipal Corporation, said she would look into the issue. “We are still facing an uphill task removing the trees. Nobody has complained about the poles yet but we will send our assessment teams,” said Chakraborty.

A Calcutta Municipal Corporation official said they had removed most of the broken and inclined posts.

“If there are any dangerously hanging electric poles, please lodge a complaint with us. There could be one or two instances of oversight. We have removed most of the dangerously inclined poles,” said the official.

Naturalist Arjan Basu Roy said the CMC should quickly identify the trees that were partially uprooted and either try to restore them or cut them. “Such trees could topple during heavy rain,” he said.