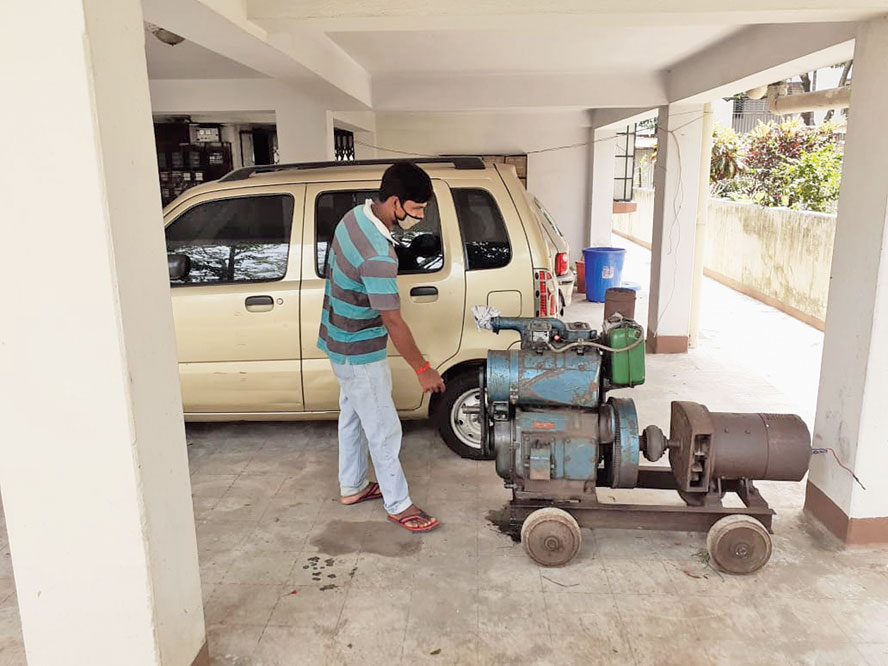 The cyclone, it appears, has been a blessing in disguise for generator suppliers who have done brisk business in Calcutta and neighbouring areas, which were without power till Tuesday night.

Tapas Halder and Gopal Mandal — electricians by profession — who have been without any business during the lockdown now have money. They charged a premium as they rented out their generator sets, enabling houses to use pumps to draw water from reservoirs to overhead tanks.

The rates ranged from Rs 15,00 to Rs 2,000 an hour as desperate residents took such sets to survive the prolonged power cut.

Generator suppliers had been roaming the streets in the Regent Estate area, one of the worst-hit residential complexes in Jadavpur, with generator sets on rickshaws, searching for potential customers, since the cyclone raged across the city on May 20.

There was no dearth of customers, be it in Regent Estate or Netaji Nagar near Ranikuthi, as residents relied on generator sets in the absence of quick response from CESC, the power utility company.

Tapas Hader, 28, who stays in Vidya Sagar colony in Jadavpur, visited Regent Estate on May 21, the day after the cyclone had struck, on his first assignment to provide a set to a building. As news spread in the neighbourhood, soon others wanted to hire his set (12KV capacity).

He said he had provided the set to at least 27 houses in the past six days. “In some households, I have charged Rs 2,000 an hour. In some, the rate was settled at Rs 1,500.... I have managed to overcome the slump because of the lockdown.”

People like Halder and Mandal have lost electrical assignments at homes because people are wary of potential health hazard.

Halder, who had switched to selling fish, landed with his 10-year-old generator set as residents needed a backup, mainly to run water pumps.

Some households ran the generator for an hour.

Shibaji Bhowmik, a resident of Regent Estate said, the duration depended on the size of the reservoir. A reservoir with a 4,000-litre capacity will need the set to run for an hour, he said.

Some buildings with 18 flats have reservoirs that can store up to 6,000 litres of water.

“In such buildings, the generator had to run for more than an hour. They charged us a premium. But we did not have a choice,” Bhowmik, who is also the president of Regent Estate Association, said.

“The earnings in these past few days have helped me clear my dues,” Halder said.