Pitfalls of sweeping under carpet

Foliage, twigs on the roadside, need to de-clog drains 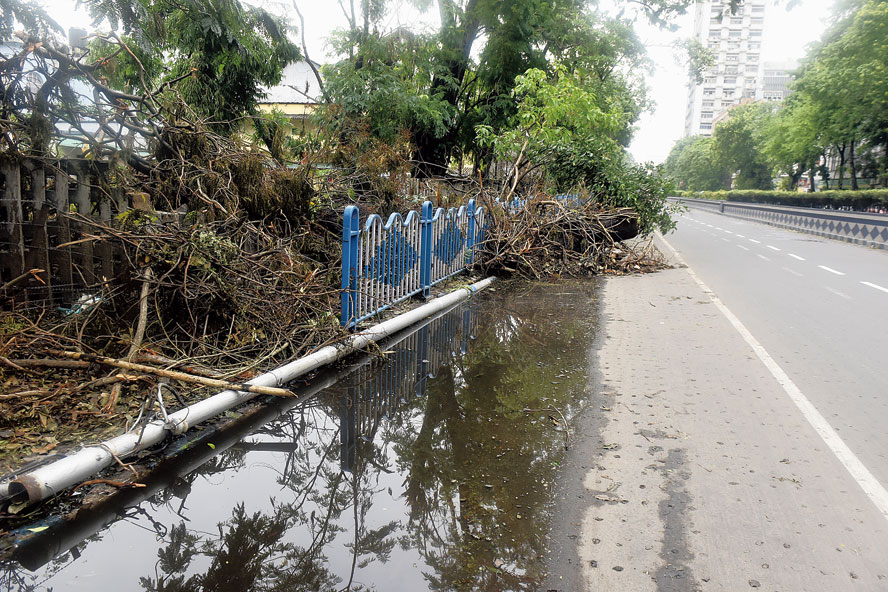 Most of the foliage and twigs from trees uprooted by Cyclone Amphan have been swept to the roadside over the past week to clear the thoroughfares, raising the risk of waterlogging during the approaching rainy season unless swift action is taken.

The debris has blocked the lids of catch pits through which rainwater flows into the drainage network underground.

Many leaves and twigs have slipped through the catch pits and reached the underground sump, partially blocking the free flow of rainwater into the sewer lines that run till the drainage pumping stations, said engineers acquainted with the city’s underground drainage network.

Some roads were waterlogged on Thursday morning as the fallen trees and leaves were lying on the roadside, blocking the catch pits. The stretch of Chowringhee Road in front of Bishop House was one such road. Pedestrians walked carefully and vehicles slowed down near the stretch.

In one place, the branches of a fallen tree were heaped on the roadside in such a way that the catch pits could not be seen and they blocked the free flow of water into the pits.

An architect acquainted with the drainage network of Calcutta said: “A collection of many leaves and twigs is thick enough to block the lid of the catch pit.”

According to an estimate, over 5,000 trees have been uprooted or their branches broken during the cyclone on May 20. Several more came down after a 96kmph gust struck the city exactly a week later on the evening of May 27.

In most affected places, the agencies working to declog the roads chopped the trees and branches into smaller pieces and pushed them to the roadside. In a way, they shifted the problem from the road to the roadside.

Although several agencies like the army, the National Disaster Response Force, firemen from Odisha, forest department personnel and several others cut the fallen trees, the onus of clearing the chopped remains has fallen on the CMC.

In the past couple of days, the chopped-off remains have been removed from only a handful of roads like Harish Mukherjee Road. The CMC has hired equipment like payloaders, cranes and dumper trucks to speed up the removal. “But it will take several days to remove all of it,” a CMC official said. 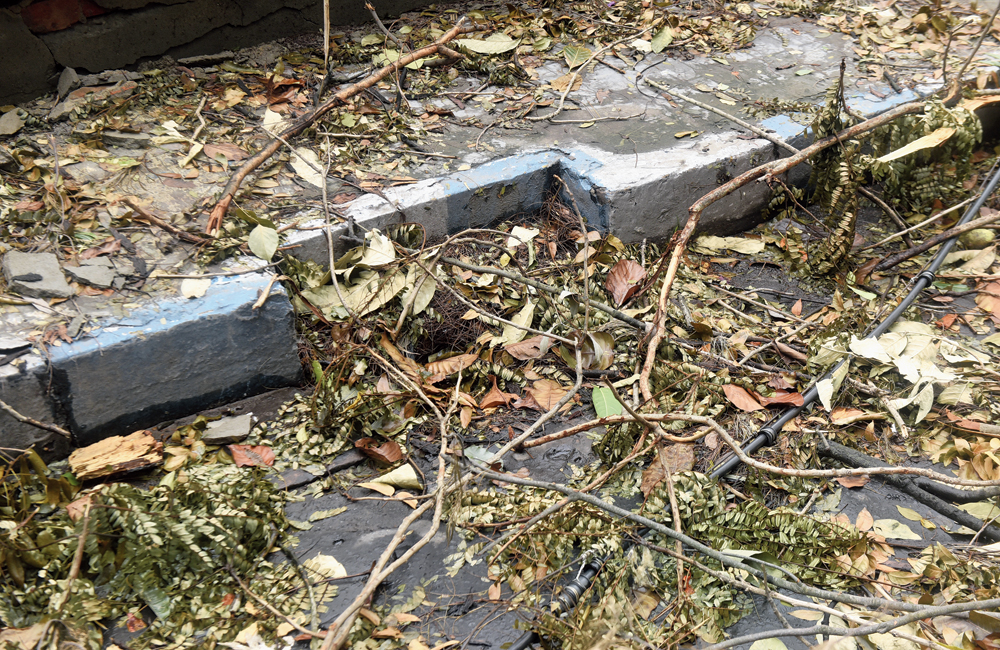 Foliage and twigs of trees felled by Cyclone Amphan choke a kerbside catch pit in Southern Avenue on Thursday. It is through these pits that water from the city’s roads gets channelled into the underground drainage system. With more rain forecast and the monsoon approaching, the pits need to be unclogged swiftly to avert water-logging.
Picture by Bishwarup Dutta

In the drainage system, there is a sump below the lid that is visible on the kerb. It has an outlet pipe that connects the sump with the main drainage line under the road. “If the sump is 5ft deep, then the outlet line is fitted 2ft above it,” a CMC engineer said.

The objective is to ensure that particles like dust and sand that enter the sump will settle below while the water that is 2ft or 3ft above the bed of the sump will flow out through the outlet. If too many leaves and twigs fall into the sump, they may partially block the outlet channel and hinder the flow of water from the sump.

“If the flow from the sump through the outlet channel is partially blocked, water from the road above will take more time to be drained out,” said an architect.

A CMC engineer said that pre-monsoon preparations of the civic body included cleaning sumps below the lid of the catch pits. The silt deposited in the sumps is cleaned so that the free flow of water remains unhindered.

The civic body also cleans the main drainage pipes by uncovering the manhole lids. These help desilt the drainage lines.

“We are desilting the catch pit sumps and the main drainage lines but obviously because of the manpower shortage (arising from the lockdown) the work has been hit,” said a CMC engineer.

Many civic personnel had returned home when the lockdown began and several workers who are employed by contractors have left the city. “Till all these people return, the work cannot start at full steam,” said the engineer.

With only a few days left for the monsoon to hit the Kerala coast, the CMC has little time to clean all the catch pit sumps and desilt the drainage lines. The usual onset date for Kerala is June 1. The normal date for the arrival of the monsoon in Calcutta is June 8.