Advertisement
Home / West-bengal / Calcutta / Hijack, just like it was in football season 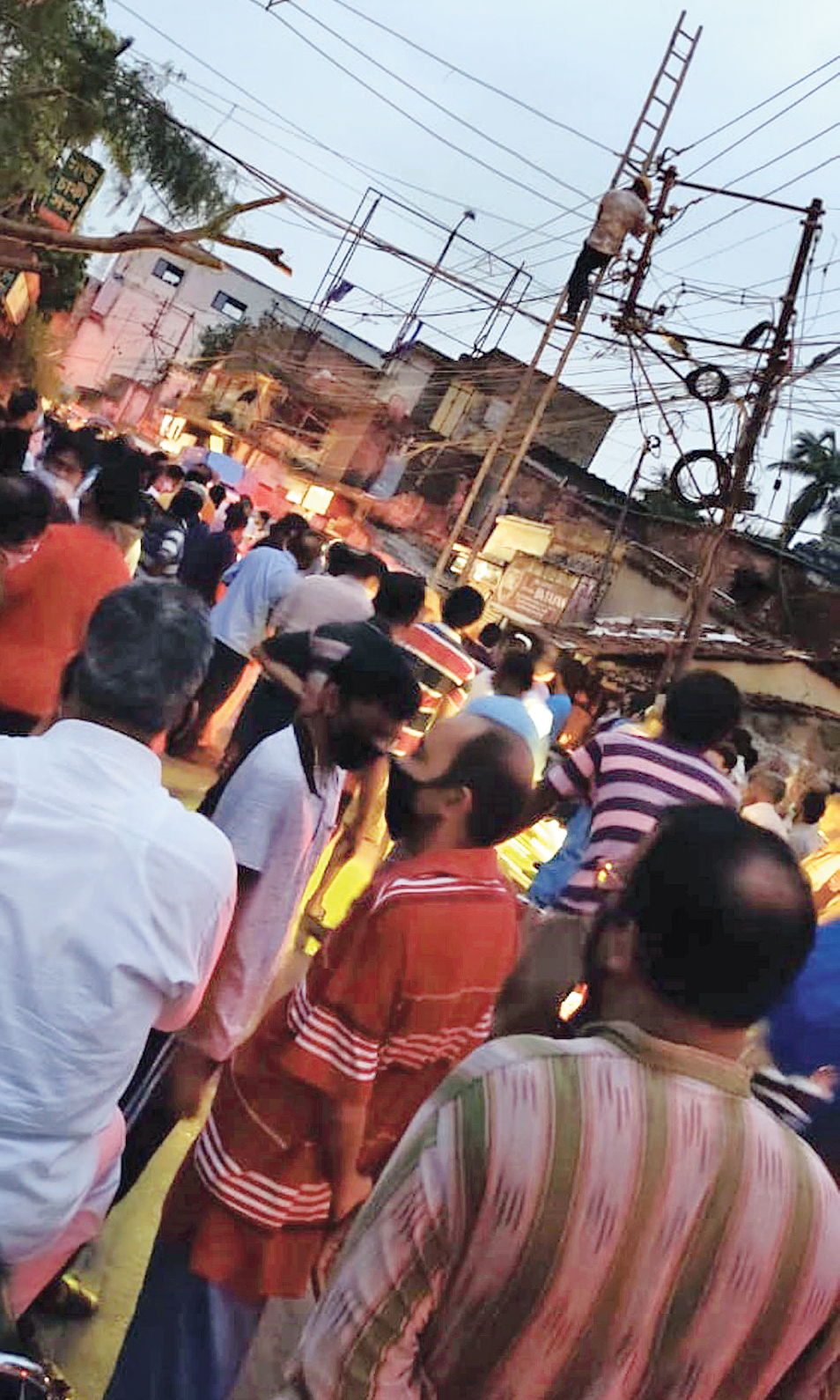 This is what it took for power to be restored in a Behala neighbourhood — and accounts from different parts of Calcutta suggest it was not an isolated incident.

The Behala pocket, with most homes without power since Wednesday and some since Thursday, had its supply restored on Sunday evening after a group of residents hijacked a CESC team, shielded it from rival groups and stood guard as long as the linesmen were on the job.

The residents of Wards 125, 126, 127 and 128 had blocked Biren Roy Road (West), a busy street connecting Diamond Harbour Road with areas like Bakultala, Sarsuna and Shakuntala Park, for hours on Saturday and Sunday.

Apart from a sizeable presence of women, the group had several middle-aged men and a few elderly ones.

The group that hijacked the CESC team on Sunday morning included at least two women.

The operation reminded one of the group members — a 50-year-old football and East Bengal fan — of an equally surcharged hijacking in 1993, when the red-and-gold brigade had snatched a player from under Mohun Bagan’s nose during the transfer season.

The football fan was part of the group that waited for Steel Express — the player was coming from Jamshedpur — in Howrah and managed to sneak him past the Mohun Bagan men who were also vying for him.

Cut to 2020. A team from the CESC had turned up to repair damaged overhead wires on Biren Roy Road (West) late on Friday night. But a group from another neighbourhood, also without power, arrived at the spot and hijacked the team, a resident of Bakultala said.

“They easily outnumbered us,” said the man, who was in his early 50s. “But the incident put us on our toes.”

Two local clubs sprang into action the next day and at least 50 people started blocking the road. Some “informers” were deputed at nearby areas to keep track of CESC teams.

As soon as a tip-off came on Sunday about a power restoration team working in Sakherbazar, around a kilometre from Behala Chowrasta, a group of “around 15 men and two women” rushed to the spot.

“When we reached the spot around 11.30am, the CESC team had almost completed its work there,” said a resident of Basudevpur Main Road, part of the squad.

But a group from another neighbourhood was waiting to take the CESC team away.

Things got “charged up” and members of the rival groups, some of them friends for years, were eyeball to eyeball for a while before a compromise was reached.

“We reached a solution. It was decided that the CESC team would first come to Biren Roy Road (West) and fix the supply. A small team from Sanjib Palli would wait there and, once the job was done, lead the personnel to their locality,” said another resident.

Deal done, the team came to work around 1pm. The group members took turns standing guard. The CESC workers were treated to a lunch of rice, dal, vegetables and fish cooked from a local eatery.

Power was restored a little after 7pm.

Another group from another locality arrived at the scene to take the workers away. This time, the local group sided with the residents of Sanjib Palli. Another deal was struck. The CESC team would first go to Sanjib Palli, as originally decided, and then to the third location.

On the eastern fringes of Calcutta, residents of a neighbourhood who had been without power for five days paid for “food and refreshments” for a team of workers who restored some of the connections.

The local police station had cobbled the team together — with CESC workers drafted from other teams and six men from another agency — residents said.

A team of four policemen from the local station accompanied the workers, possibly to thwart attempted kidnappings by other groups.

When power returned to some of the homes on Monday afternoon, they were told this was a “temporary connection” and they had better not switch on ACs or geysers.

A group of residents collected cash contributions of Rs 300 each from over 40 houses from three lanes in the block, which has over 150 houses.

“Roder modhye sakal theke khatchhe. Oder jonno ektu khabarer byabastha korbo (They have been toiling in the sun since morning. We’ll arrange food for them),” a civil contractor who was raising the funds told a family, a resident said.

Among the fundraisers were some who usually kept to themselves. “The common plight brought everyone together,” said a woman.

“We had been badgering the officer in charge of the local police station for three days. He was extremely helpful,” said a resident who owns a garments store.

The residents had resorted to a road blockade and multiple visits to a nearby CESC office, besides pleading with the cops. “A mobile van that the CESC office sent got hijacked by another group on Saturday,” said a resident.

The team began working on Monday morning. A crowd gathered at the spot. People flocked to balconies and windows to watch the workers.

In the evening, the group that had collected the money began knocking on the donors’ doors again — this time to return a part of the money. At least three families said they got back Rs 202 each.

“We organised lunch, soft drinks and two rounds of tea. It took Rs 98 per house,” the contractor is said to have told the families. The team of cops on vigil were also provided with food and refreshments.

The officer in charge of the police station, asked about his role in the restoration of power, tweeted: “Stitching (the team) done by CESC and restoration is the all-out effort of minister Aroop Biswas, local councillor and our department.”

A CESC spokesperson said he “had no knowledge of the utility’s workers being provided with food”. But sources in the utility said it was “good to see” that the workers were being appreciated. “They have been toiling for 16 to 20 hours a day. Some appreciation is due,” said one of the sources.