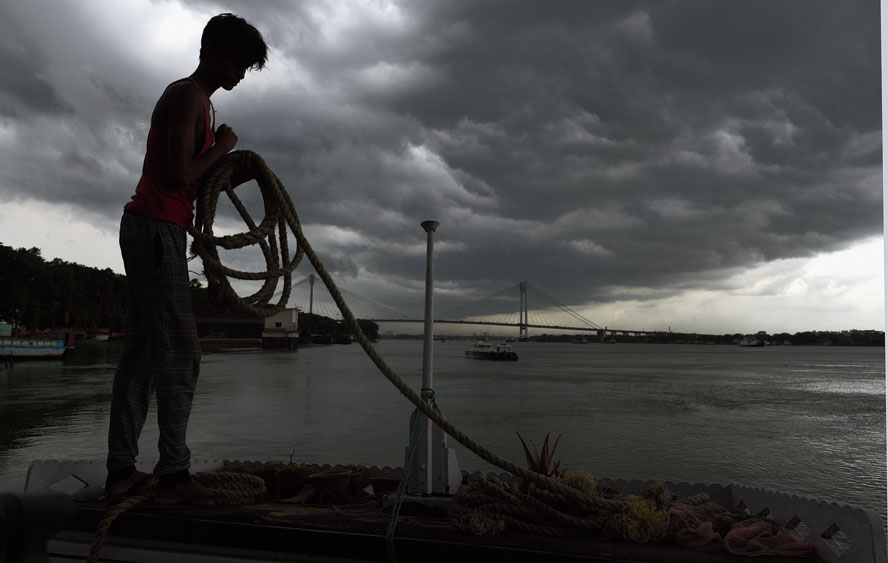 Bracing for the storm: A boy tethers a launch to the eastern bank of the Hooghly in Babughat, with dark clouds looming overhead, around 2.30pm on Tuesday.
Picture by Pradip Sanyal
Snehal Sengupta   |   Calcutta   |   Published 19.05.20, 11:26 PM

Residents of highrises have been advised to keep their windows shut and jam their rails using cloth pieces or erasers so they do not slide open when hit by gusty winds to be brought by Cyclone Amphan.

Residents have also been advised against using elevators and to keep their cars parked with the handbrake on and slotted into a gear, so all the wheels are locked.

Advisories issued by police and urban local bodies list a slew of safety measures that include removal of all potted plants from window ledges, terraces and balconies so that nothing flies off and becomes a missile that can inflict severe damage.

The New Town Kolkata Development Authority has urged residents of highrises to keep their elevators parked on the top floor.

“That will minimise damage to the elevator equipment as well as the building,” said an NKDA engineer.

The police have advised residents to stock fuel for back-up generator sets, keep saws and cutters handy so that they can be easily accessed if a tree gets uprooted inside the complex and not to touch any dangling wires.

The NKDA has also asked residents of highrises to remove all items from shelves that are at a height and can fall.

“Oscillation during a storm is necessary as the movement helps transfer load from top to bottom and prevent damage to the structure. The movement doesn’t cause discomfort but can dislodge items on shelves kept at a height,” said an engineer of the New Town authority.

Architect Abin Chaudhuri said a storm affects upper floors more than the ones closer to the ground.

“At a higher level, there is more open space and winds blow with greater force. At the ground level, the force reduces because the wind gets obstructed. It is very important to ensure that there is no gap in the windows as the high winds can cause them to shatter,” Chaudhuri said.

The Met has said winds clocking over 100kmph are likely to blow across Calcutta after Amphan makes landfall between Wednesday afternoon and evening.

In Urbana, a housing complex where some towers have 40 floors and some 45, residents have formed a disaster management committee and set up a standard operating procedure to tackle Amphan.

“Our gas connections will be turned off and if need be, the power supply will be turned off, too. Our generator sets are on standby,” said a resident who lives on the 33rd floor of the housing complex, around 700m from the Ruby intersection.

At South City on Prince Anwar Shah Road, which has 35 floors, residents have been asked to remove flower pots from common areas and keep their mobile phones charged, torches handy and doors and windows closed.

At Rosedale Garden, near Karigori Bhavan in New Town, where each tower has 25 floors, residents have been asked not to touch any electric poles and wires.

“Residents have been asked to safely stow away anything that can become a projectile during the cyclone,” said a member of the residents’ association.

A senior police officer said the residents have been advised to call 100 in case of any emergency.