A walk through Rabindra Sarobar banks reveals picture of neglect 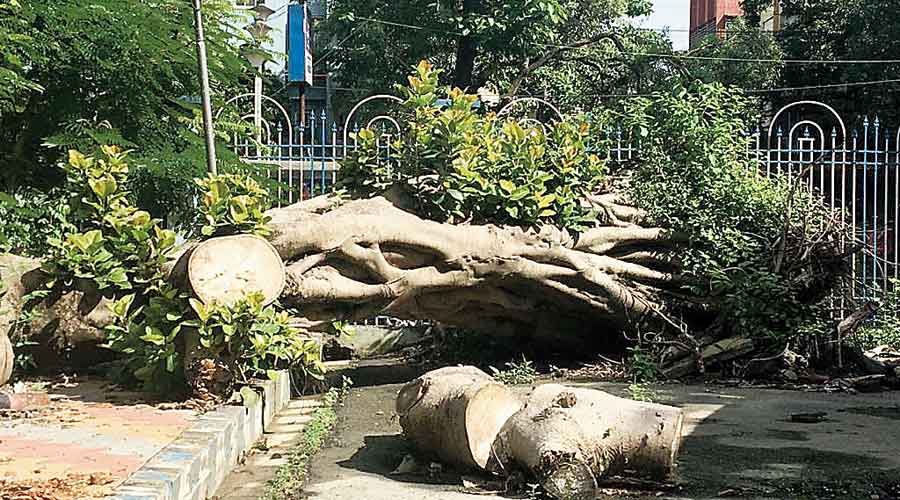 A disaster was averted after the National Green Tribunal (NGT)’s on Thursday dismissed the Calcutta Metropolitan Development Authority (CMDA)’s appeal to allow Chhath rituals in the Rabindra Sarobar premises. But a visit to the lake grounds, the only open, green space in south Calcutta and beloved of morning-walkers, reveals the ongoing disaster.

Besides, say environmentalists, Rabindra Sarobar, or the Dhakuria Lakes, have been plagued by many troubles that have been consistently ignored by the authorities. The fact that the CMDA now wants Chhath puja performed at the lakes — the CMDA plans to move the Supreme Court to pursue with the appeal — is the culmination of long years of neglect of the lakes and a systemic undermining of the natural environment of the city.

One obvious sign is the appearance of the lakes now. Almost four months have passed since Cyclone Amphan struck, but the signs of devastation are everywhere.

The main pathways have been cleared. But every few feet you encounter exposed trunks of trees, their tops sawn off by the winds, clumps of dead branches heaped over rubble and entire segments of metal fencing either missing or lying mangled. Near the Nazrul Mancha entrance, huge tree trunks, remnants of trees felled by the cyclone, form a barricade. On one side of the stadium, a life-size showpiece horse lies on its side, at an upper level.

As one walks from Nazrul Mancha towards the Safari Park entrance, a line-up of tall, ghostly trees stand, hit in the middle, their top halves fallen to the ground but still attached to the trunks. The right side of the path is overgrown with weeds. A smaller water body near the Safari Park entrance looks like it has not been cleaned for months.

The grounds are open now from 5.30am to 9.30am, but they are changed vastly. Visitors are fewer in number. “I tried to start going again,” says Kunal Banerjee, a Lake Road resident and a morning-walker. “But the lakes look so dismal now that I can’t bear to go there anymore.”

During lockdown, when the city really needed open space, the condition of the lakes affects the city more. If the wetlands are the city’s kidneys, Rabindra Sarobar — created by the CIT scheme, which acquired the 190 acres in the 1920s — can be called Calcutta’s lungs.

The city has less than 6 per cent open space against an international benchmark of at least 15 per cent; and Rabindra Sarobar, along with Subhash Sarobar and the Maidan, constitutes the bulk of it within the city.

That Rabindra Sarobar can be left to rot like this is the result of a deep indifference towards environment that the authorities have been showing of late, says environmentalist Naba Dutta, secretary, Sabuj Mancha, who has written a letter to the chief minister highlighting how holding the Chhath puja at the lakes will pollute the waters and affect the biodiversity of the place.

This indifference towards environment, coupled with “vote politics“ in the run-up to the Assembly elections led the CMDA, a state government body that is the custodian of Rabindra Sarobar, to appeal for the Chhath puja at the lakes.

The CMDA has been even more neglectful towards Subhash Sarobar. “At least Rabindra Sarobar is in south Calcutta and powerful people are on its side,” says Naba Dutta. Subhas Sarobar is even less protected.

“And what makes the authorities think that all those in the city who perform Chhath puja want to do it at the expense of environmental concerns? This is stereotyping and undermining the Bihari community,” says Naba Dutta.

Tolerance of unethical business practices has also made the authorities ignore another severe problem at the lakes: the effluents from the clubs around, which go straight into the lakes. “For years, we have been highlighting this problem, but the authorities have done nothing,” says environment activist Subhas Datta.

“It’s a fact that, from time to time, we have found various clubs releasing toxic effluents in lake water,” a former state pollution control board official said.

The one thing that the authorities have done consistently about the lakes is being inconsistent, depending on the priority of the moment.

On November 15, 2017, NGT issued a set of directives on the lakes, which included a blanket ban on observing Chhath puja there.

The directives were based on recommendations of an expert committee formed by the tribunal, following petitions, including one from Subhas Datta,  on activities that were affecting the lake environment.

The committee also pointed at the polluting role of the effluents from the clubs.

The directives banned performance of any puja, community picnic and organisation of social events in and around Rabindra Sarobar; and new construction or extension of any existing building without the permission of the tribunal. The CMDA was to introduce nominal entry fees and frame guidelines for operation of the clubs, which clubs not to have direct access to the lake area.

“While the CMDA has informed that it will not charge entry fees, the rest of the directives have been violated in varying degrees, the most blatant being the observance of Chhath puja twice after the order,” says S.M. Ghosh, environmentalist and regular morning walker, who is also concerned about the heavy pollution created by the club effluents.

In September 27, 2019, just before the Chhath puja, the NGT warned that “permitting performance of the puja in the Rabindra Sarobar lake will be considered as violation of the directions passed … which shall call for punitive action...”, after the very CMDA had approached the body, expressing fears about the lake premises.

The order was completely violated yet again and thousands performed Chhath within Rabindra Sarobar, which, activists claim, could only happen only with the tacit support of politicians and administration.

Subhas Datta points at the role the opposition parties in the state are not playing and alleges a conspiracy of silence in matters of religion. “It seems that a political mahajot has been formed against environment,” the activist feels.