Cyclists back on roads following suspension of suburban train services 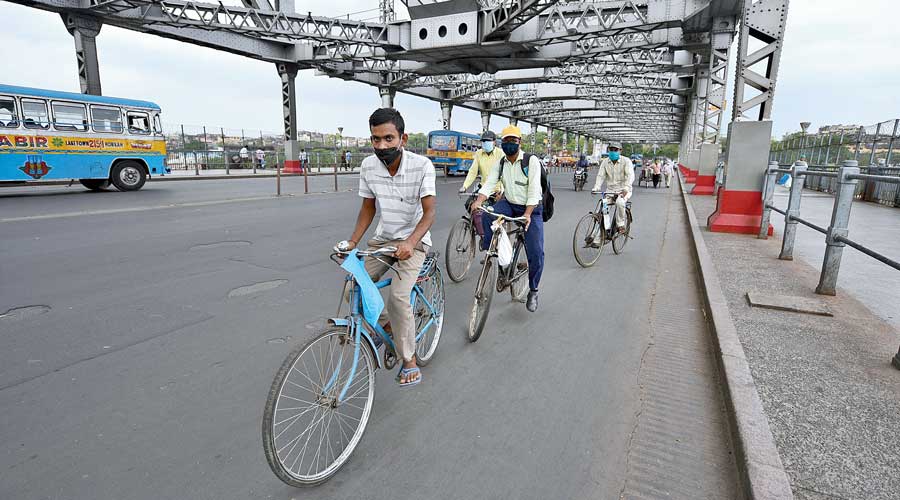 Cyclists are back on roads following the suspension of suburban train services and reduction in the number of buses from Thursday.

VIP Road, EM Bypass, AJC Bose Road, BT Road, Central Avenue and several other thoroughfares witnessed a large number of cyclists on Friday. Some of them pedalled 30km or more to reach their workplace and back home.

The pockets of the city where the cyclists were seen included Dalhousie, Lalbazar, Bowbazar, Burrabazar and Posta.

Avijit Ghosh from Agarpara, on the northern fringes, had pulled out his bicycle on Thursday after the suburban train services were suspended.

On Friday, he cycled to Lalbazar covering a distance of around 16km through BT Road to reach his office, a small firm that deals with registration of land and properties.

Ghosh left his office around 4.30pm, around two hours before he would usually head home. His boss did not object.

“It took me around an hour and a half to reach the office. Roads were mostly empty and I felt safe not having to share space with others while coming to office,” he said.

Senior police officers across traffic guards said while most of the cyclists were headed for parts of the central business district, a significant number pedalled to Rajarhat and New Town from EM Bypass, taking a shorter route through Basanti Highway.

A smaller number of them from Behala, Jadavpur and Dhakuria wereeaded for industrial units around Taratala and Budge Budge.

“I dropped my wife (who works as an nursing assistant at a nursing home) on the Rashbehari connector on my bicycle and then took the main thoroughfares down the Park Circus seven-point crossing and AJC Bose Road to reach Bowbazar,” said Debasish Sinha, a Kasba resident.

He works at a shop selling glass frames and sunglasses. “Police have been cooperative,” he said.

Till Wednesday, Sinha would take a train from Ballygunge to reach Sealdah and then walk down to Bowbazar.

In June 2020, following a nod from the state cabinet, city police had issued a notification allowing cycles on small and medium roads in Calcutta to ease the hardship that people were facing in the absence of suburban and Metro trains.

The order was later withdrawn after train services resumed in November. And the police re-imposed restrictions on 62 thoroughfares across the city prohibiting cyclists.

On Friday, senior officers overseeing traffic movement in Lalbazar said they were yet to draw up any specific order on cyclists. But a word has been put across 25 traffic guards across the city to “go soft” on those pedalling down to the office.

“We have been telling bicyclists not to violate traffic signals and almost all of them are very obedient,” said an officer of headquarter traffic guard.