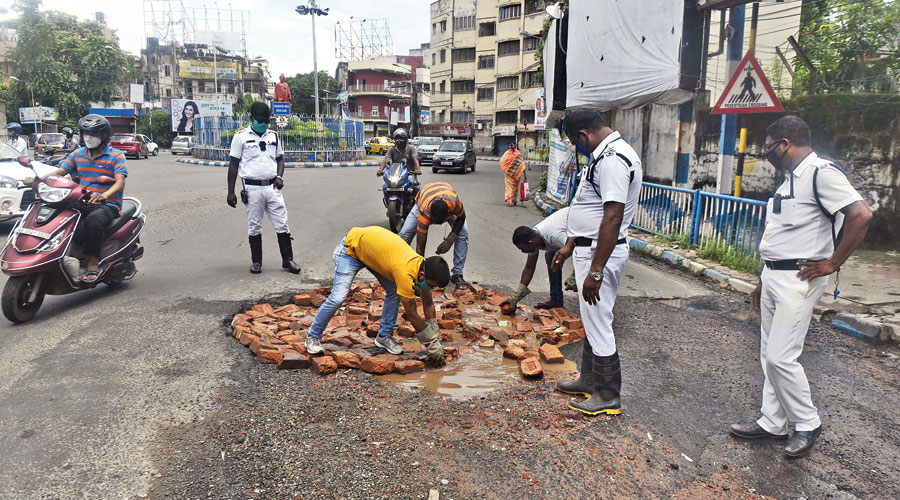 The Covid-19 pandemic, apparently, has hit the city’s roads, too.

Engineers of several state government agencies are blaming the battered state of so many roads in Calcutta on the lack of repairs ahead of the monsoon because of curbs imposed to slow down the spread of the novel coronavirus.

Every year, roads in the city are repaired twice — before the monsoon and again before Durga Puja. This year, the pre-monsoon repairs could not be taken up in most places as the country was in lockdown in April and May, the crucial period for repairs, said engineers from the public works department (PWD), Calcutta Municipal Corporation (CMC) and Calcutta Metropolitan Development Authority (CMDA). 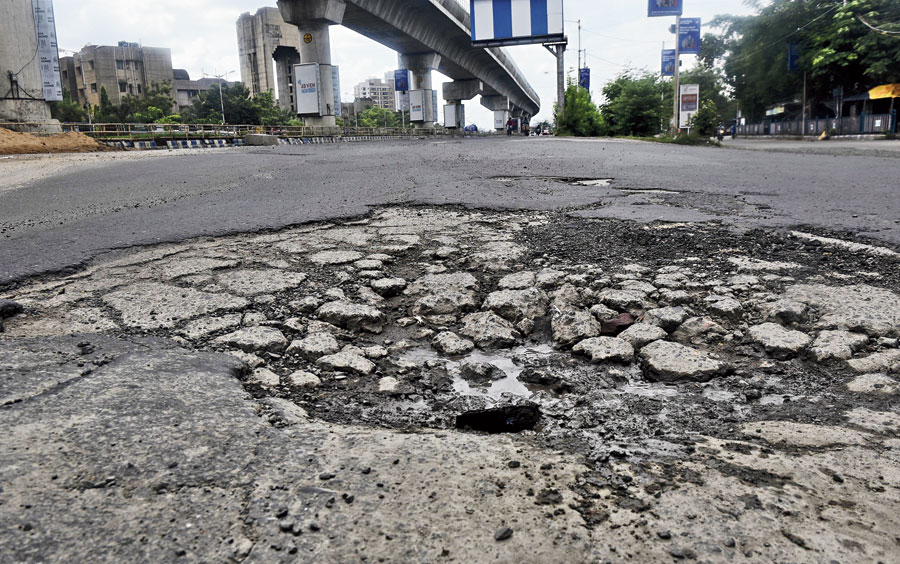 These three agencies are custodians of most roads of Calcutta.

Even after the “complete lockdown” was lifted, getting skilled hands proved to be a challenge, a hurdle the agencies are yet to overcome. On top of that, the government is having a tough time arranging for funds for repairs because of a sharp drop in revenues following the pandemic, a CMDA official said. 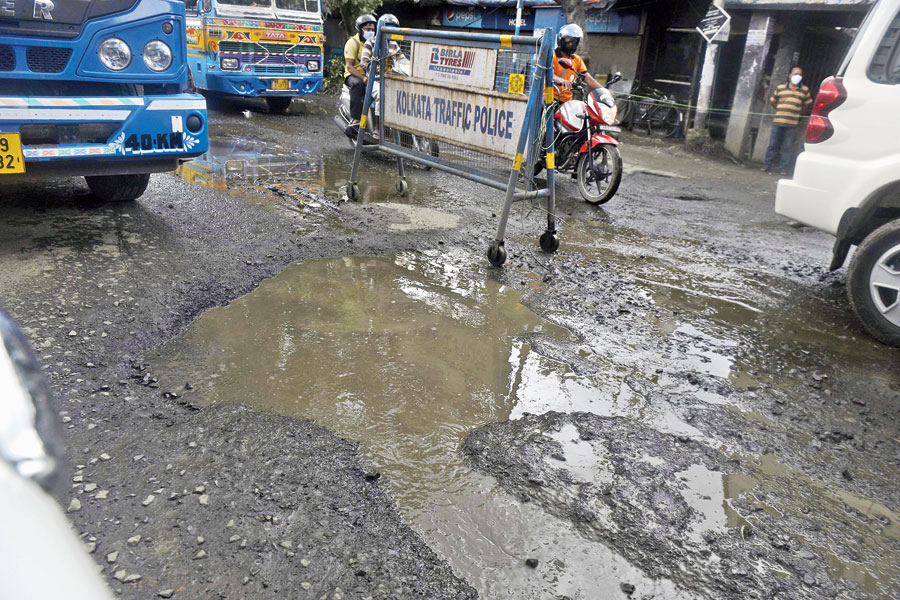 “We have to now answer a much longer list of questions, compared with the pre-Covid times, before funds are sanctioned,” the official said.

“The situation this year is quite bad. All agencies repair broken roads during summer. Still the road surface wears out during the monsoon. This year there was no repair. So, imagine how bad the condition will be,” said an engineer of the CMC.

The result is evident for commuters. A resident of Gariahat had last week experienced a bone-rattling ride down Garia Main Road, which he said was riddled with potholes and giant craters. 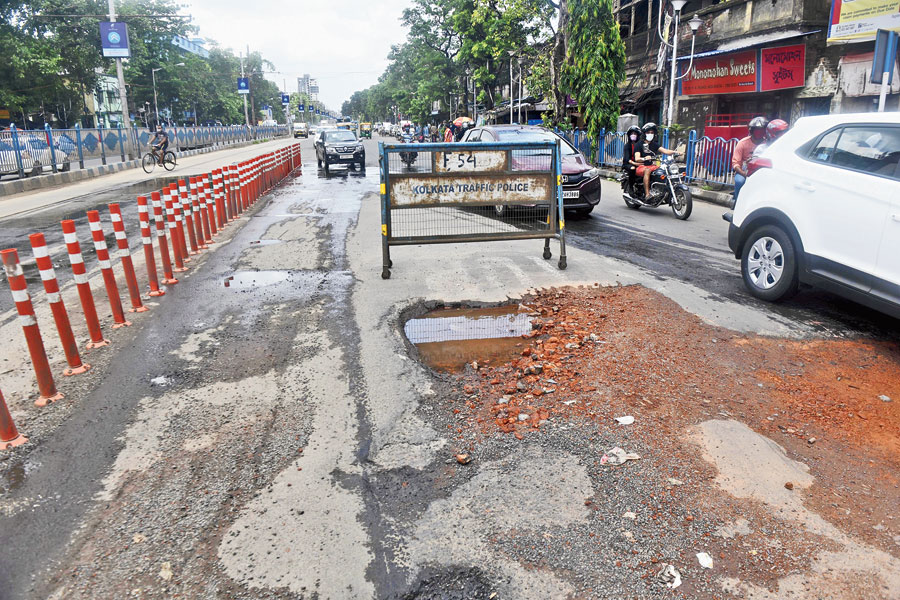 Multiple stretches of EM Bypass are in a sorry state, too. The stretch near the Ruby crossing is particularly bad, said a regular commuter. A 150-metre stretch leading to the crossing on the Ruby-bound flank of the Bypass has multiple craters and potholes.

Puddles have formed on the undulating road here and there, making it more difficult for motorists to gauge the depth of a pothole. “I was about to fall off my two-wheeler when it hit a deep pothole while I was returning from office on Monday evening,” said Chandan Banerjee, a resident of New Garia. 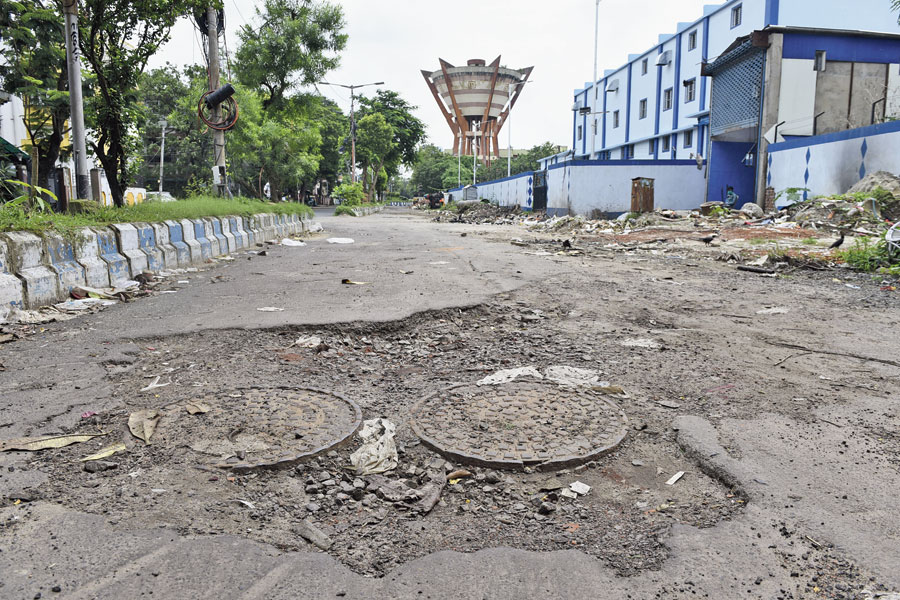 Metro spotted cops filling a pothole with crushed bricks at the New Alipore rotary crossing on Sunday. “Vehicles are skirting the pothole, resulting in long snarls. So we are filling it up,” an officer at the spot said.

The police have also put up a guardrail to steer motorists away from a crater on Deshapran Sashmal Road, near its crossing at Tollygunge Phari.

Several main roads in Salt Lake are also riddled with craters and potholes. The road leading to the Eastern Zonal Cultural Centre complex, on Broadway, from the Tank number 13 bus stop in IA Block is filled with craters, some of which are spread across the width of the flank. 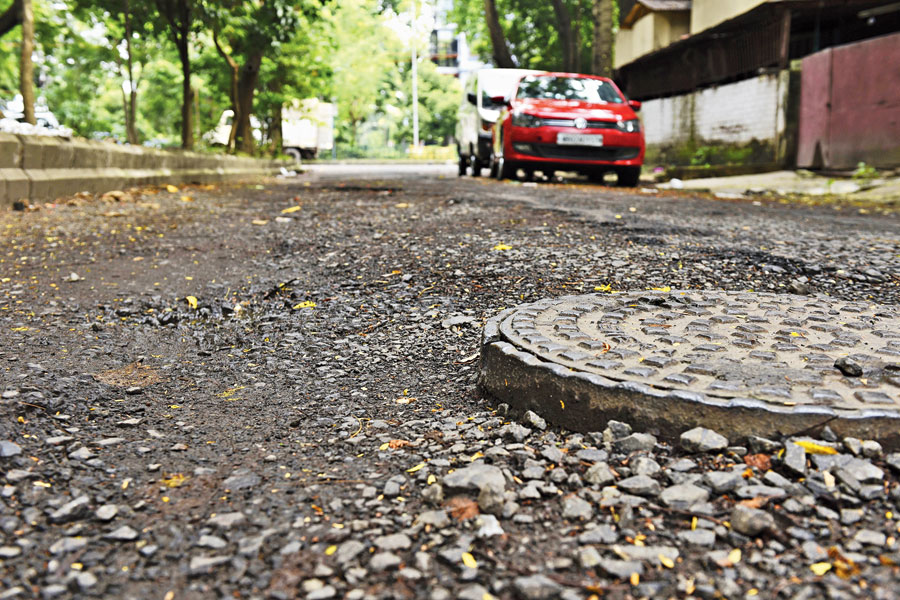 On Tuesday, Metro saw several two-wheelers, cars and autorickshaws switch flanks and drive down the wrong lane to avoid the pothole-ridden stretch. Driving down roads adjacent to the City Centre, near the P&T Housing Complex, that cut through the DC Block, is a nightmare. Namrata Agarwal, a resident of DC Block, said roads in the block had not been repaired over the past six months.

An official of the Bidhannagar Municipal Corporation said they had conducted a survey of the bad roads in the township and would carry out patchwork repairs for the time being.