Covid waste finds its way to yellow bins in Calcutta 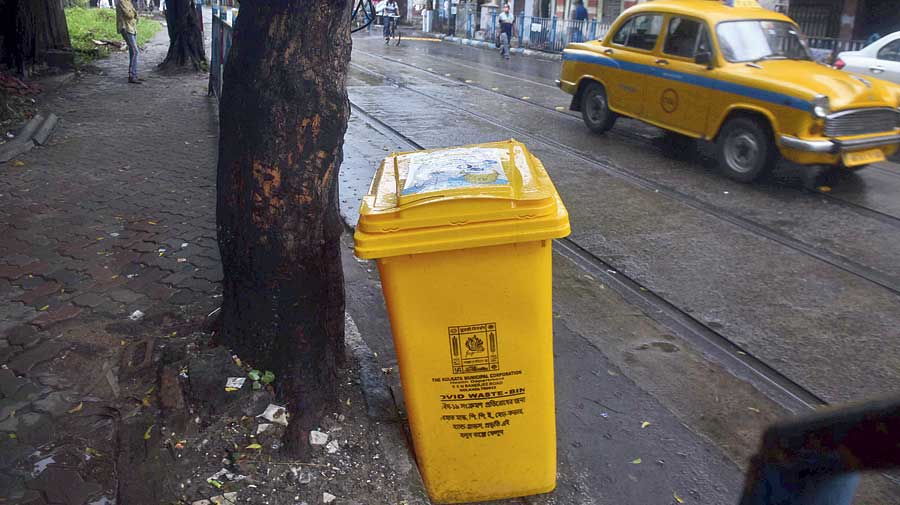 Yellow bins on Calcutta’s roads are now being put to better use. About 70 per cent of the waste in them is Covid or biomedical waste, the agency that cleans the bins on the civic body’s behalf has said.

The bins have labels saying they are meant for Covid waste. Other biomedical waste, too, can also be dumped in the bins, an official of the agency said. Discarded masks, gloves, PPEs, syringes, cottons, sanitary napkins, used medicine strips and bandages can be dumped in these bins.

Metro had on August 22 reported that the bins had been filled with food and kitchen waste and construction and demolition waste, none of which is meant to be dumped in them.

“The Calcutta Municipal Corporation ran awareness campaigns in several places about what to dump in these bins. Besides, media reports helped in making people more aware,” Ramakant Burman, an official of GreenTech Environ, the agency, said.

“We are now getting nearly 70 per cent biomedical waste in the bins. Some people, though, still dump kitchen waste and construction and demolition waste.”

The agency clears the bins once every week. The CMC has installed 200 bins across the city for people to dump Covid waste, Burman said.

After the yellow bins were installed across the city, the collection of waste from Covid positive people in home isolation has gone down, the official of the agency said. “Earlier, we used to collect Covid waste from 200-odd homes every day. Now, we are collecting waste from 50 homes in a day. It seems most people are dumping Covid waste in the yellow bins.”

The agency now receives fewer calls from civic officials asking its officials to collect PPEs lying on the road. “We are collecting plenty of PPEs from the bins. It seems a lot of private practitioners and other people who wear PPEs are dumping them in the bins,” the official said.

Apart from Covid waste, people can dump any biomedical waste in the bins, Burman said. “Any waste that is contaminated with body fluid is considered as biomedical waste.”

The waste collected from the bins is taken to a plant belonging to the agency and burnt. The residual ash is sent to an engineered landfill in Haldia, he said.