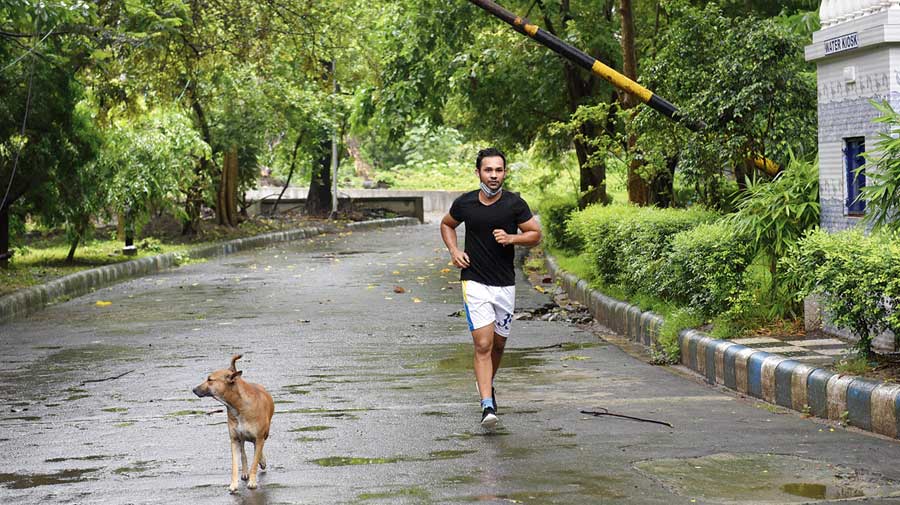 At 7.45am on Wednesday, there was a steady stream of visitors entering Rabindra Sarobar and all of them had to show their vaccination certificates to the guards at the gates.

But this was not the scene across the city as many parks remained unguarded and visitors could go in without anyone to check if they were vaccinated.

Officials managing Rabindra Sarobar tried to enforce the state government’s order that only those who are vaccinated are allowed to enter parks.

A notification issued by the government on Monday mentioned that “parks may remain open for morning walks, physical exercise etc during 6AM to 9AM and only vaccinated people shall be allowed”.

While making the announcement at Nabanna on Monday afternoon, chief secretary H.K. Dwivedi stressed that only those who had taken both doses of a Covid vaccine would be allowed in the parks.

But the government’s notification does not mention that one has to be fully vaccinated.

At the Mother Dairy gate and Buddha Mandir gates of Rabindra Sarobar that Metro visited, guards were seen asking every visitor to produce evidence that they had been vaccinated. Most people showed soft copies of their vaccination certificates downloaded on their mobile phones.

A few carried hard copies of the certificate. If someone failed to download the certificate, guards insisted that they show the text message saying he or she had been inoculated against Covid.

The guards, however, did not check whether the visitors being allowed in were fully or partially vaccinated.

An elderly man who had arrived at the Sarobar without his mobile phone was turned away from the Mother Dairy gate on Southern Avenue.

The CMDA, the custodian of Rabindra Sarobar, had kept open six of the 13 gates on Wednesday. “It would have been difficult to provide an adequate number of guards at the gates had all 13 been opened,” said a CMDA official.

At Deshbandhu Park, managed by the CMC, there was no checking at the gates. Guards were randomly asking visitors whether they had been vaccinated.

Om Prakash Tiwari, from Bagbazar, was there for a walk on Wednesday morning. “I entered the park without any check. After two rounds of walking, a guard asked me whether I had been vaccinated. I told him I had received both doses and could show him the certificate,” Tiwari said.

Officials of the CMC and the CMDA said there were very few visitors on Wednesday, which they felt was because of the downpour overnight and the drizzle in the morning.

“More people will come once the weather improves. We will face the real challenge because queues will form if we are to check the vaccination status of each and every visitor,” said an official of CMDA.

Many visitors to parks asked the guards whether their children who were below 18 could accompany them. Officials of the CMC and the CMDA said they felt there was no bar on children.

“The government order doesn’t say anything about children. Since vaccination of those below 18 has not yet started, the order that only vaccinated persons can enter applies only to adults. We can at best ensure that children always wear masks,” said a CMC official.

Two teams of doctors representing the Bengal chapter of The Association of Physicians of India met the state health secretary, chief medical officer of Hooghly and the police chief of the district on Wednesday demanding action against those who assaulted doctors at Pandua Rural Hospital on June 6 following the death of a patient.

They also demanded more protection for doctors and healthcare workers.