Only two centres are operational and they are also struggling because of the rush of people, who are queuing up from as early as 4am 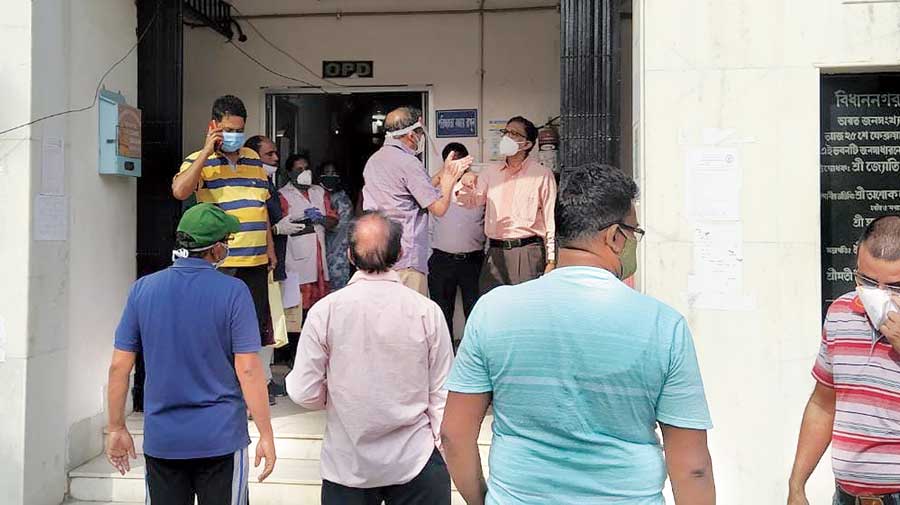 Potential recipients of Covid-19 vaccines ask an official of Matri Sadan Hospital why they would not get the jab on Friday.
Snehal Sengupta
Snehal Sengupta   |   Calcutta   |   Published 24.04.21, 01:57 AM

Hundreds of residents in Salt Lake, New Town, Lake Town, Bangur, Dum Dum and parts of Rajarhat waited for hours on Friday for a dose of Covid-19 vaccine.

Many went back without a jab because the two vaccination centres, run by the Bidhannagar Municipal Corporation in Salt Lake and Narayanpur in Rajarhat, ran out of vaccines.

Metro had reported earlier how the civic body had shut down 10 of its vaccination centres because of erratic supply of Covid-19 vaccines. Only two centres — at the Matri Sadan Hospital in EE Block and at Narayanpur — are operational. But they are also struggling because of the rush of people, who are queuing up from as early as 4am.

Anita Banerjee,83, a resident of Dum Dum, had come to the Matri Sadan Hospital with her son Sanjib, 49, a trader, but had to return home after 4pm without a jab.

The Banerjees had registered themselves on the CoWin portal on Thursday and had selected the 3pm to 4pm time slot. “One of my neighbours, who had got the jab from this centre, advised us to go early because of the rush. However, after waiting for more than 10 hours, they informed us that they had run out of stock,” said Sanjib.

Kuheli Banerjee, 56, a resident of EE Block in Salt Lake, said she had registered her name on the hospital’s register at 4am. She came back to the hospital around 6am.“They started calling out the names from 10am. I finally got the jab at 3pm.”

On Friday, some recipients at the Matri Sadan Hospital got into an argument with the superintendent of the hospital asking him why they did not get the jab even after waiting for hours. “People get irritated after waiting for so long. But we are running short of vaccines,” a hospital official said.

Kusum Adhikary, the chief medical officer of the civic body’s health department, said when the first phase of vaccination was announced they were getting around 200 vials per day for each centre. “The number is down to 35 vials. We are barely managing to administer shots to around 200 people per day at each centre.”

In New Town, too, several people had to be turned away from the two vaccination centres run by the New Town Kolkata Development Authority (NKDA).

An NKDA official said there were instances where more people had turned up than the list of recipients on the CoWin portal. “We had to turn them back.”

Debashis Sen the NKDA chairman said they had an emergency meeting about the situation on Friday. “We decided to vaccinate only those people who have registered themselves on the CoWin portal,” said Sen.