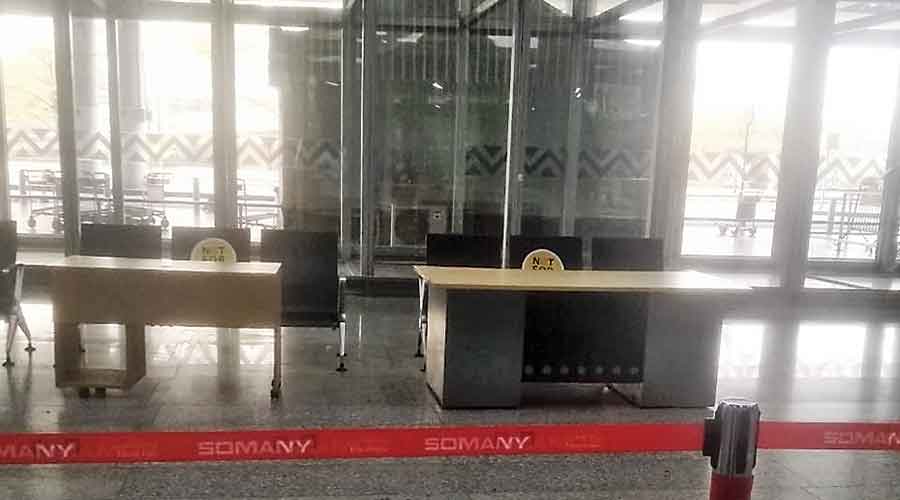 Counters to collect swab samples for Covid tests being set up at the Calcutta airport on Monday afternoon
The Telegraph picture
Sanjay Mandal   |   Calcutta   |   Published 23.02.21, 01:40 AM

Passengers from the UK, Europe, South Africa, Brazil and the West Asian countries will have to undergo an RT-PCR test for Covid-19 after arriving at the Calcutta airport from Tuesday even if they carry a negative report of a test done before boarding the flight.

The decision was taken after the ministry of health issued a guideline in the wake of reports that mutant variants of SARS-CoV2 that are more contagious than earlier strains are in circulation in many countries.

According to airport officials, nearly 500 passengers who will arrive on four flights from west Asian countries on Tuesday will undergo the RT-PCR test.

New counters for collecting swab samples of passengers were set up at the international arrival area on Monday. The ministry of health has issued a new advisory for international travellers, particularly those more at risk of contracting Covid-19.

“There is increasing evidence that the mutant variant of SARS-CoV2 are in circulation in many countries and these mutant variants are driving the pandemic in their country of origin. So far the three SARS-CoV2 variants in circulation vis-a-vis UK variant, South Africa variant and Brazil variant have been detected in 88, 44 and 15 countries respectively,” the guideline issued by the health ministry stated.

According to the guideline, all international travellers coming or transiting from flights that originate from the UK and other European countries and West Asia will have to undergo a self-paid RT-PCR test after arriving in Calcutta. Those arriving from South Africa and Brazil will also have to undergo the test.

“They must have the RT-PCR negative report of the test done within 72 hours before boarding flights from those places. After arrival, their swab samples will be collected at the new counters and the passengers will be allowed to leave,” said Kaushik Bhattacharya, the director of the city airport.

The health department will contact the passengers who will test positive.

International passengers arriving in Calcutta from these places and then transiting to other Indian cities have to wait for six to eight hours at the airport after giving the swab samples for the test reports, the health ministry guideline has said.

Airlines will have to inform the passengers about the wait.

“If a passenger tests positive, his or her sample will be sent for further tests to find out whether the virus is a mutant variant of SARS-CoV2,” said an official of the health department.

Earlier, passengers arriving from the UK without an RT-PCR test report were made to wait at the airport after collecting their swab samples.

Officials, however, said it was not feasible to keep hundreds of passengers waiting at the airport for more than six hours. So, it has been decided that they would give the samples and go home.

Six counters have been set up by Suraksha Diagnostics at the Calcutta airport to collect the swab samples. A passenger will have to pay Rs 950 for the test, said an airport official.

“If any passenger refuses to pay, we’ll inform the state government authorities,” said the official. Metro had earlier reported how many international passengers had refused to pay for going to a quarantine centre after arriving at the airport.

Of the four flights from the Gulf region that will land in Calcutta on Tuesday, one (Qatar Airways) is from Doha. The three others are from Dubai and they are operated by Emirates, IndiGo and SpiceJet.

Calcutta does not have any direct flight to Europe. Passengers coming from the UK, Europe, South Africa or other countries either transit through West Asian countries or Delhi and Mumbai.

“Now, we are having regular flights from Dubai, Doha, Bangladesh, Nepal and Bhutan,” said an airport official. “Those passengers coming on flights from Doha and Dubai need to undergo the RT-PCR test. Others will have to self-monitor themselves for 24 days,” said the official.

State health department officials said they were keeping a watch on the Covid situation and have set up a ward at the Infectious Diseases Hospital in Beleghata for those found to have been infected with a mutant strain of SARS-CoV2.

The state is also not allowing flights from cities like Mumbai, Pune, Nagpur, Chennai and Ahmedabad to operate daily to Calcutta. Flights from these cities are coming three days a week.

“There is again a surge in Covid cases in states like Maharashtra. So, as of now, there is no plan to increase the frequencies of these flights,” said a state government official.