Fuel past Rs 100, expenses shoot up in Calcutta

The Telegraph speaks to two such people affected by spiralling fuel prices, for the second time since March this year 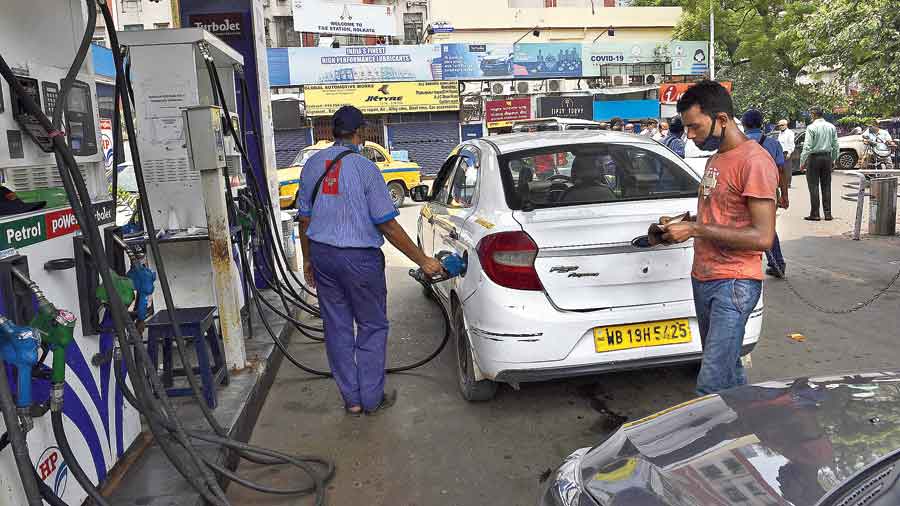 The spiralling fuel prices have scalded most people whose livelihoods are inseparable from their vehicles.

The petrol price will cross the hundred rupee mark in Calcutta on Wednesday, when motorists will pay Rs 100.23 a litre for the fuel. Oil marketing companies increased price by Rs 0.40 a litre overnight.

The Telegraph spoke to two such people affected by spiralling fuel prices, for the second time since March this year.

“Paying for the EMI, insurance and maintenance from my own pocket makes no sense. So, I have stopped two similar contracts.

Only one 3,000km contract is still active because the client does not travel more than 2,500km,” Kayal told The Telegraph.

“I have my back to the wall,” said Kayal. To cut costs, he has discontinued the services of a domestic help. He has also stopped English tuitions for his son, a NEET aspirant.

In Calcutta, the base fare for a metered taxi is Rs 25 for 2km, and thereafter Rs 12 a kilometre. If Yadav travels 100km a day, he goes without any passenger for at least 20km.

“Insurance, permits and taxes eat up my savings. Ideally, I should be able to pay them from my earnings. If the fare does not go up, I don’t know what lies ahead,” said Yadav.

He has been earning some extra bucks ferrying people to Howrah and Esplanade over the past few days, in the absence of too many public transport options.

He takes four people and charges Rs 75 from each for a ride from Behala to Esplanade. Yadav had to sell his wife’s jewellery for their son, who has started a training course to be a technician of electrical appliances.