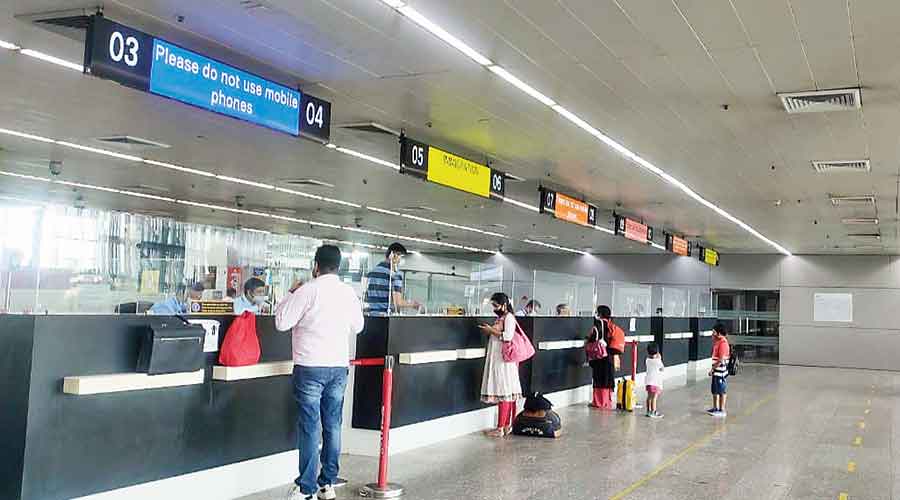 Passengers at the Calcutta airport’s departure counters before boarding the first non-chartered international flight, to Dubai, after the state government lifted curbs
Sourced by The Telegraph
Sanjay Mandal   |   Calcutta   |   Published 17.09.20, 03:16 AM

The first non-chartered international flight since the Bengal government lifted restrictions landed in and took off from Calcutta on Wednesday. The government had imposed the curbs as a precaution against Covid.

The Emirates airline flight from Dubai arrived with 179 passengers in the morning under an air-transport-bubble arrangement, said airport officials. It took off for Dubai with 110 passengers.

The state government had given a no-objection certificate for the flight a week before.

SpiceJet will operate a flight between Calcutta and Dubai on Thursday, an official said. The airline has several other flights on the route planned for this month.

Emirates has planned at last two more Dubai-Calcutta flights this month. Airport sources said IndiGo was planning to operate a flight to and from Singapore in the last week of September. Air India's first of the several Calcutta-London direct flights under the Vande Bharat evacuation programme is scheduled for Thursday.

In July, the Bengal government had asked the civil aviation ministry to stop evacuation flights from international destinations after hundreds of passengers refused to go to a paid quarantine centre after landing in Calcutta and went home instead.

Any flight from abroad needs a no-objection certificate from the state government.

Later, the government eased the restrictions and allowed chartered flights from abroad to arrive in Calcutta. Earlier this month, the state government, following appeals from airlines and travel operators, started giving approvals for evacuation as well as air-transport-bubble flights.

The 179 passengers who arrived in Calcutta on the Emirates flight had tested negative for Covid-19 within 96 hours before the journey. “All arriving passengers will have to undergo home quarantine for 14 days,” said an airport official.

Those boarding the Dubai-bound flight from Calcutta got their tests done, too.

The Boeing 777 aircraft that Emirates operated can carry 360 passengers but India’s directorate general of civil aviation has restricted the number of passengers to 225.

SpiceJet has a good number of bookings for its Calcutta-Dubai flight, officials said.

“Already, we have 182 passengers booked from Dubai and 135 from Calcutta for Thursday’s flight. We have got the NOC from the state government. More flights to Dubai are scheduled for September 24 and 26,” said Debjit Ghosh, sales head (east), SpiceJet.

Tour operators said they were having good bookings for the flights.