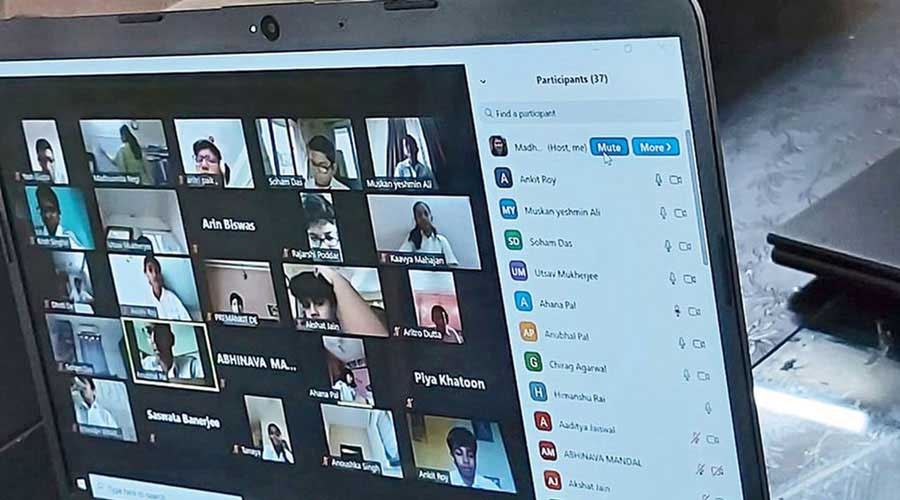 A parent in Dubai said his two daughters had been admitted to a city school and that they were attending classes from the UAE. But at times they feel they are “neither here nor there”.
File picture
Jhinuk Mazumdar   |   Calcutta   |   Published 22.09.20, 12:47 AM

Students in several city schools are attending classes online from various cities; some even from different countries and they have no idea how their school looks like.

They have been admitted to a city school after their parents got transferred here or the family decided to shift to Calcutta. For hundreds of such students, six months into the session, the school is still “new and unknown”.

The new school tries to “integrate” them into the system but a feeling of “isolation” persists among these students because their peers are acquaintances and not really friends, a parent said.

A parent in Dubai said his two daughters had been admitted to a city school and that they were attending classes from the UAE. But at times they feel they are “neither here nor there”.

A Class V student who came to the city in March asked a teacher recently if he could visit his “new school”. The school had to turn down the request because of the prevailing condition.

“New students join every year across classes… it has always been a challenge for such students to make new friends and establish themselves in their peer group… but now it is harder because of the limited opportunity to interact and establish a connection with their peers,” Amita Prasad, the director of Indus Valley World School, said.

Some of the new students engage in activities and interact with other students but it is doubtful if they make friends, Prasad said. A virtual tour of the school is no substitute for a real visit and students cannot “even visualise their school”, she said.

Teachers across schools have noticed students not opening up. “When some girls were asked to introduce themselves they appeared hesitant and uncomfortable; they were quiet,” Aruna Gomes, the principal of Loreto House, said.

The “bonding” among students happens outside the classroom, in the playground or during break time — all that is missing now, principals and teachers of several schools said.

A person in Dubai got his daughters admitted to a CBSE school in Calcutta. The call had been taken months before the pandemic he said.

“We had applied for transfer certificates from the school in Dubai… going back was slightly tricky and my daughters were mentally prepared that they would have to leave for Calcutta. Now, they seem to be in both places,” D. Banerjee said.

His daughters have been admitted to Class VII and Class XI.

“They look forward to joining their new school. The interaction with their peers is virtual, be it exchanging notes or texting... that cooperation is there, though,” he said.

But it is not just talking about studies or sharing notes.

“Not going to school has created a huge void and for new entrants it is natural to feel isolated at times…. They need to joke or do silly talk with their contemporaries,” Nupur Ghosh, the vice-principal of Mahadevi Birla World Academy, said.

Children will feel they are “left out” because in school new students merge into the system; that is limited now, Farishta Dastur Mukerji, psychotherapist and a school counsellor, said.

“What I feel and see is there is a feeling of being an outsider till the system includes them... connecting with each other starts after having physically met and they are bound to feel left out,” Dastur Mukerji, the counsellor at Calcutta International School, said.

“Socialisation is a huge part of the process of going to school and that has been taken away from these kids. They do connect with each other over gadgets but that can be diluted.”

In many schools, Class XI is an entry point and the “ice would break” within a month. But that is not happening and schools have had to improvise ways to make it easier for students.

At Loreto House, students are given projects or assignments where they have to work together in groups but every student has to make a slide.

In Indus Valley, teachers give responsibilities of various school activities to students.

“In the value education period for Class XI, I give them a link and a topic to work on and leave the class. I rejoin towards the end of the class when they would make the presentation. These are ways to integrate new students into the system but it is nothing compared to school,” principal Gomes of Loreto House said.

The limited time for online classes is another challenge that schools have been trying to overcome.

“The timetable is structured; we do include new students in various activities but the scope of the school is limited when it comes to helping them form social relations,” director Prasad of Indus Valley World School said.