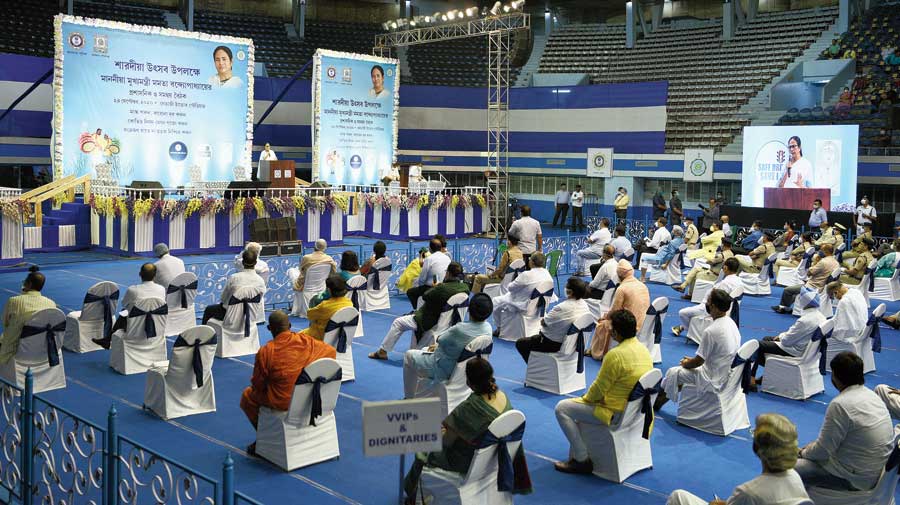 Chief minister Mamata Banerjee on Thursday laid out the plan for Durga Puja 2020, issuing guidelines from inauguration to immersion that the organisers and administration are expected to follow. A set of directives has been issued keeping the spread of Covid-19 in mind.

Based on Mamata’s announcements at Netaji Indoor Stadium on Thursday, here’s what Puja 2020 could be like

Entry and exit should be different.

Puja committees have been asked to keep the inauguration low-key. Those who would not be able to organise an inaugural programme can consider the online option.

Pandal-hopping at night will be allowed between Tritiya and Ekadashi, the chief minister announced, asking the police to make necessary arrangements.

Overcrowding during anjali or sindoor khela will not be allowed this year. Anjali timings should be staggered and priests should use a microphone to say the mantra so that people do not have to huddle in a narrow space and the sound reaches those standing even far away.

Those who will offer anjali may carry their own flowers.

Staggered timings and separate places have been suggested for sindoor khela to avoid crowding.

The chief minister said most of the cultural programmes are held outside pandals or on the roadside to attract crowds. Such gatherings may lead to a spurt in infections. “This year we are requesting you to avoid cultural programmes as too much mixing would cause a spike in the number of Covid cases,” Mamata said.

The chief minister urged the puja organisers to avoid big processions during immersion. Fewer people should be involved in the process, she said. The officers in charge of the police stations will have to coordinate and fix dates for immersions in a way that the ghats do not get crowded.

The single-window system for organisers to apply for permission will start functioning on October 2. The government has launched a web portal called Aasaan, which will serve as the single window for applying for permission.

The offline option is open, too.

The chief minister urged the organisers to deploy more volunteers during the puja and to mark circles in the pandals to ensure visitors maintain a safe distance among themselves. She cited the example of how she drew circles in markets at the start of the Covid pandemic in Calcutta.

Every volunteer has to be given a mask and sanitiser and, if possible, a face shield.

The chief minister asked organisers to provide hand sanitisers to visitors at least half a kilometre before the pandal. She also asked them and the police to keep excess masks for the poor, who would not be able to afford one. “If someone comes with-out a mask, give the person a mask if you have one or request him or her to get a mask. Or at least ask them to cover their face with cloth,” she said.

Wearing a mask and disinfecting hands with sanitiser before entering a pandal is a must.

The puja committees have been told not to allow more than two outside vehicles for judges at a time. “Please opt for virtual screening. This year Biswa Bangla will do a virtual tour of pandals to select its winners. Those who will give away prizes should limit their visiting time between 10am and 3pm. Please avoid the evening rush,” she added. Crowds have to be avoided at any cost, the chief minister stressed.

“Start using social media and conventional media to spread awareness about physical distancing,” was the chief minister’s message to the organiser and the police. All clubs should have a public announcement system for timely announcements.