Advertisement
Home / West-bengal / Calcutta / Covid: Excuses for stepping out amid curbs in Calcutta

Covid: Excuses for stepping out amid curbs in Calcutta

Till Friday evening, the city police had prosecuted 9,329 people — 6,336 on Thursday alone — compared with 1,272 on Wednesday in the same time frame 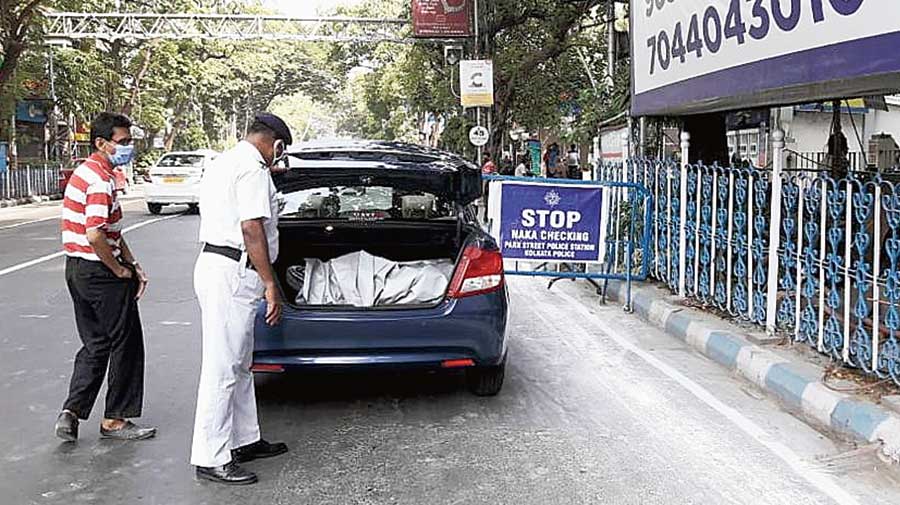 ◙ A man on the Maidan said he was there for his daily exercise. The police prosecuted him

Till Friday evening, Calcutta police had prosecuted 9,329 people — 6,336 on Thursday alone — compared with 1,272 on Wednesday in the same time frame. Out of the 9,329 cases, 6,753 people were prosecuted by the traffic cops over the two days.

Most prosecutions were between 10am and noon, when there is a restriction on the opening of shops and the movement of people not engaged in emergency services.

The government has allowed retail shops in the city to open between noon and 3pm. People going to shops could be spared from prosecution. However, cops said they were trying to stop every person on the roads and ask why they were outside.

All nine divisions and 25 traffic guards of Calcutta police conducted checks at all major crossings in the city and found hundreds out on the roads without a justifiable reason.

“Most of the prosecutions are under Section 188 of the Indian Penal Code and Section 200 of the CrPC. They will be summoned by the magistrate where they will be asked to explain why they violated the lockdown rules. They may have to pay a hefty fine and land up in jail for a few months, too, if the magistrate orders so,” said a senior officer in the traffic department.

“Many people are trying to misuse this relaxation period between 10am and noon and then between noon and 3pm. The volume of vehicles is quite high in the city, mostly because vaccination camps are being organised at different locations. But many are also making false excuses in the name of going to vaccine centres,” said an officer in Golpark.

Another officer said at times, people gave a reason but could not provide documents. “In such cases, we are taking the identity card of the person for verification at a later stage. The volume of traffic was very high on Friday and we could not detain the vehicles for a long time because it would have resulted in a traffic snarl,” said the officer posted near New Market.

If people could not produce a document or an identity card, they were prosecuted.

The police are noting down mobile numbers of all those being prosecuted. The contact details will be sent to the court to decide on the next course of action against them.