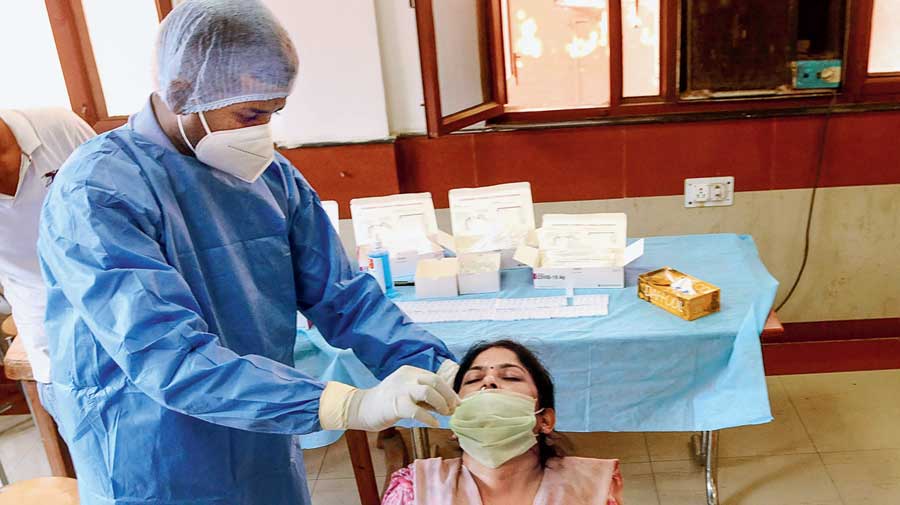 On the day CPMS was introduced, only three government hospitals had uploaded the data. More than 150 hospitals, including a few run by the government, later joined the initiative, officials said.
File picture
Sanjay Mandal   |   Calcutta   |   Published 12.10.20, 01:35 AM

The state government is putting on notice private hospitals that have not joined an initiative to enter treatment details of each Covid patient every day in a system so the government could monitor whether the protocol is being followed.

The Covid Patient Management System (CPMS) was introduced by the state health department on June 14 to monitor the condition of patients who have tested positive for Covid-19.

“The system helps us in real-time monitoring of every patient across the state. Our experts visit critical patients to monitor their treatment. The system played a key role in bringing down the Covid case fatality rate in Bengal from around eight per cent to one per cent,” said a health department official.

It also helps the government ascertain whether a patient has been made to undergo unnecessary diagnostic tests or made to stay in intensive care units without a valid reason, officials said.

On the day CPMS was introduced, only three government hospitals had uploaded the data. More than 150 hospitals, including a few run by the government, later joined the initiative, officials said.

However, data reveals that several private hospitals are not uploading details of their patients. CPMS data available with Metro for a few days in September and October revealed that some hospitals had not uploaded data even once on those days.

“Most big private hospitals are uploading data every day but a few are not doing so. We are asking them to upload the relevant data every day,” an official said.

There are four categories of hospitals, ranked on the basis of transparency index. The hospitals uploading all data are in the green box, and those are followed by the ones in the blue, yellow and red boxes.

“PMS updation percentage is 0 per cent. The hospitals within this category have failed to comply with orders issued vide health and family welfare department’s order,” the note below the daily performance list states about the hospitals in the red category.

“We were uploading all data till recently. But the staff dedicated for the work have left. We’ll resume uploading data soon,” said an official of Ekbalpur Nursing Home.

A Tata Medical Center official said they had written to the health department explaining why the data could not be uploaded. “The health department monitoring team had come to our hospital a few days back and were satisfied with our protocol,” he said. An official of the AMRI Hospitals group said their team was updating data in the later part of the day.

A health department official said CPMS helped the government track and monitor online every Covid patient in hospital till his or her final outcome. It also aims to reduce mortality rate and improve recovery rate.

“If the condition of a critical Covid patient improves and there is no need to keep him or her in the ICU, we ask the hospital to immediately shift the patient to the general ward,” the official said.

“We have a dedicated team of five people that upload data of every patient daily. They have to visit every patient, take protections and note down all data and then compile those and update,” said Sudipta Mitra, the chief executive of Peerless Hospital.

“The cut-off time to upload the date is midnight and our five-member team completes uploading all the data late in the night every day,” said R. Venkatesh, regional director, eastern region, Narayana Health group of hospitals.