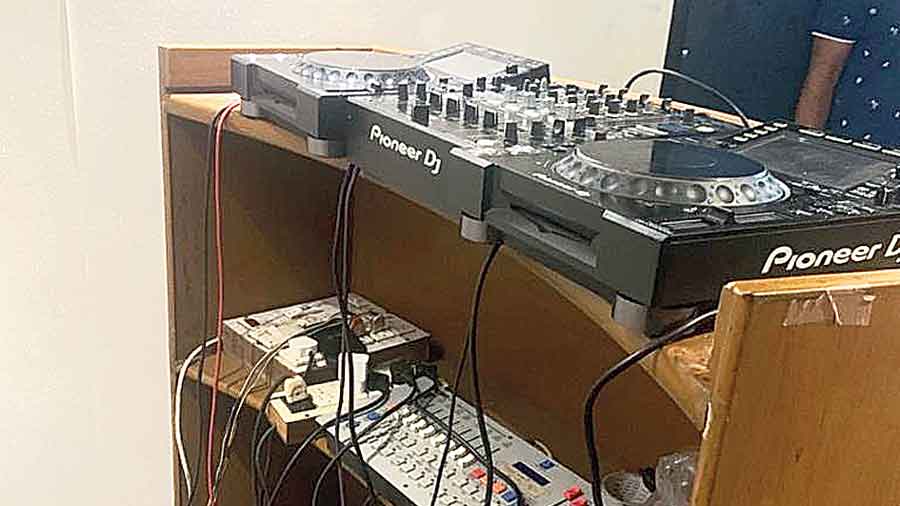 The Park had organised an elaborate console for a disc jockey to perform on the third-floor corridor where guests danced till police arrived past 1 in the morning on Sunday, officers investigating the case said.

There were over 50 guests in the corridor and the revelry began late at night, well past the time — 9pm — when night curfew kicks in across the state because of Covid-19. Some of the guests, the police said, had left by the time the cop team turned up at the Park Street hotel.

In all, 37 people were arrested at the hotel for partying in violation of Covid norms.

The disc jockey’s console was connected to large sound boxes, which were placed on one side of the corridor where the late-night party was held. Guests from the rooms booked previously across the second and third floors, as well as from outside, joined the revelry.

The console box was placed on a three-tiered wooden desk. The turntable was placed right on the top shelf for the DJ to use.

The second tier of the desk had the remaining part of the console with electric wires fitted into a socket.

The lowest shelf had a heap of black, yellow and red wires connected to the sound boxes.

Offices of the detective department of Calcutta police said the hotel authorities had made the entire arrangement for placing the console box and getting a DJ.

“We have spoken to some of the hotel employees and collected information about the Saturday night party. We will speak to a few other employees as well,” a senior police officer at Lalbazar said on Thursday.

“Apart from the accused, the FIR also has the name of the hotel and it is imperative for us to talk to the staff.”

Officers who have spoken to hotel employees said that in all probability the party with loud music would have continued till dawn, in violation of the restrictions imposed by the state government to combat the spread of the coronavirus.

“After speaking to some of the employees, it appears that the hotel authorities were aware that a late night party was being organised on Saturday,” the officer said. “The sound boxes and the DJ console set were accordingly moved to the third-floor corridor.”

The hotel authorities did not react to the allegations. In an earlier statement, the management had said that being in the hospitality business for over five decades, the hotel had been complying with all rules and regulations and would continue to do so. A spokesperson said on Thursday: “We have nothing more to add.”

The state government has banned most gatherings as a precaution against Covid. Weddings and related events can be held with up to 50 people. The cap for funerals is at 20.

The excise department has prohibited sale of liquor from any of the bars on The Park premises. The department has sought CCTV footage of the party to find out who had served liquor to the revelers.

Investigators have collec-ted CCTV footage of the corridor where the party was held and recorded statements of seven of the 37 accused who are in police custody. The rest have obtained bail.

Those in custody will be produced in court again on Friday.