Shortage of vaccines cited, no bookings for Thursday 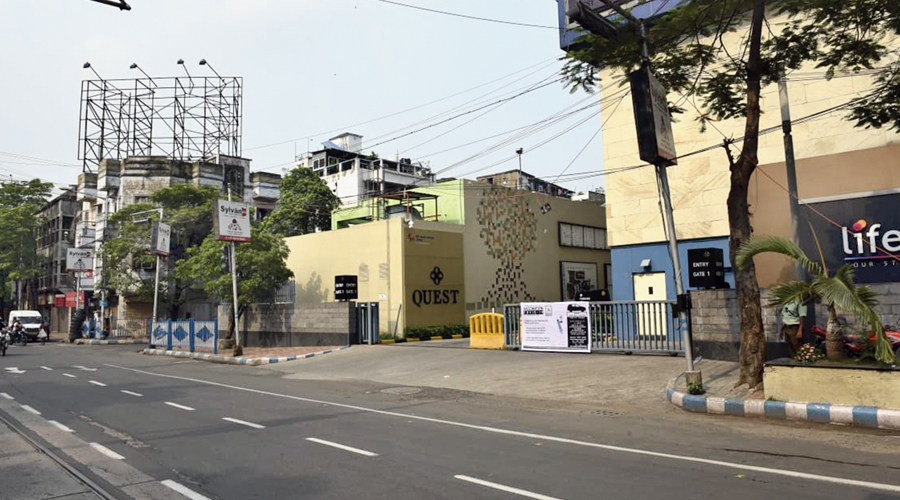 The road in front of Quest Mall wears a deserted look as only a few people were vaccinated at the drive-in facility on Wednesday.
Picture by Bishwarup Dutta
Subhajoy Roy   |   Calcutta   |   Published 10.06.21, 02:01 AM

The drive-in vaccination at Quest Mall, started less than a week ago by the Calcutta Municipal Corporation in association with a private hospital, has been stopped because of a shortage of doses.

No bookings for Thursday were given on Wednesday. Only 24 people were vaccinated at the site on Wednesday, down from over 200 on Tuesday.

“We did not want to refuse anyone who had booked slots earlier. So, only 24 people were vaccinated. We will resume bookings at Quest Mall once adequate quantities of vaccine doses are available,” said an official of the state e-governance mission team, which is managing the WhatsApp chatbot through which slots for vaccination at the mall can be booked.

An official of the state health department said there were only 10 lakh vaccine doses on Thursday morning for the entire state (excluding the ones in possession of private vaccination centres). By evening, about two lakh of the doses had been administered.

“We are expecting a fresh consignment on Thursday,” said the official.

A resident of Ballygunge, who tried to book a slot at the Quest Mall site for her home help, rued the fact that such a good initiative had to be stopped.

“The drive-in vaccination at the mall was giving specific time slots to people, which made the entire process very seamless. It is unfortunate that such an initiative had to be halted,” she said.

The suspension of the vaccination at the mall comes at a time when vaccination sites are being opened at other malls across the city. But officials of hospitals conducting vaccination said uncertainty over supply remained a worry.

The AMRI Hospitals group started a drive-by vaccination on Leslie Claudius Sarani in the Maidan area on Wednesday and inoculated 150 people. “Only four-wheelers are allowed and pre-registration on CoWIN is mandatory. One does not need to book a slot. They can just come with the CoWIN registration in a car,” said an official of AMRI.

The hospital will operate two more drive-by vaccination sites  — one on the service road near the Ajoynagar crossing of EM Bypass from Thursday and another at the Calcutta police traffic training school in Tallah from Friday.

A walk-in vaccination has also started at City Centre Salt Lake. “We vaccinated over 2,000 people on Wednesday. Our volunteers will also help a person register on the CoWin, portal,” said Ramesh Pandey, a director of the Ambuja Neotia group, the owner of City Centre.

Anyone who is 18 years or older can walk in for the first or the second dose.

The mall is administering Covishield.