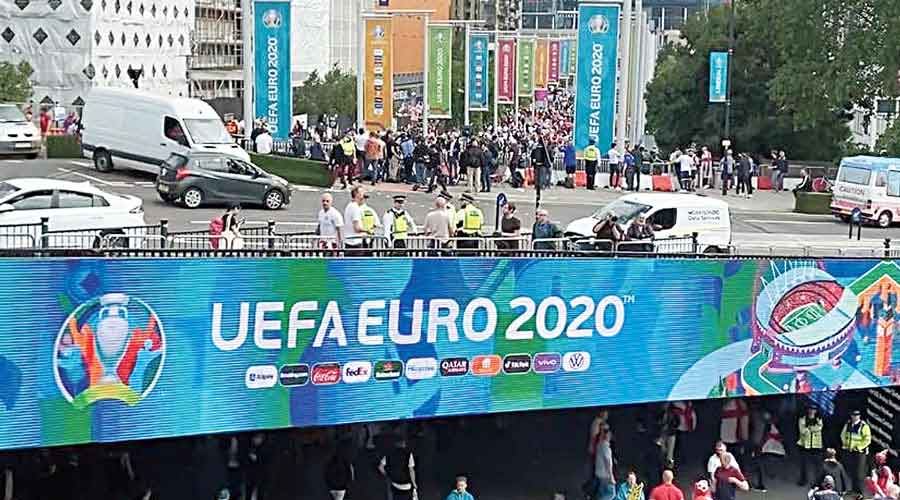 The Wembley Park Underground station decked out for the tournament, five minutes away from the stadium.
The Telegraph
Sudeshna Banerjee   |   Calcutta   |   Published 10.07.21, 01:49 AM

When Harry Kane stepped up to take the decisive penalty in the Euro semi-final against Denmark, Rajarshi Sarkar was watching the match live at home on TV with wife Suklatithi Chakraborty. But unlike the rest of the audience worldwide, he already knew that the captain of the Three Lions had scored.

Rajarshi is no soothsayer. It was the roar of the 60,000-plus spectators in the stands on Thursday that had given away the answer.

“We stay on the approach road to the stadium, which is a five-minute walk away. The Wembley arc can be seen from our balcony. There must be a lag of a few seconds between the on-field action and the telecast,” he told The Telegraph from London, adding how festive the atmosphere was that night. “Though Durga puja evokes a different emotion in us, the jubilant march of the supporters was somewhat like the stream of pandal-hoppers on the streets on Ashtami night in Calcutta. It is difficult to decide which is noisier,” said Suklatithi, a Tollygunge girl.

The IT professional from Kharagpur and his wife purchased the Wembley Park apartment six years ago. Since then, their life revolves around matches in the stadium or concerts in the adjoining Wembley Arena. An email from the residents’ association alerts them about the date and time when no parking would be allowed in the local parking lots. 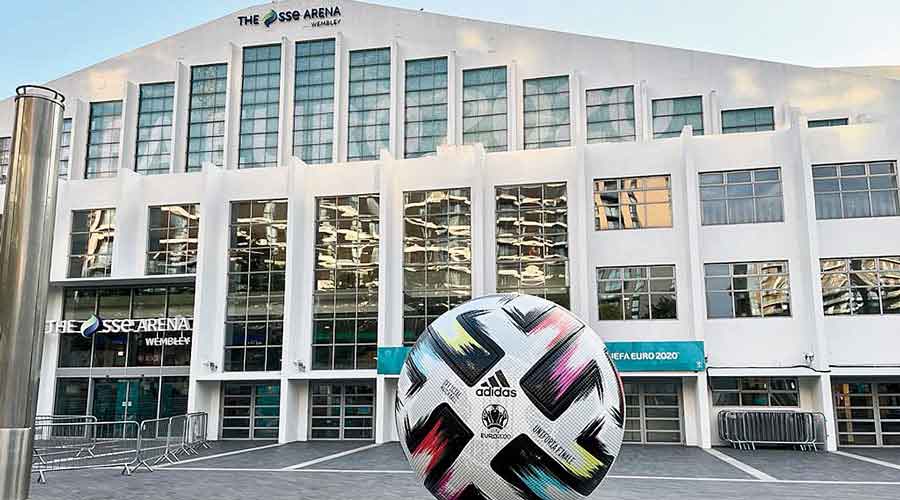 The stadium.
The Telegraph

The Euro matches have triggered stricter restrictions. “Engineers Way, the street in front, gets taken over by police vans. Blockades for vehicles are put up at both ends. Only we residents are allowed in through a circuitous route,” Rajarshi said.

But the couple do not mind. “It is refreshing to see so many people on the streets after a year of silence during the lockdown.  We are feeling so positive ever since the tournament started being hosted here,” Suklatithi pointed out.

Rajarshi has been inside to watch a few matches of Tottenham Hotspur when they played their European home games at Wembley in 2016-17.

The Wembley Park Underground station is five minutes away and Suklatithi clicked pictures of it, decked out  for the tournament, on her way to work. “Most fans come by metro. Some hire a bus and come in a group. Everyone wears the team jersey,” she added.

Tickets for the semi-finals and finals cost a bomb (upwards of £5000 for Sunday), especially after England made the cut. But even if they cost less, Rajarshi would have been unwilling to venture out. “There is a big food court called Box Park outside the stadium where they have a big pub and lots of smaller eateries around. Had the pandemic not been a factor, we could have gone there. But there is no need to take a risk now.” Watching the legions of maskless spectators walking by has not inspired confidence.

The pandemic-induced anxiety is not affecting the celebratory mood though. “Every other house or car has the St George’s cross fluttering. Whenever England scores a goal, people dash out to the balcony, beating a drum or blowing a whistle. We too waved the flag at the fans when they were passing by after the semi-final, chanting ‘England, England’ and singing ‘It’s coming home’,” Rajarshi recalled.

Now all they seek is another winning strike from their talisman Kane to hear the Lions roar and bring the Cup home.