When parents invade online classes and do kids’ work

Guardians racing one another to finish assignments; detrimental, say teachers 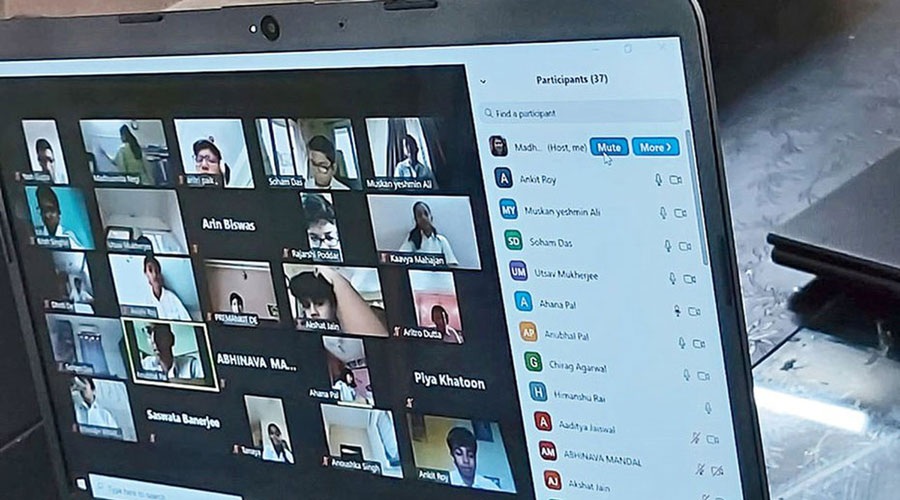 Prompting answers during classes is common but now it has become “a kind of competition among parents”
File picture
Jhinuk Mazumdar And Bishwarup Dutta   |   Calcutta   |   Published 10.07.20, 02:45 AM

Parents of some primary schoolchildren are doing their school assignments instead of letting them do it, some teachers have said.

At times, they are even competing with other parents to be the first to upload such assignments on their common WhatsApp groups, the teachers have said. This leaves those who want their children to take some time and work on the assignments themselves annoyed.

Some institutions have strictly told parents not to log in from multiple devices, there are some parents who use one of the earphones or sit beside the child and “attend classes”, according to some teachers.

The level of efficiency in an assignment is often a dead giveaway and at times the child unwittingly reveals he/she did not do the assignment when he/she fails to answer questions on the work the very next day, a teacher said.

A few schools have been counselling parents this is “no way of recognition when the child is not learning” and that instead of helping the child parents are spoiling them.

“In our school, the teacher moves up in class with the child… some of them have noticed that suddenly some are able to do all the work assigned to them perfectly, mostly in Classes II to V,” Nupur Ghosh, vice principal of Mahadevi Birla World Academy, said. “The teacher can understand it is being done by the parent and in the process the child is not learning.”

Prompting answers during classes is common but now it has become “a kind of competition among parents”.

“As soon as the teacher posts a certain assignment on the WhatsApp group, within minutes parents start uploading completed assignments,” a private firm employee whose daughter is the student of a missionary school said. “It is impossible for a child in the primary section to complete it so fast.”

In fact, on some occasions, parents ask teachers to give them more work, making it difficult for other parents who want their children to do assignments on their own.

Teachers have got reports of parents comparing notes on what has been taught in the other section and whether their section has missed any portion. “They did so when children were attending school and perhaps now even more,” the principal of a school in central Calcutta said.

Though some parents have started going back to work, some are at home and teachers have noticed that assignments are turning into ones for parents and not the children.

At South Point School, children of Classes III, IV and V are being quizzed on all subjects to understand how much they have learnt.

Parents are helping because they want their child to excel and though in an online or virtual class certain monitoring is required parents should know where to draw a line, Chadda said.

“Whenever there is a certain competition, parents race each other… they do not want their children to perform poorly. This creates pressure on the child,” the head of a school in south Calcutta said.

Schools are either counselling parents, telling them that it is detrimental for the child. “We have video sessions in the presence of the child to counsel them that we understand parents are looking for recognition… but this is no way of attaining one when the child is not learning… because children are innocent it is they who reveal,” Ghosh said.

“There have been a few cases and we have counselled parents. It is easy to understand because teachers know exactly what the child is capable of doing,” Minnie Sengupta, the principal of Birla High School Mukundapur, said.