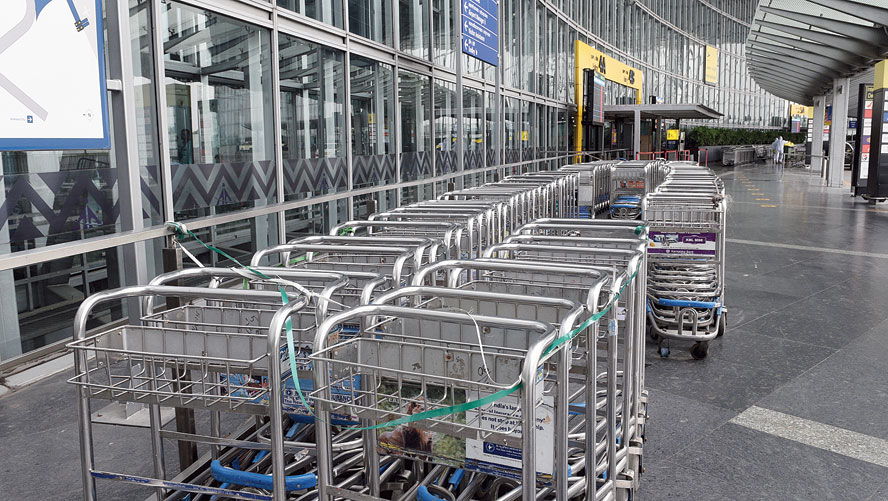 Lines of locked trolleys outside the airport terminal, at the departure level, on Thursday
Pictures by Pradip Sanyal
Sanjay Mandal   |   Calcutta   |   Published 19.06.20, 03:58 AM

Thousands of trolleys at Calcutta airport are locked and passengers have a tough time as the 40-odd ones supposed to be available at the departure/arrival sections are mostly invisible.

Hundreds of passengers — elderly and suffering from various ailments and many accompanied by infants — have been approaching terminal managers and airline officials daily, asking for trolleys but not getting them.

Before domestic flights resumed services on May 25, the civil aviation ministry had issued a set of guidelines, in which it was mentioned that trolleys should be used sparingly.

“Passengers are advised to carry minimum baggage as use of trolleys will be permitted sparingly,” the guideline said.

“Many passengers are not following the advisory and bringing more than one piece of check-in baggage. They will need trolleys and airlines cannot deny them boarding because of travelling with several pieces of luggage,” an airport official said.

Calcutta airport handles close to 14,000 passengers daily on average (departure as well as arrival) and there are barely 40 trolleys available at the two sections, according to airport officials. 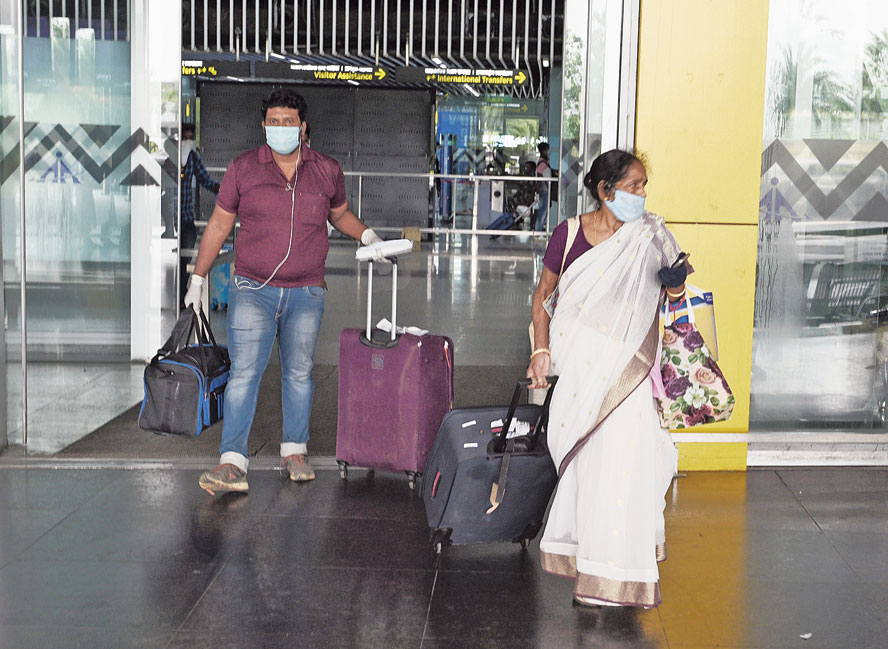 After getting off flights, many elderly passengers and those travelling with infants want trolleys but by the time they collect their baggage from the conveyer belts, these few trolleys have been taken by other passengers, according to officials of various airlines. “Then we have to run around and get them a trolley,” an airline official said.

“We have a system to sanitise trolleys by spraying disinfectants from a machine every time a trolley is used. Trolleys are part of basic facilities and despite the ministry guidelines, we are trying to provide passengers with that facility after ensuring safety,” the Mumbai airport official said.

The Mumbai airport has close to 7,000 trolleys.

Calcutta airport has close to 3,000 trolleys and the shortage, which was faced earlier, had been resolved. But after flights resumed during the pandemic, most of the trolleys were found tied with ropes and a few were available for passengers.

An airport official said the main reason behind making trolleys unavailable was the matter of sanitisation. “It’s not possible to sanitise 3,000 trolleys every time a passenger uses one. We don’t have such manpower,” the official said.

There are 200-odd members of the housekeeping staff who are responsible for sanitising the airport. The international section is practically not functioning except for a few Air India flights bringing back stranded people from various parts of the world under the Vande Bharat scheme.

“Those deployed in the international section have been brought to the domestic areas. But their work has increased because of the sanitisation of the terminal,” the official said.