Tests unlikely to begin soon, though 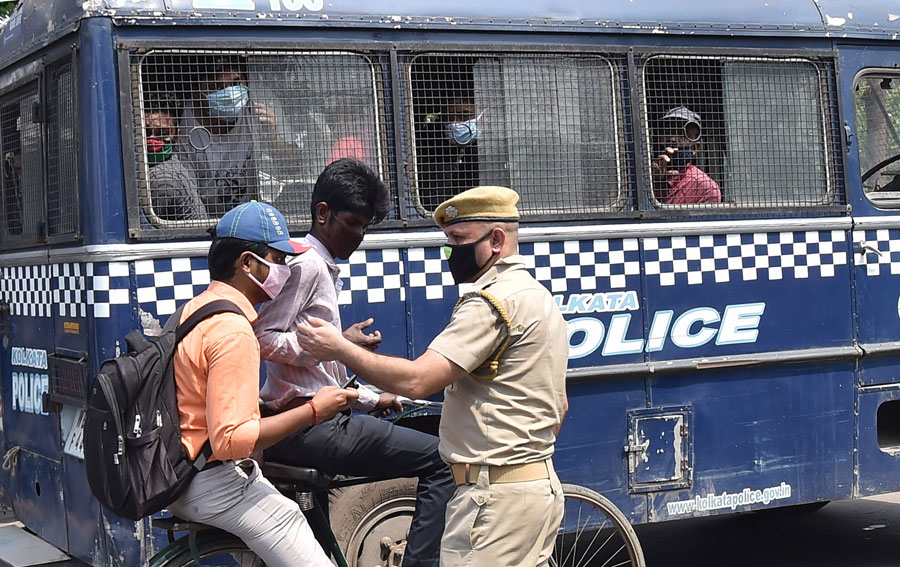 Police stop commuters for inquiry, as offenders who flouted the lockdown sit inside a prison van, during the nationwide lockout in wake of the coronavirus pandemic, in Calcutta on Friday,
(PTI)
Subhajoy Roy   |   Calcutta   |   Published 03.04.20, 08:57 PM

Four more hospitals in Bengal have received the Indian Council of Medical Research’s permission to conduct tests for Covid-19.

The tests are unlikely to begin soon, though, for want of test kits, officials in these hospitals said on Friday.

An official from one of these hospitals said the authorities were trying to start tests from next week but officials from the others said it was difficult to commit a date.

Only five hospitals — three in Calcutta — in the state are currently doing tests for Covid-19. The Centre-run National Institute for Cholera and Enteric Diseases (NICED) and the state-run SSKM Hospital and School of Tropical Medicine are conducting tests in the city. In the districts, North Bengal Medical College and Hospital and Midnapore Medical College and Hospital are conducting tests.

Two private hospitals in Calcutta — Apollo Gleneagles Hospitals and Tata Medical Center — have received the ICMR nod to conduct tests. But neither has been able to start.

An official of Apollo said test kits were still to arrive.

The ICMR authorities have said that RG Kar, Malda and Murshidabad medical colleges will get test kits from them and not Chittaranjan National Cancer Institute. Various components needed to test samples will be provided by the state government, officials of these hospitals said.

“We have to procure it from the market. Kits will be available in the market. But I do not think we will be able to begin tests before the lockdown is lifted,” an official of the cancer institute said. “Since goods movement has been hit, procuring items needed for tests is proving to be difficult.”

An official of Murshidabad Medical College and Hospital said authorities were “trying their best to start tests from next week”. An official at RG Kar said “they were ready with 80 per cent of the preparations” but could not commit a date when tests would start.

A public health specialist said the state and the Centre should sort out hurdles in procuring kits and other stuff needed to conduct tests. “If the number of suspects increases, we cannot afford to wait,” the specialist said.

The three medical colleges are also virus research and diagnostic labs (VRDLs) that receive special funding from the Centre to research viral diseases. A health department official said the VRDLs would be in position to conduct more tests because of their infrastructure advantage. They have dedicated scientists for such tests, the official said.

These labs are approved under the department of health research for “Establishment of a Network of Laboratories for Managing Epidemics and Natural Calamities”, according to the ICMR website.