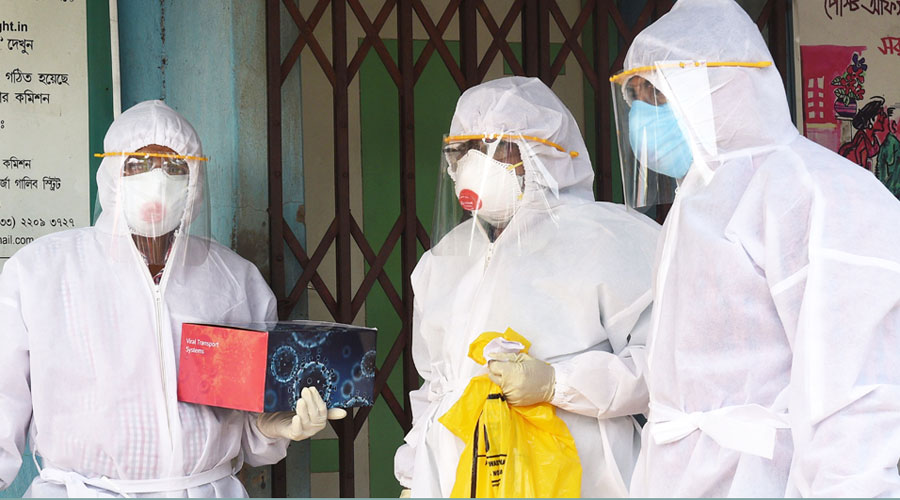 A number of doctors in Calcutta have stopped seeing patients since a spurt in Covid-19 cases forced a fresh lockdown in parts of the city last week.

Some hospitals in the city said the number of non-Covid patients had reduced marginally at the outpatient departments because people were afraid to go to hospital unless it was an emergency, following the rise in the number of coronavirus cases.

One doctor said two of his employees at his clinic are stuck at home because they live in containment zones.

“If they are unable to come, how can I operate my clinic? Other two employees, too, want to stay away because they do not want to expose themselves to the risk of catching the virus. I will resume video consultation for a month,” the doctor said.

A senior gastroenterologist is going to the private hospital he is attached to but not seeing patients in the OPD. Officials said he was only offering video consultation.

The health department said 1,560 Covid-19 cases were reported in Bengal on Sunday, taking the state’s total case count to 30,013.

The Telegraph has earlier reported several times that doctors were wary of seeing patients, fearing they might be infected by the coronavirus. The reluctance of doctors has prompted chief minister Mamata Banerjee to appeal to them to return to work.

A section of doctors finally resumed seeing patients in their chambers but the surge in Covid cases has reversed the trend. At some private hospitals, officials said some doctors were unwilling to examine patients who have not been tested for Covid-19.

“There are some doctors who were earlier seeing patients in the OPD but are not doing so now. They are coming to the hospital only to examine patients admitted under them,” said Rupak Barua, Group CEO, AMRI Hospitals.

“The indoor patients have all tested negative for Covid-19…. The footfall of non-Covid patients has reduced marginally over the past couple of days.”

The number of surgeries started rising at some hospitals following the start of Unlock 1 but it is going down again because many doctors are unwilling to operate.

Belle Vue Clinic usually had 25 surgeries and procedures daily on an average before the pandemic struck. The count went down to around five during the lockdown before rising to more than 10 after the restrictions were lifted. “Last week, we performed six or seven operations. Some doctors are reluctant to do surgeries,” said Pradip Tondon, the CEO of the Loudon Street hospital.

The scare triggered by the virus has also prompted many patients to cancel their appointments.

Most hospitals and polyclinics are only allowing those patients who have prior appointments with doctors. Usually, five to 10 patients are booked for one doctor.

But in the last two to three days, several hospitals said a number of non-Covid patients had gone down.

The RN Tagore International Institute of Cardiac Sciences has seen a 15 per cent dip in the OPD patient count, said an official of the hospital.

Ruby General Hospital has seen a similar dip, too. “We were having nearly 250 patients in our OPDs since the lockdown was lifted. But at the end of last week, we saw the number going down to less than 200. Many people are cancelling their appointments,” said Subhasish Datta, the chief general manager of the hospital.