Until now, only containment zones had been identified online 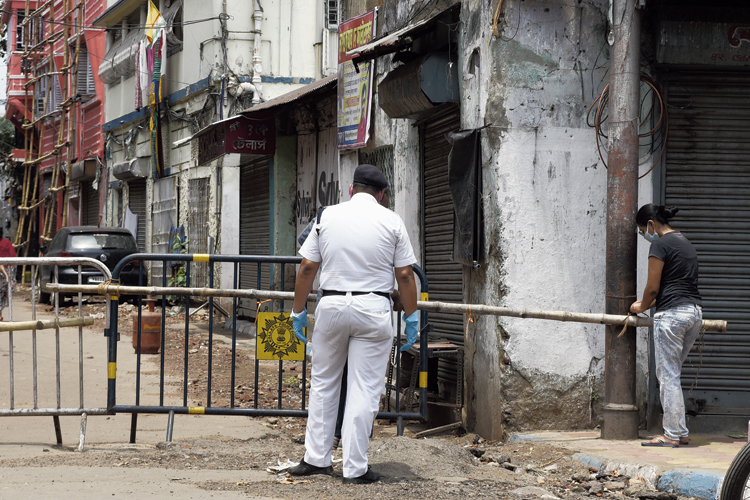 A woman on her way home from the market tried to remove a bamboo barricade, set up by police to restrict pedestrians as part of the drive against Covid-19, in Bowbazar
File picture
Subhajoy Roy   |   Calcutta   |   Published 06.06.20, 08:13 PM

A list identifying all Covid “affected”, “clean” and “buffer” areas in the city has been uploaded for the first time, helping Calcuttans figure out the specific restrictions and relaxations applicable to them and others at a time the lockdown is being eased.

Similar lists for the districts are also posted on the website.

Until now, only containment zones had been identified online. Now, the additional categories of “clean” and “buffer” are also specified.

The Bengal government has divided a Red Zone (any district from where at least one Covid-19 case has been reported) into affected areas, buffer areas and clean areas.

The immediate vicinity of an affected area is called buffer area if it is not clean.

Relaxations of lockdown restrictions depend on whether a locality is in a clean, buffer or an affected area. No shop can be opened in an affected area/ containment zone and no one can enter or leave that area without a valid reason.

Officials of the Calcutta Municipal Corporation (CMC) said the expanse of an affected area had been reduced for the benefit of people in the neighbourhood. As many offices have opened, the civic body and the police have jointly made a plan to ensure as few houses are sealed as possible.

If someone living in a housing complex with multiple towers test positive, only the tower where the person lives will be considered a containment zone or affected area. People living in this tower will remain confined in their homes for 14 days. Those living in other towers of the complex can go out for work, said an official.

The entire housing complex will be considered a buffer area.

For a large standalone building, the entire building where a person tests positive will be classified as an affected area but not the lanes around it or adjacent buildings.

In some cases, police and the CMC are considering only the flat or the floor as an affected area. Here the buffer area will include 10 buildings on all sides.

For a small standalone building, the entire lane will be classified as an affected area if the building where someone tests positive is in a small lane.