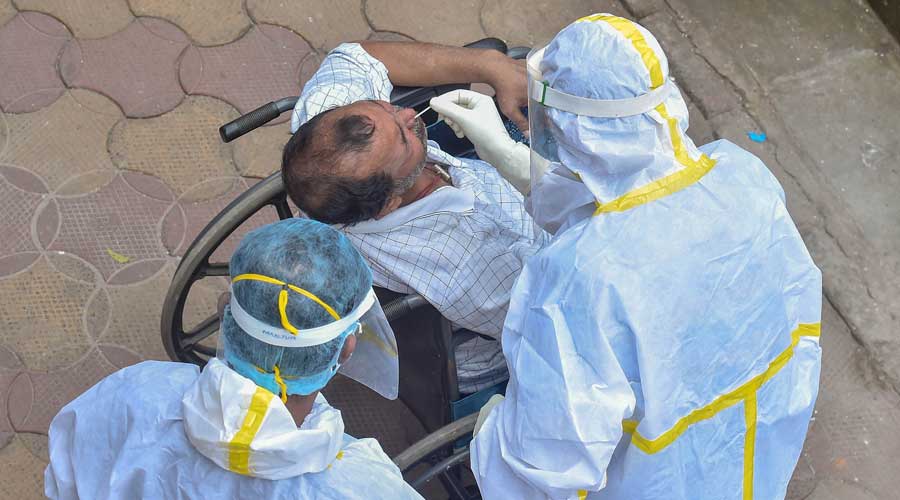 A medic collects samples from a person with physical disability for Covid-19 rapid antigen testing, in Calcutta, on Saturday
PTI
Subhajoy Roy   |   Calcutta   |   Published 11.08.20, 03:17 AM

The regulatory commission for private hospitals has decided to issue a guideline on pathological tests for Covid-19 patients following complaints that some hospitals are conducting unnecessary tests and inflating bills, the chairperson of the commission said on Monday.

An eight-member committee of doctors has been formed to frame the guideline, said retired judge Ashim Banerjee, the chairperson of the West Bengal Clinical Establishment Regulatory Commission.

Banerjee referred to a case in which a private hospital had billed a patient’s family Rs 23 lakh. The patient, himself a doctor, had passed away at the hospital. “We got hold of the bill and found that Rs 7 lakh had been charged for investigations. Out of that, Rs 5.75 lakh was for pathological tests,” said Banerjee.

“We found that one test was done repeatedly. Hence, we decided to form a committee of doctors who can frame a guideline on the kind of tests that are necessary to treat Covid-19.”

The commission chairman did not name the hospital.

The committee that will prepare the guideline comprises Sukumar Mukherjee and Maitrayee Banerjee, members of the commission; Subhankar Chowdhury, the head of endocrinology at SSKM Hospital; Raja Roy, the head of microbiology at SSKM; Sarbari Swaika, of the critical care department at SSKM; Bibhuti Saha, from the department of tropical medicine at the School of Tropical Medicine; Sushruth Bandopadhyay, a critical care specialist from AMRI Hospitals, Salt Lake; and Tanmoy Banerjee, from Medica Superspecialty Hospital.

An order issued by the commission’s secretary said the panel would request the “team of experts to prepare such a guideline to help the Covid-19 treatment that would ultimately reduce the financial burden of the patient”.

The order also added that the guideline would be “suggestive and recommendatory” and not binding. The doctor treating a patient will have the final call, it added.

An official of a private hospital said there was already a team of doctors appointed by the state health department that visited hospitals after every three to four days. The team checks prescriptions, treatment records and whether patients are being given medicines according to the protocol. “The team also checks the kind of tests being done for a patient,” the official said.

Chairman Banerjee said the regulatory commission’s aim was to reduce the financial burden on patients and the team of doctors was appointed keeping that in mind.

The official of the private hospital said Covid-19 patients who had low oxygen saturation had to undergo an arterial blood gas (ABG) analysis routinely. Besides, they have to undergo the liver function test because many of the medicines administered to them are toxic for the liver. Also, Covid-19 patients have to routinely undergo a coagulation profile as their body is often found to develop clots.

A member of the committee, however, said he was not sure how the panel would function — whether or not the members need to enter wards to verify how Covid-19 patients are being treated.

“There are too many committees now. One committee will overlap with the jurisdiction of another. We are not sure how as members of the committee we are going to find out how patients are being treated and what tests they are being subjected to,” he said.

The state government has capped the rate of several items such as personal protective equipment (PPE). It had on June 26 issued an order stating that private hospitals could not charge an indoor patient more than Rs 1,000 a day for PPE and other protective gear. Doctors’ consultation fees for indoor patients have been capped at Rs 1,000 a day and the rate for a Covid-19 test at Rs 2,250.

The commission had earlier this month issued a series of advisories capping the rates of several services charged by private hospitals and diagnostic laboratories. Private hospitals should not charge an OPD patient more than Rs 150 for Covid gear and laboratories collecting swab samples from home should not demand any extra payment other than a conveyance fee of Rs 15 a kilometre, it said.