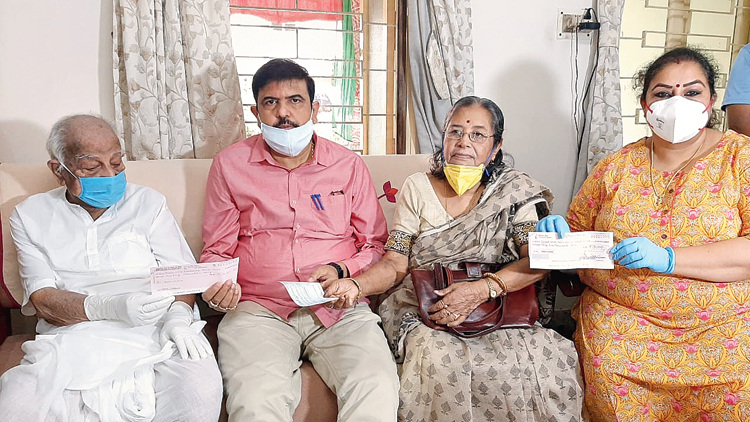 Mihir Chatterjee, who had retired from the Public Works Department in 1979, donated a month’s pension while Manjusha Das Ghosh donated the money from her savings.

Both Chatterjee and Ghosh handed over their cheques to Sujit Bose, the fire and emergency services minister, in the presence of Tulsi Sinha Roy, the councillor of Ward 40, at Chatterjee’s EC Block home.

Chatterjee, who will celebrate his 100th birthday on June 5, lives alone. He had told a civic official who had visited his house recently to enquire about his health and to find out if he needed any essential items that he wanted to donate “something” to help in the fight against the novel coronavirus.

“This is an unprecedented crisis and we simply cannot sit back and do nothing in the hope that it will pass. I had witnessed first-hand the impact of the Bengal famine in 1943,” the 99-year-old who walks without any help said. “I was just into my first job… I have some very disturbing memories of the famine.”

“Back then people had to walk for miles begging for food and rice starch. I remember people fighting over the smallest of morsels. The times have changed but this is very similar… we are facing a disturbing situation,” Chatterjee said.

His son Sabyasachi, 72, lives in Delhi and his two grandsons are in Mumbai. The elder of the two, Deep, 42, stays and works in Mumbai. Sayan, 32, works for a bank in Hong Kong; but he is stuck in his brother’s house because of the lockdown, Chatterjee said.

His neighbour Manjusha Das Ghosh said she had been thinking of donating to the fund but decided to go ahead with it after word reached her that Chatterjee had got in touch with councillor Roy.

Both Chatterjee and Ghosh said they contributed to the relief fund as they felt it would be more effective in the fight against the virus.

Minister Bose, who is also the Salt Lake MLA, said he was moved by the gesture. “Times like these bring out the best in us. I hope their contribution will inspire others to step forward and help.”