BT Road, the EM Bypass, Diamond Harbour Road and JL Nehru Road were among the busiest on Tuesday 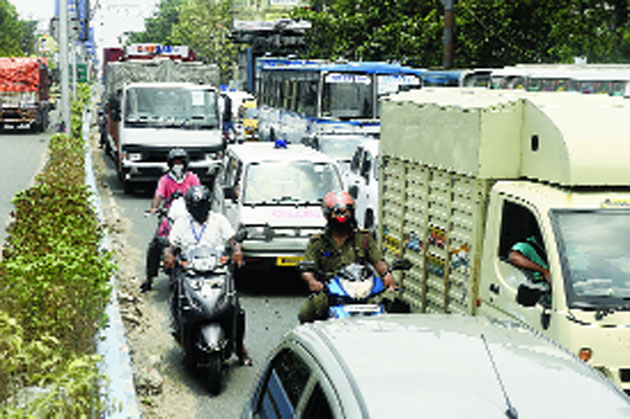 Police have been asked to be more stringent in checking vehicles from Wednesday as Tuesday witnessed a surge in traffic across some of the city’s thoroughfares.

The city’s traffic witnessed a nearly 20 per cent surge on Tuesday compared to other days during the lockdown, revealed an assessment of the traffic situation carried out by officers at Lalbazar during the day.

BT Road, the EM Bypass, Diamond Harbour Road and JL Nehru Road were among the busiest on Tuesday.

Traffic movement peaked between 9.30am and 11.30am on Tuesday, the police said. Many of the vehicles out on the road were self-driven cars.

Senior officers at Lalbazar overseeing traffic movement held a meeting with their counterparts across all the traffic guards late on Tuesday afternoon and laid down guidelines for stringent checking of vehicles.

The police have been asked to find out more strictly if someone is out on work or without any specific purpose.

“Anyone out on the road in a vehicle will have to clearly explain why he or she is out,” a senior police officer said. “They must be able to produce an identity card and some document from the office showing he is office-bound. They must also be able to show a vehicular exemption pass.”

Vehicle exemption passes are available on: https://coronapass.kolkatapolice.org, the police said. One has to fill in an application form online and download the pass. The pass will be valid for the prescribed route and for the period.

office timings of 10am and 6pm.

“All vehicles will be strictly checked for proper documents. Going to office can’t be an excuse,” a police officer said. “All officers and constables have been advised to wear gloves, face covers and masks on duty to minimise chances of infection.”

A few companies with offices in Salt Lake and Sector V have spoken to some transport department officials, asking if arrangements can be made to ferry their staff. Officials are yet to decide on the matter.

“The government directive speaks about movement only within green zones, not in any other zone,” said a transport department official.