Calcuttan recives pat from the Queen for repatriating British nationals

The UK repatriated nearly 18,000 travellers from India on 66 charter flights, from 11 Indian cities, including Calcutta, between April and June 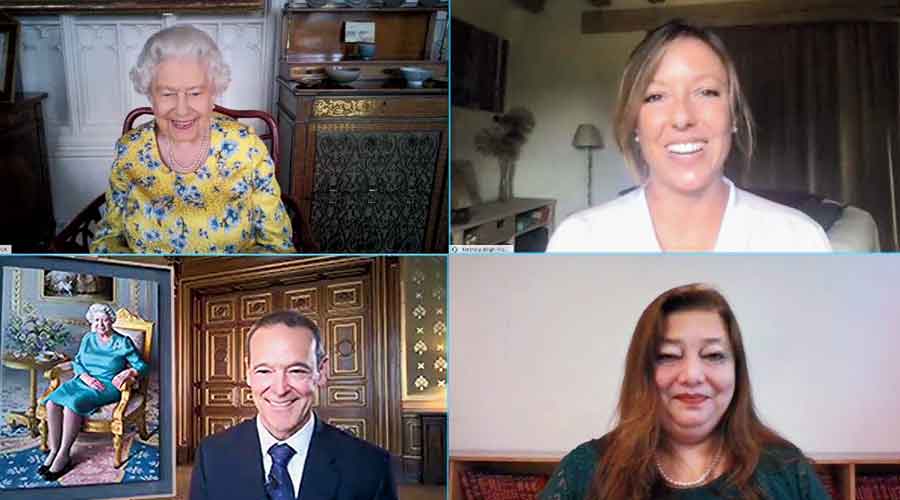 A Calcuttan who played a key role in repatriation of British nationals from eastern and northeastern India in the middle of a nationwide lockdown forced by the Covid-19 pandemic got a pat from Queen Elizabeth II last weekend.

Sanjibita McDonald Tariang Sen, regional consular development officer at the British deputy high-commission in Calcutta, was part of a virtual session with the Queen on Friday, where she narrated her experience of helping stranded British travellers get home during India’s lockdown.

The UK repatriated nearly 18,000 travellers from India on 66 charter flights, from 11 Indian cities, including Calcutta, between April and June.

Friday’s session included the unveiling of a portrait of the Queen. The 94-year-old Queen saw the painting for the first time on her computer screen.

Simon McDonald, the host for the session and permanent under-secretary of state for foreign and commonwealth affairs and head of the diplomatic service, introduced Sen after talking about the scale of the repatriation efforts.

“Around 1.3 million were helped home and 38,000 came on chartered flights. The single biggest element was the effort in India…. We have Sanjibita McDonald Tariang in Calcutta and she was central to that effort,” he said.

Sen said her role was to “manage the consular response for east and northeastern India… to plan the individual repatriation journeys because the area that we covered was huge”.

“It took a minimum of three days to travel by road. Also, to liaise with the government authorities, manage issues at the state borders, at the check posts and also managing… smooth transition for the nationals,” she added.

“A lot of people go to India to visit,” the Queen said.

Sen went on to share “one of the longest journeys of the repatriation”.

“There was a young British national stranded in a very remote village in Nongman in Manipur in the northeastern part of India…. All her essentials were running out. The entire country was under a nationwide lockdown. We had a complete lockdown for 67 days. Very, very difficult situation. With the use of local contacts, I managed to persuade the superintendent of police in Ukrool who then… organised his own car to help a British national travel right from Nongman village to Imphal and then to Guwahati where there was another car waiting to take her to Delhi. A real satisfaction to see her arrive in Delhi safely to be able to take a flight.”

The Queen replied: “It must have been very wonderful for you to have achieved that.”

Speaking to Metro from her home in Boral, on the southern fringes of the city, Sen said she was “quite nervous” before the session.

“But the Queen’s warm smile calmed my nerves and put me at ease. She was very sweet,” Sen said.

Sen, in her 40s, was born in Guwahati and raised in Shillong. “My mother has Scottish lineage. Her father was from Scotland. My father is from Shillong,” she said.

Sen is married to a Bengali from Alipurduar. The couple have two daughters.

Sen is not new to handling crises. In the past, she has been part of repatriation efforts of British nationals during the 2008 Mumbai attacks, 2015 Nepal earthquake and 2019 Easter Sunday bombings in Sri Lanka.