In Salt Lake, people from Dakshineswar, Baranagar and Burrabazar had lined up outside a liquor store 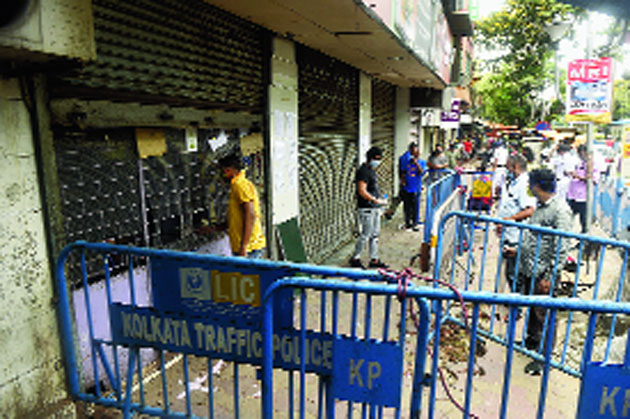 The queues outside liquor stores got longer on Tuesday as people travelled from faraway places and stood for hours to buy liquor.

In Salt Lake, people from Dakshineswar, Baranagar and Burrabazar had queued up outside a liquor store.

A young man who lives near Peerless Hospital travelled to Garia after he found the liquor store closest to his place shut, only to find a 2km-long queue of stones, bags and handkerchiefs kept in marked circles — almost an hour before the store was to open. He returned empty-handed.

Police officers on the city’s southern outskirts said several people who have been collecting relief material from cops during the lockdown were spotted standing in the liquor line in Sonarpur area.

On Monday, thousands of people had stepped out of their homes to queue up outside liquor stores. Cops were seen managing crowds, drawing circles for people to stand in them and even standing in queues at some places to end the line so that shops could be closed on time.

On Tuesday, the police tried to scan through the crowd to eliminate “outsiders”.

In Salt Lake, cops started asking for identity documents from those in the queue near City Centre and allowed only the township residents.

“We found many people from the sealed areas of Shyambazar, Burrabazar, Teghoria and Kaikhali queuing up in front of liquor stores,” an officer of the Bidhannagar commissionerate said.

Some had reached from Baranagar and Dakshineswar, he said.

On Rashbehari Avenue, the police deployment was less than Monday’s. An officer said it was not possible to engage half the police station on “liquor duty” every day. “Teething troubles are normal on the first day. Things will gradually fall in place just like the lines outside grocery shops,” the officer said.

In the New Market area, the first 100 people in a queue were given tokens around 5.45pm. The rest were asked to return home. This was done to avoid rush or crowding when the shop would close, the police said.

The police have been asked to ensure that distancing rules are followed outside liquor stores, state home secretary Alapan Bandyopadhyay said on Tuesday. “We have spoken to the police and will talk again. Lockdown norms have to be followed. Just like a system was prepared for shops of essential supplies, we will talk to the state and city police to make similar arrangements.”