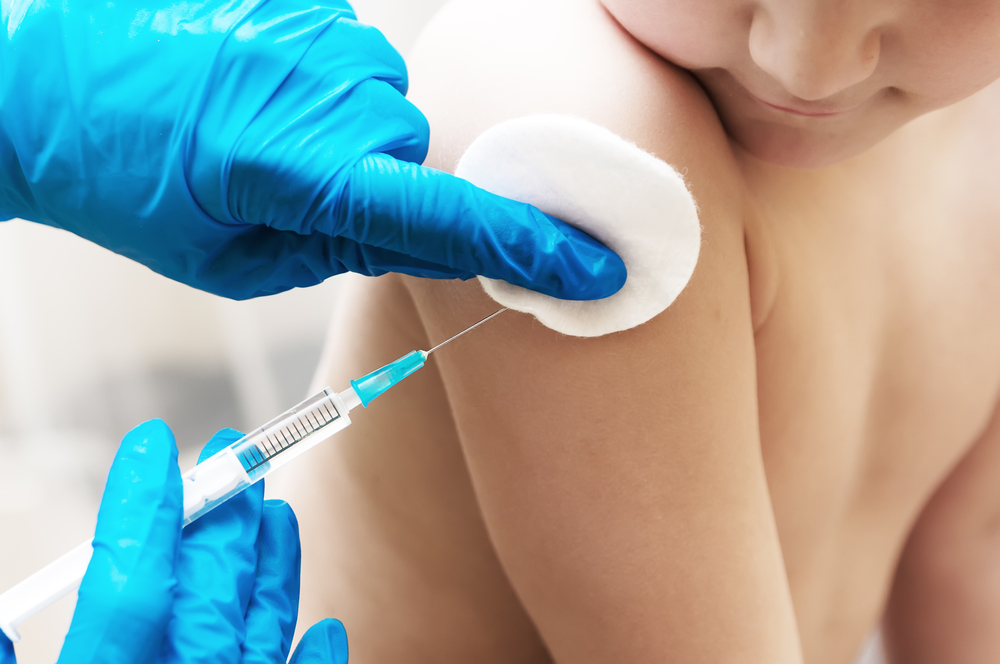 Many toddlers in the city are yet to get their scheduled vaccines because several private clinics are still shut.
(Shutterstock)
Debraj Mitra   |   Calcutta   |   Published 05.05.20, 11:03 PM

The lockdown forced by the novel coronavirus has taken a toll on the immunisation of children.

Most toddlers had missed the scheduled vaccinations in the first phase of the lockdown because of an advisory by an umbrella association of paediatricians, recommending that vaccinations be postponed till March 31, said several paediatricians in the city.

However, once it became clear that the lockdown was going to be a lengthy affair, the association issued another advisory, asking doctors to resume scheduled vaccinations following certain guidelines.

But many toddlers in the city are yet to get their scheduled vaccines because several private clinics are still shut. Their parents are worried and online paediatric queries have multiplied manifold.

A 36-year-old woman in New Alipore, mother of a 17-month old girl, is looking for a paediatrician who can administer the Varicella vaccine, also known as chickenpox vaccine, to her daughter.

“The vaccine was due in April. The doctor who administered the previous vaccines has shut his clinic. When I called, he said he would not start the clinic before the lockdown is officially lifted,” said the woman, who teaches in a girls’ school.

The doctor is above 70. He said he was taking “extra precaution because he was in the vulnerable age group”.

A 29-year-old mother in Salt Lake is worried because her 10-month-old daughter is yet to get the MMR-I vaccine, for protection against measles, mumps and rubella. The vaccine was due in April.

She takes her daughter to a private hospital for vaccinations but the schedule has gone haywire because of the Covid-19 crisis. “Going to the hospital is a problem. Also, I cannot discount the risk of infection at the hospital. But the doctor has said she would not resume her private clinic before May 21,” she said.

“Vaccines can be classified into three broad types according to how important they are in the wake of this pandemic outbreak. The absolutely essential primary vaccines should ideally be administered to newborns before they are released from the hospital. The vaccines like triple antigen, polio and rotavirus vaccines, due in periodic intervals over the first few months, are also non-negotiable. The vaccines for lungs and the respiratory tract — for protection against influenza and pneumonia — should also be ideally not delayed because weak lungs would make a baby more vulnerable to Covid-19,” said Jaydeep Choudhury, a paediatrician associated with the Institute of Child Health.

“The vaccines for water-borne diseases, like typhoid and hepatitis, can wait for a while,” said Choudhury, chairperson of the infectious diseases chapter of the Indian Academy of Paediatrics (IAP).

The IAP had issued an advisory in the middle of April, including some “general instructions for vaccination clinics” in the wake of the Covid-19 crisis. This was after a first advisory postponing the vaccinations till March 31.

The new guidelines recommend that “a polyclinic/ nursing home/ hospital should have segregated vaccination areas with separate entrance and exit” and “it is essential to stager appointments to avoid crowding at the clinic”.

Doctors who have resumed vaccinations said they were working according to the IAP guidelines. “My chamber can accommodate 10 children and their parents following social distancing norms. I am asking the parents to take prior appointments and adhere to the timings. Some of them are waiting inside their cars parked on the road and entering the clinic when their turn comes,” said Apurba Ghosh, the director of the Institute of Child Health. His clinic is in Ballygunge.

Worried about their children’s immunity being compromised amid the coronavirus pandemic, the parents are rushing to online platforms. “Online paediatric queries witnessed a growth of 350 per cent since March 1,” said a spokesperson of Practo, a digital healthcare platform.

“Cough and cold in babies and the impact of delayed vaccination during the lockdown were among the top queries,” the spokesperson added.

Priti Khemka, a pediatrician associated with the Bhagirathi Neotia Woman and Child Care Centre and the digital platform, has handled many online queries over the past month. “Some children have their booster shots (additional dose) due. I have told parents that the main focus should be on primary vaccines. The booster shots can be delayed for a while,” she said.

The World Health Organisation has also warned countries against letting their guard down on immunisation of children while fighting the novel coronavirus. April 24 to 30 was the World Immunisation Week.