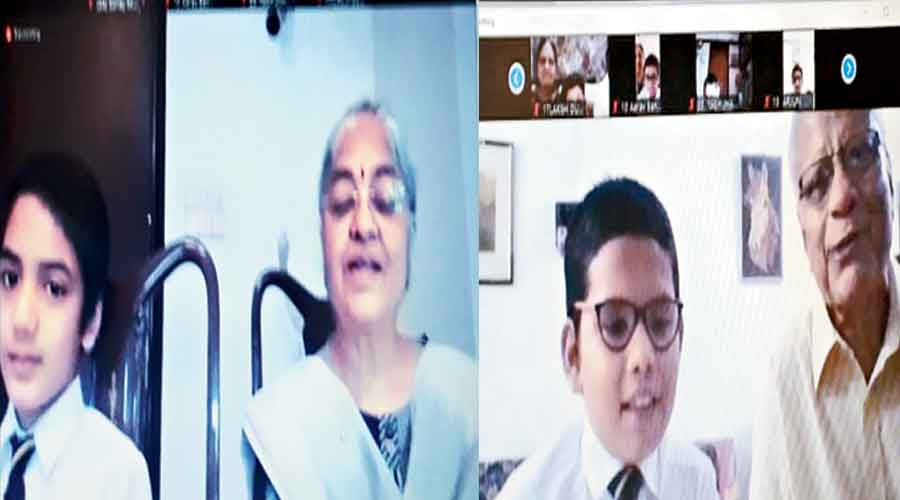 Grandparents took centre stage with their grandsons seated beside them during an online class of La Martiniere for Boys on Friday morning.

Some looked dapper in formals and some had turned up in pearls. It is not daily they are invited to their grandsons’ class, albeit virtually. On Friday, the school celebrated Grandparents’ Day for Classes I to V and the bond children share with their grandparents was visible on the screen.

Some felt shy to face the screen. Their grandkids, now “pros” got them in front and adjusted their positions so that they would be visible to the class. A few even nudged them to speak.

Each class had the celebration in the first period that started at 8.30am. The Grandparents’ Day is an annual event in the school calendar that is held in July.

“We want children to realise and acknowledge the importance of grandparents and teach them to be grateful for their contribution in the lives of children,” John Rafi, the school principal, said. “Everything has been online this year so far and we are trying to follow the school calendar as best as we can.”

“In such times we are all so drained… but technology has become a window. The school made an effort to wish us and at the same time teach them,” Sarita Dhir, 59, whose grandson is eight years old, said.

Preparations began a couple of days ago and children were asked to make cards for their grandparents.

The class began with a short address by the headmistress, a cultural programme and then the children stood up to pray for their grandparents, which “moved” some of them.

Teachers in the first period conducted the celebration in their class, making the grandparents feel at home and inviting them to speak. Some thanked the teacher for the programme and some for the online class during the pandemic.

From “dadu esho” to adjusting the microphone for them, the little ones were in complete control.

They are tiny but so mature… we could see the pride they felt in sharing the screen with their grandparents. A few of them sent us messages that their grandparents don’t live with them,” Itu Chandak, a Class III teacher, said.

In many homes grandparents are around but neither they nor others realise how important they are to the family.

“You lead them to the right path holding their hands. You, grandparents, are important to children in so many ways. You have patience and time when parents are too busy. You have stories to tell and interesting games to play,” Norma D’Silva, the headmistress, said in her address.

“We are so close to our grandkids but we are often taken for granted because we are always around,” a grandmother said.