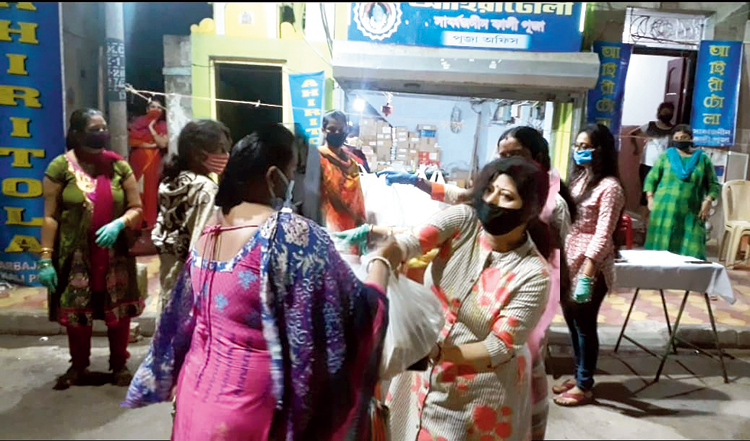 A group of 30-odd women, including professionals and homemakers, have been procuring and distributing essential items among the needy in their north Calcutta neighbourhood.

“We have been working as a team for many years now. We thought we needed to do our part to help the poor, at least in our locality,” Kajol Roy, who is involved in their family business of managing a ceremony hall in a north Calcutta neighbourhood, said.

The band of women, aged between 18 and 65-plus, are all residents of the same Ahiritola locality. They have celebrated festivals and done social work together and are now spending hours in collecting funds and essential items to help the needy during the lockdown.

The youngest is a Class XII student while the oldest is above 65. She has been following the government advisory and staying indoors but she helps the team financially, one of the members said.

For mother and daughter Shanta, 55, and Sushmita Dhar, 30, this is one of the many projects they have been working on together.

“I have grown up seeing my mother work for people. When I grew up, I wanted to help her. She was very happy. Now, we are working together on this,” Sushmita, whose family owns a glass business in central Calcutta, said.

The women have been distributing packets containing rice, two types of edible oil, soya chunks, a packet of biscuit, a bar of soap, eggs, wheat flour, pulses, bread and a packet of noodles. “The noodles have been included specially keeping in mind the young boys and girls at home,” Sushmita said.