Lockdown restrictions to be imposed from 5pm on Thursday 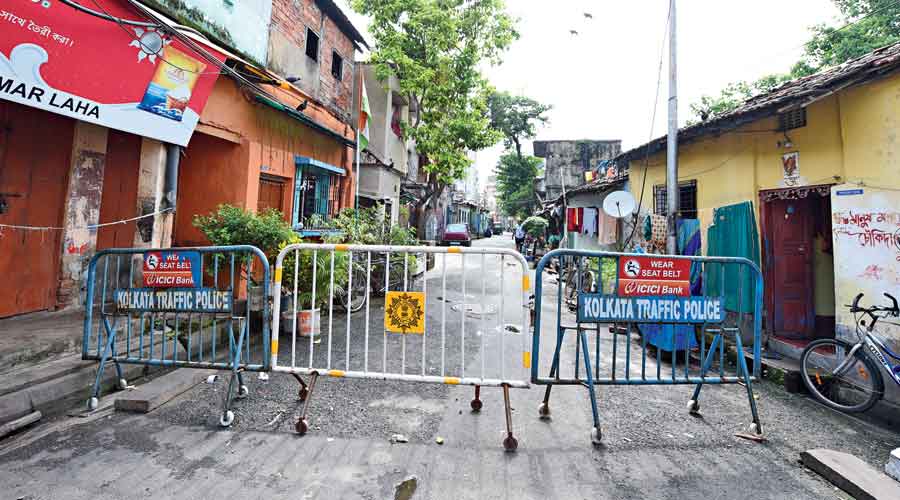 Barricades at the entrance to Maratha Ditch Lane in north Calcutta on Tuesday afternoon. Police have placed the guardrails to prevent residents from moving in and out of the area to slow down the spread of Covid-19.
Gautam Bose
Monalisa Chaudhuri And Subhajoy Roy   |   Calcutta   |   Published 08.07.20, 01:35 AM

Twenty-eight locations across the Calcutta municipal area have been earmarked as containment zones, Firhad Hakim, the chairman of the Calcutta Municipal Corporation’s board of administrators, said on Tuesday.

According to a new Bengal government notification, the “buffer zone” around the existing containment zones would become part of the new containment zones, where several lockdown restrictions will be imposed from 5pm on Thursday.

The revised list of containment zones was not uploaded on state government and CMC websites at least till 11pm on Tuesday.

Speaking to officials of the civic bodies and police in Calcutta, Bidhannagar, Barrackpore and Howrah, it seemed the mode of implementation of the curbs in the containment zones were yet to be finalised till late on Tuesday. Metro tries to answer some questions uppermost in people’s minds.

Advertisement
What is the change?

Parts of the city where multiple cases have been reported within a small area are likely to be again under lockdown. Over the past few weeks, as restrictions were lifted, the size of containment zones was reduced.

The authorities were sealing off only the affected building or flat from where a positive case was reported, leaving everyone around without any restrictions on movement. But Tuesday’s order, signed by the state home secretary, spoke about “broader containment zones”.

The order added that “all offices, government and private”, “all non-essential activities”, “all congregations”, “all transportation”, “all marketing/industrial/trading activities” may be stopped in the containment zones.

What is a buffer area?

According to the notification, the buffer area will become part of the containment zone and containment restrictions will apply in the entire area.

How do I know if the place where I stay or where my workplace is located is a containment zone?

According to the notification, the broad-based containment zones will be shared on the respective district’s official website, in addition to the Egiye Bangla website: https:// www.wb.gov.in/index.aspx

On the left of the home page of the Egiye Bangla website, there is a menu “District Wise Affected Areas (Containment Zones)”. Click on it and see the district-wise divisions. People living in Salt Lake, New Town, Barrackpore and Barasat should check the North 24-Parganas district list, while those in places like Kamalgazi, Narendrapur and Sonarpur should check the South 24-Parganas list.

The list of containment zones in Calcutta is updated on the website of the Calcutta Municipal Corporation — https://www.kmcgov.in/KMCPortal/jsp/KMCPortalHome1.jsp. On the right side of the home page, there is the menu “Quick Links” under the picture of Firhad Hakim. The first item is “Kolkata Containment Area”.

How many containment zones are there in Calcutta?

Hakim mentioned 28, but according to the July 1 update on the CMC and government websites, there were 18 in the Calcutta municipal area. Several documents were circulating on social media with names of more places. But senior police and CMC officials said no decision on a final list had yet been taken. “The new inclusions will be decided on Wednesday and Thursday,” said a CMC official.

What restrictions do I expect in these containment zones?

During the first phase of the lockdown, restrictions were imposed on movement of people entering or leaving containment zones, except in an emergency. If the same norm is applied, there could be restrictions on stepping out of home without any valid reason and movement of private vehicles. Restrictions could also be imposed on unnecessary visits to local vegetable markets.