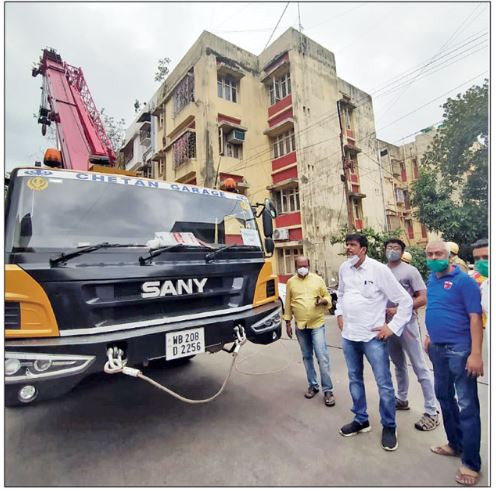 Sujit Bose supervises the removal of uprooted trees in Karunamoyee Housing Estate on May 25
Telegraph picture
Snehal Sengupta   |   Published 05.06.20, 10:36 AM

Fire and emergency services minister Sujit Bose, who is also the MLA from Bidhannagar and had tested positive for Covid-19 on May 28, was admitted to a hospital off EM Bypass on Wednesday.

According to one of his close aides, Bose had complained of fever and breathlessness before getting admitted.

Bose was under home quarantine since last week after he tested positive for coronavirus along with his wife and domestic help.

His son’s test result had come out negative initially but he tested positive after doctors advised him to undergo another swab test.

“Dada was initially without symptoms but when he complained of fever and shortness of breath, we admitted him to the private hospital,” the aide said, referring to Bose.

With the minister testing positive, more than 75 persons, including senior fire department officials, who came in contact with him were advised to stay in home quarantine.

Bose had visited several areas in Salt Lake, Lake Town and Dakshindari with fire and emergency services teams to supervise the removal of fallen trees.

Among the sites he visited in Salt Lake to oversee the removal of trees was Karunamoyee Housing Estate, CA Block and places along the EM Bypass near Duttabad.

He had come in contact with at least two councillors including Rajesh Chirimar and Nirmal Dutta during these efforts. Dutta told The Telegraph Salt Lake that he underwent a test on Friday and his test results came negative. Chirimar said that he was “doing fine” and had not developed any symptoms.

Ranjan Poddar, a Karunamoyee resident who had helped Bose organise the tree-removal efforts in the housing estate, said that he too had undergone the swab test. “My test report has come negative. It is a big relief,” said Poddar.

Bose’s test report sent the residents of Baisakhi Abasan into a tizzy as his car is parked there for the past several days. “The car has not been sanitised. There is nobody around as well,” said Pradip Chakraborty, a resident.

Bose’s aide said that Bose’s driver stayed in Baisakhi. He had driven the car home and parked it there. The driver too is under home quarantine and his Covid-19 test results are awaited, the aide said.

Jaydev Naskar, another councillor of the Bidhannagar Municipal Corporation, had organised a yajna to pray for Bose’s speedy recovery. However, once the photographs of the event circulated in social media, there was criticism. According to party sources, Naskar has been rapped by the party leadership.

An elderly resident of Labony Estate tested positive for coronavirus and is admitted in Belle Vue nursing home. The apartment building was sanitised by the civic body on Wednesday.

Another man in his seventies has tested positive for Covid-19 in AH Block. So have a 31-year-old man and a 60-year-old woman in Duttabad.

In New Town, a resident of BC Block expired before his Covid-19 report came out as positive. A middle-aged man, who was a tenant in an apartment, fell ill after returning from hospital where he had gone for dialysis. He was admitted in Medical College and Hospital, where he expired the same day.

“He used to go for dialysis regularly. On returning home this time, he developed diarrhoea and breathing trouble, and had to be taken back to hospital. His Covid-19 report came on May 24, two days after he passed away. His wife and son have been quarantined in Barasat. The building has been contained,” said Naren Chakraborty, president of New Town BC Block Cultural Association.

A resident of BA Block in New Town, who suffered a fracture when a window pane smashed on him on the night of cyclone Amphan, had tested positive for Covid-19 initially on hospitalisation but his second test report has come negative.

Another case has been reported from New Town’s DA Block.