CNG buses make debut in Calcutta, to ply from Tuesday

The vehicles would start ferrying passengers between New Town and Howrah 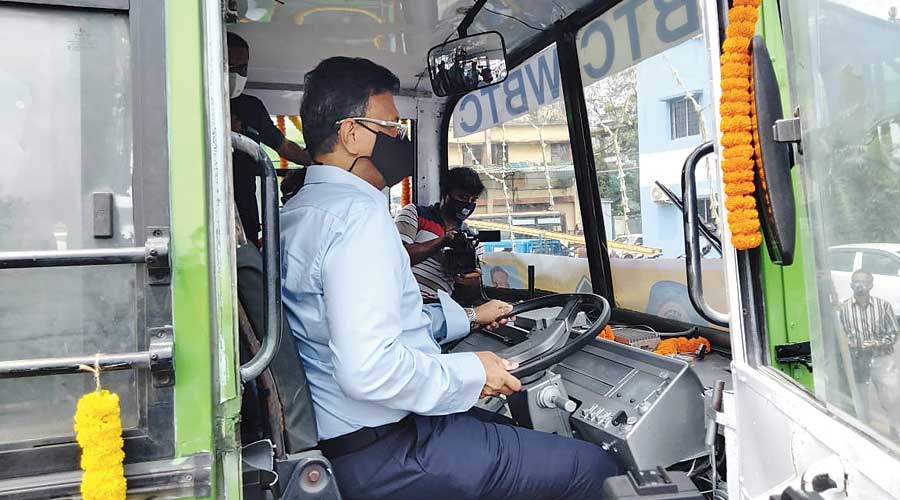 Transport minister Firhad Hakim at the trial run of the CNG buses on Monday.
Telegraph Picture
Our Special Correspondent   |   Calcutta   |   Published 10.08.21, 03:31 AM

The state government on Monday started the trial run of two CNG-operated buses as part of the transport department’s initiative to replace a large number of diesel-powered buses with environment-friendly ones.

Senior officials in the transport department said the city’s first CNG buses would start ferrying passengers between New Town and Howrah on Tuesday.

Transport minister Firhad Hakim said the city would soon have a fleet of either battery-run or CNG-powered state buses.

“Apart from reducing pollution levels, the operational costs of running buses will come down significantly (once battery- or CNG-powered vehicles are introduced),” Hakim said at the launch in Kasba on Monday.

“If needed, we will go back to the company, with whom we have entered into an agreement, and ask them to make modifications to the two CNG buses,” said Rajanvir Singh Kapur, the managing director of the West Bengal Transport Corporation.

On June 21, the state government had signed an agreement with the Bengal Gas Company Limited (BGCL) for introducing CNG buses after setting up refill stations.

The first station will be operational at the Kasba depot by December.

Over the next five years, the BGCL will set up CNG facilities in various government bus depots and other similar facilities. Eight bus depots have been identified where CNG stations will be set up in the first phase. They are in Salt Lake, Thakurpukur, Barrackpore, Belghoria, Howrah, Santragachi, Karunamoyee and Kasba.

Officials of the transport department said introduction of CNG would result in considerable slashing of expenditure as the fuel cost would come down by 25 to 30 per cent.