CMDA moves Supreme Court for Chhath at Sarobar with conditions 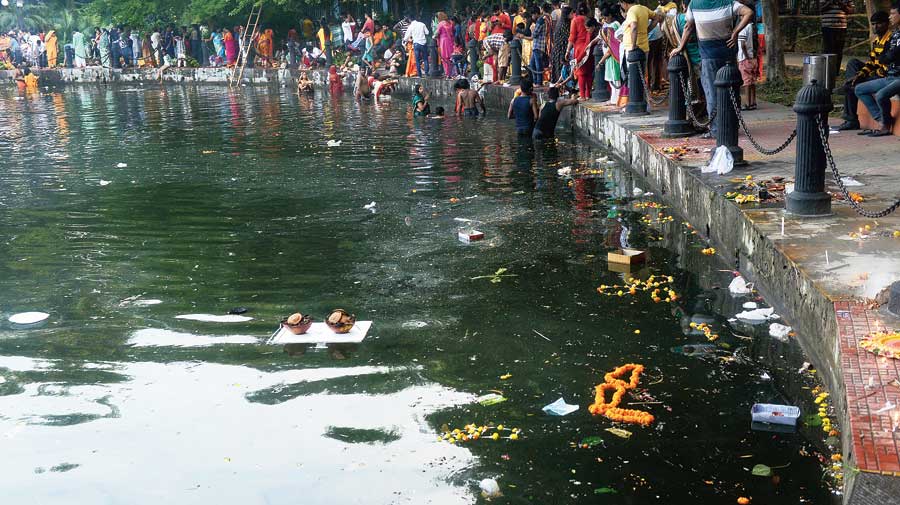 The Calcutta Metropolitan Development Authority (CMDA) has filed a petition in the Supreme Court requesting permission for Chhath Puja at Rabindra Sarobar.

Many people have objected to the performance of rituals in the water body because of “serious ecological consequences”.

Blue moon: The second full moon of this month, that some sky watchers called the “blue moon”, seen from the EM Bypass around 7pm on Saturday. The moon is not going to look blue, Debiprosad Duari, the director (research and academic) of MP Birla Planetarium, had said. “In modern parlance, a blue moon is the second full moon in a calendar month. The time between one full moon and the next is close to the length of a calendar month. So, the only time one month can have two full moons is when the first full moon happens in the first few days of the month, in this case on October 1.” But the original concept of a blue moon is part of folklore and practices of the medieval agrarian society, Duari said.
Pradip Sanyal

Banerjee had earlier moved the National Green Tribunal to seek a ban on the puja rituals at the Sarobar.

The CMDA, the custodian of the 192-acre Rabindra Sarobar that comprises a 73-acre water body, had moved the tribunal to seek a relaxation on the ban on all pujas on the Sarobar premises.

The tribunal had refused to hear the CMDA’s plea to allow Chhath Puja when the matter came up for hearing on September 17. “You should feel happy that we are not imposing the cost,” the tribunal had said while rejecting the CMDA’s petition.

Several Calcuttans had then questioned whether CMDA, which is responsible for the Sarobar’s protection, should engage in a legal battle to allow puja rituals in one of the city’s few remaining green spaces.

“There is a tradition of bodies that are meant to protect not doing their job in Calcutta. This is not an aberration, but it should be countered and opposed. People should continue to oppose as long as such bodies and government organs that have been entrusted with a certain duty do not do that,” author Amit Chaudhuri had told Metro.

A CMDA official on Saturday said the organisation’s petition in the Supreme Court mentioned it was ready to allow Chhath Puja at Rabindra Sarobar with some conditions. “We will clean the place immediately after the rituals. We will not allow bursting of firecrackers or performance by DJs.”

Previous experiences, however, suggest something else, according to Sarobar regulars.

The tribunal had in 2018 banned all pujas, community picnics and social events on the Sarobar premises. But in 2018 and 2019, performance of rituals were allowed in the Sarobar waters.

In 2018, neither the police nor the CMDA had done anything to stop entry of devotees. In 2019, the CMDA had fixed locks and cops had been posted at the gates of the Sarobar. But when devotees had broken the locks, cops had looked the other way. Once inside, many had taken to bursting firecrackers and beating drums, and lighting diyas in the water.

Every year birdwatchers observe birds missing from the Sarobar a few days after Chhath Puja, many birdwatchers said.

CMDA lines up measures for Sarobar